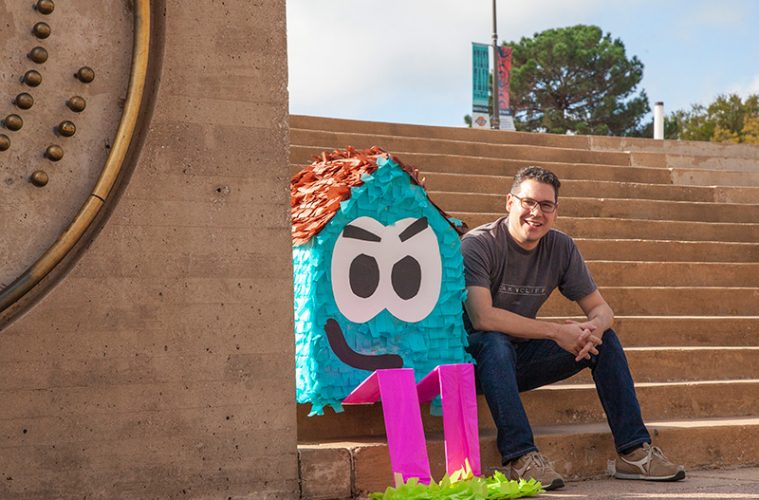 Giovanni Valderas poses with his newest version of his piñata sculpture ¡Piñata Listo!, which translates into Piñata Ready, symbolizing his run for Dallas City Council. Photo by Rachel Rushing.

How much can art do? In a way, this question animates the work of many artists whose work is socially and politically engaged. Can art save a house? Can it transform a neighborhood? Can art help the environment? Can it increase safety? Can art save lives? Giovanni Valderas’s practice is pushing to discover these answers, and may be expanding the definition of what it means to be an artist in the process. 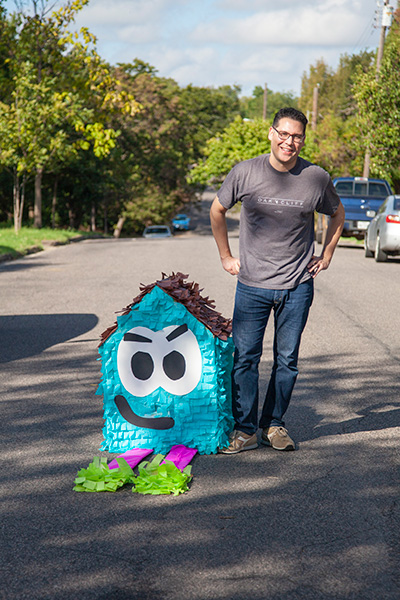 Giovanni Valderas stands next to his piñata on the block where he grew up. Photo by Rachel Rushing.

Giovanni Valderas is a Dallas-based artist who is running for City Council in 2019 to represent his district in North Oak Cliff. Valderas is familiar with multiple parts of the art world. He is an artist, a curator, and assistant director of Kirk Hopper Gallery. Valderas says that running for city council “is a natural progression for (his) practice…having seen the limits of advocacy.” He says, “I’m not a developer, I’m not rich, I’m not trying to get rich;  I think people really want a genuine voice and to know that there is someone at city hall who will always vote in their favor.”

Upon graduating with a MFA from UNT in 2012, Valderas embarked upon a traditional art career as a painter, scoring solo shows at both Cohn Drennan Gallery and Art League Houston in 2013. At that time Valderas was making what he called “cultural constructs,” paintings that combined both his Latin American heritage and characters from the television show Gomer Pyle, USMC, which he watched as a kid. “A lot of people didn’t recognize who they were, and I liked that as well…this kind of cloaking that was happening.“

Teaching at Mountain View College would change Valderas’s trajectory and career. “The stuff I was making was portraiture. It was ready for the gallery scene,  but we live in this bubble in a sense and regular people don’t get the work.” While Valderas was teaching art appreciation to young people and adults, many of whom grew up in the same Oak Cliff neighborhoods that he had grown up in, he saw them struggling to understand contemporary art. This experience inspired him to make both his classes and his work more relatable. “I started shifting into Spanglish, and placemaking, and going out and finding locations, bringing art to them, and it became very liberating because now my gallery space was the neighborhood.” 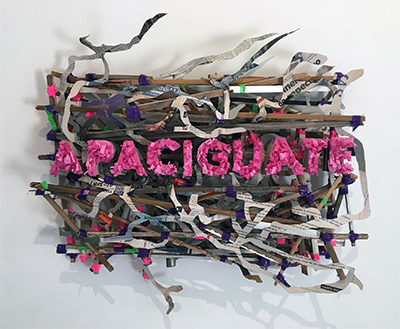 In 2016, Valderas’s text-based paintings using pinata-like materials with words like “No Hay Pedo” began to be installed next to real estate signs in his rapidly- gentrifying neighborhood in Oak Cliff. “For me it was about this relationship between two different cultures, one manufactured, one authentic. I was interested in what they were saying to each other and what they were broadcasting to the community.” Yet Valderas felt that the real estate sign paintings were too limited, and only spoke to one community. During this time Valderas was serving as Vice Chair of the Dallas Cultural Affairs Commission and going to many community meetings, where he was learning about the affordable housing crisis in Dallas. He decided it was time to create a new, more universal, object. “I wanted to create some kind of object that was comedic, but allow people to empathize with it,” he said, and thus his casitas were born. 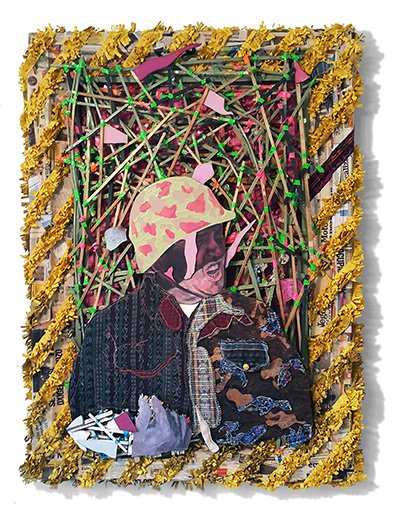 From the beginning Valderas’s work has been cloaking things. His loveable, Murakami-inspired Casita Tristes, cloaks the serious issues of affordable housing and gentrification. His run for city council as an artist, cloaks his competitors for taking him seriously—allowing him to run a stealthy, people powered campaign, that will center creativity, his fellow creatives, and the Latino community. Perhaps the most important thing his run for city council cloaks is the art. Although his Casitas (with an upcoming series of Casita Listes to join his Casitas Tristes) are definitely art objects, at this point they function more like props in a play. Another part of the play are the community meetings he is conducting, like Horchata Nights. Inspired by a series in Ft. Worth by social practice artist Arnoldo Hurtado Escobar Messy, Horchata Nights invite community members to learn about important but glaze-worthy topics like zoning in a fun environment. Valderas’s campaign will feature art workshops with fellow socially-engaged artist Angela Faz, where community members will print their own t-shirts and yard signs for the campaign. Artist lauren woods coined the hashtag #chanclasquad for those who are supporters of Valderas’s campaign. Artist Vicki Meek is organizing the mobilization of the creative community to engage and turn out new voters for his election. From Gomer Pyle to widespread revolution with real stakes and real wins for his community on the line—it has been a heady journey for Valderas.

Valderas sees a movement and is urging artists everywhere to consider running for public office. “Some of the smartest people I know are artists. They are brilliant. If we could use their creative abilities and minds on policy and how it affects our communities and what they can bring to table that’s different than real estate people and business people…when you have that different thought process, it just makes everyone better,”