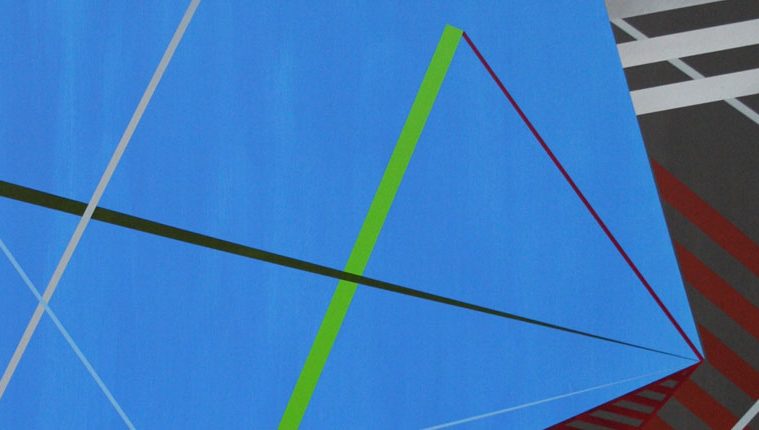 An ongoing local parlor game, in which participants try to locate the Houston in Houston art and ask whether there is such a thing, reared its head again in recent months when Houston painters Aaron Parazette and Howard Sherman curated group shows of work by local colleagues and protégés. (Some galleries declined to let their artists participate in Parazette’s expansive show; Sherman’s selection of painters was smaller at just a half dozen.)

Now a new solo show by Jonathan Leach, a painter of hard-edged, architectonic abstractions and cityscapes who was included in Parazette’s In Plain Sight, offers as good an excuse as any to raise the subject again. In the case of Leach, who was a relatively new arrival when I first saw his work in the Blaffer Art Museum’s 2008 Houston Area Exhibition, his second Gallery Sonja Roesch show raises the question: Is there more of Houston in Leach’s work than there used to be?

It’s not that I read discernibly local visual references in the selection of paintings, plexiglass sculptures and ink-and-pencil collaged-vellum drawings, all but one of which?the Day-Glo-saturated Recent Resonations (2007)?were made since 2011. Sure, you could point to Houston’s aspirational architecture and its blinding, bleaching summer light as possible influences on Arcane Arcade (2013), in which Leach’s vivid colors have been relegated to the outlines of a sleek, soaring structure’s white, off-white and pale gray planes (wonderfully mirrored in the drawing collages on view).

Or you could refer to the signs of smog in a nevertheless-crisp, untitled 2011 painting or of urban blight in the partially spray-painted sculpture C.I.T.E. Object (2013) but neither quality is distinctly Houstonian. Nor does Leach’s apparently new – and welcome – willingness to let the night into both that sculpture and the paintings Dark Device (2011) and Broken

“I am definitely becoming more influenced by Houston, not just with reference to architecture, but also in reference to the overall philosophy of development in this city,” Leach wrote in a Facebook message. “No zoning, a tendency to erase the past and promote the future, and the attempt to order the ensuing chaos.”

Leach added that he was also attempting to convey personal moods in the newer works and that the show’s title, Time Does Not Exist Here, “has many different meanings for me, but the strongest relate to Houston being constantly under development, progressive in some areas and backwards in others, and the influence that this city has on my process and the freedom to experiment on new techniques, while reworking older ones.”

The no-zoning influence can perhaps most readily be sensed in Untitled (2012), a cacophonous vertical composition of jostling, hard-elbowed planes. Its top third is dominated by a Leach rarity, an organic shape – an inverted thimble, painted bright red and split by a zigzagging diagonal. At the opening, a fellow Houston painter joked that Leach must have had to knock back a drink and take a walk around the block in order to force himself to paint that shape.

They’re made in Houston and influenced by Houston. So are they Houston works, or simply works made in Houston (or does it depend on who’s buying and where)? Those questions aside, the dialogue between Leach’s paintings, Plexiglas works and drawings underscores recurring spatial and conceptual concerns in a way that delivers on previously established expectations while opening up room for new ones.