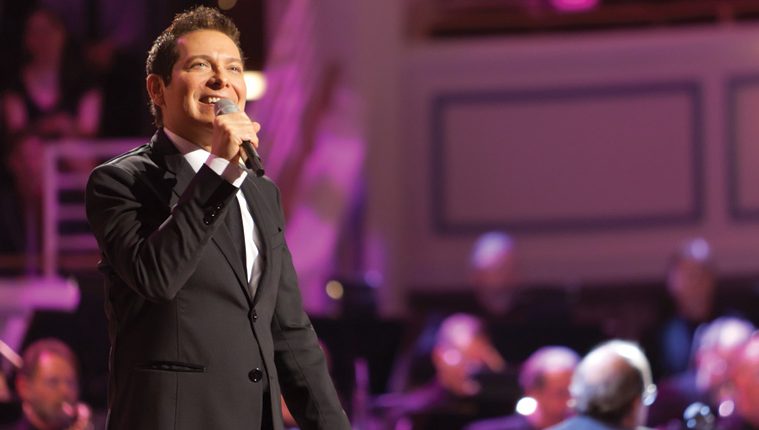 Just One of Those Things

It proved to be difficult to interview Michael Feinstein, songster extraordinaire, because of his hectic timetable. A number of phone appointments were made and then rescheduled. The first time we tried, he was performing at the White House that evening. Later, he was going to be in a different city every day for a week. When we finally connected, even though he had interviews scheduled back to back every 15 minutes or so, he was incredibly fresh and charming. By the time we hung up, I felt like we were friends. This is Michael Feinstein’s true gift.

This is why he is so successful and why audiences love him so much. He connects. Of course, he has prodigious musical gifts, as well being a decent pianist and singer, but he is able to bring the song alive, draw you into the words, and leave you a little better off for having heard it.

On June 8–9, 2012, at the Morton H. Meyerson Symphony Center, Feinstein will join Principal Pops Conductor Marvin Hamlisch and the Dallas Symphony Orchestra in a tribute to the Cole Porter. Feinstein is multi-platinum-selling, five-time Grammy-nominated performer who is dedicated to performing and preserving what he calls The American Songbook, of which Cole Porter has a place of honor.

“Porter’s songs were all written for a show, but they can stand by themselves for the most part,” said the 55-year-old singer and pianist.  “Every once in a while, I feel that one song is so connected to the plot that it requires some brief explanation, but I don’t give a lecture,” Feinstein said in that long-awaited interview. “I do think about the history of the creation of the songs when I prepare to sing them. It gives me a window into how they can be interpreted and what Porter was trying to get across.”

Porter wrote both the words and the music for his songs, so the two elements are intrinsically entwined. His words are frequently compared to W. S. Gilbert (of Gilbert and Sullivan fame), however Porter loved the sexual innuendo. Gilbert was way too proper to write a song called “Let’s Do It,” which set off a craze of writing new, and even more X-rated versions, by everyone from Irving Berlin to Noel Coward. “It was the cleverness of the words and contemporary references that reminds you of Gilbert,” Feinstein clarifies.

Words are important to Feinstein as well. “I always sing the verse of the song, which sets it up. The audience usually doesn’t know it, so when I start the more familiar part, there is usually some scattered applause.”

Sometimes Porter would write the music first and then come up with the words, although occasionally it was the other way around. “I sometimes write that way (music first) myself. You get a feeling or a thought; a melody pops into your head; you put your hands on the keyboard and start fiddling. And there it is: and tune then a song.”

There is a universality, and thus quite a lot of cross over, on Porter songs. Classical artists can easily include one or two in a recital without sounding silly or that they are musically slumming. Recently, Nathan Gunn sang a slightly over-sentimental, but quite lovely, version of “Don’t Fence Me In” for the Cliburn series at Bass Hall.

Feinstein agrees. “Rosalie, the tile song of a 1928 Porter musical, was written for Nelson Eddy, who also sang opera,” he said. “‘In the Still of the Night,’ also written for Eddy, is another song that has a concert feel.”

Penned in 1937, “Night” brings to mind another important aspect of Porter’s life. The song was written with his lover, Ed Tauch, in mind. Porter was a gay man, although he was married, and devoted, to his wife Linda (who died in 1954, ten years before her husband.) By all accounts, this was an arrangement made before they wed, although she became increasingly unhappy as he lived more and more openly.

Practically no one was really out at the time. Some were, like Gertrude Stein, while others, like Noel Coward and Porter himself, were the subject of “everyone knows” winks and nods. “Porter was one of the lucky ones,” said Feinstein, “he could live any way he wanted in a restrictive time. He was very rich, very powerful, very successful. He had the resources to buy his privacy.”

Of course, with today’s voracious appetite for gossip, there wouldn’t be enough money in the world to hush up a life style as flagrantly as Porter’s was. He referred to himself as the Duchess of Peru (after the town in Indiana where he was born).

Feinstein himself, a happily married gay man, appreciates the openness the present climate allows. “Terrence Flannery and I were married in that short window where it was legal in California. Judge Judy performed the ceremony,” he said. “She wanted to do it to show her support for marriage equality.”

This openness translates into every aspect of his life. “When I played at the White House, Terrence went with me and we made the point by our presences as a couple. We even met Justice Alito, with whom we obviously have some differences. We can’t just demonize those who oppose us. Just by being present and a couple, we invalidate their arguments and give them something to think about later.”