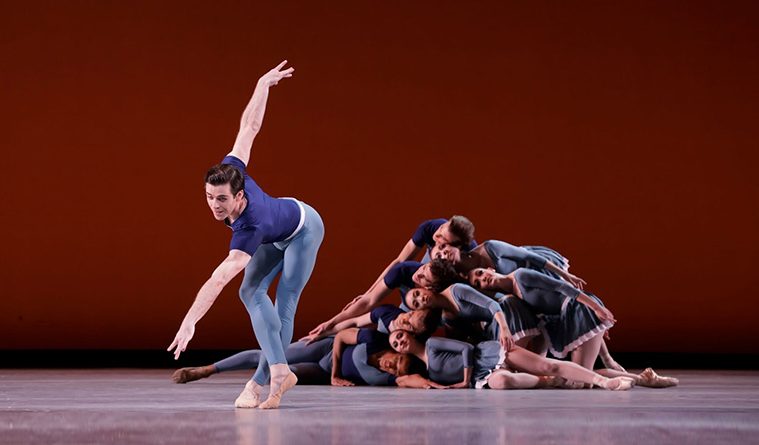 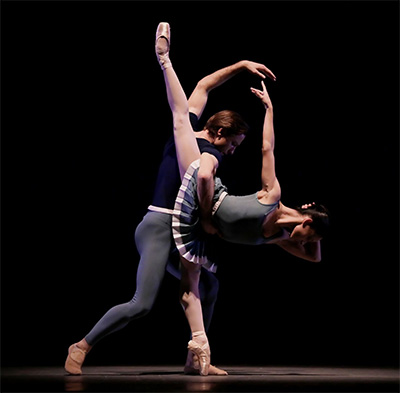 Karina Gonzalez and Ian Casady in in Justin Peck’s Year of the Rabbit. Photo by Amitava Sarkar courtesy of Houston Ballet.

The ballet field is fond of pinning their hopes on the next great choreographer who will lead this astonishing art form into the future. New York City Ballet soloist and Resident Choreographer Justin Peck is clearly in the running. Lucky for Houston fans, we finally got a chance to see what all the fuss has been about when Houston Ballet performed Peck’s breakout ballet, Year of the Rabbit (2012), as part of the mixed repertory, Director’s Choice: Legends and Prodigy, which also included Stepping Stones by Jiří Kylián and Grosse Fuge by Hans van Manen, March 16-26, 2017 at Wortham Center.

Peck’s craftsmanship, innate musicality, and ability to move a group in the most arresting patterns has the ballet worlds attention. “The buzz about his talent has people equating his potential with the likes of Alexei Ratmansky and Christopher Wheeldon,” writes Joseph Carman in Dance Magazine.

Like Balanchine, Peck is a traditionalist at heart in that he’s musically driven, and has great faith in ballet’s versatile vocabulary. Yet, his choreographic voice is completely distinct, and is most recognizable in the way he designs for the corps de ballet. He found that this was a neglected area of choreography. “No one was harnessing the challenge and power of the corps,” says Peck. “I was blown away at Balanchine’s large group works like Symphony in C and Serenade. I would watch them from higher up to observe the architecture of the ballet. I also found a really high level of talent in the corps at New York City Ballet.”

Since Year of the Rabbit, Peck has created seven works thus far for New York City Ballet. In addition, he has set or created new work for such companies as Miami City Ballet, Pacific Northwest Ballet, L.A. Dance Project, the New York Choreographic Institute, the School of American Ballet, the Nantucket Atheneum Dance Festival, New York City Center’s Fall for Dance Festival, San Francisco Ballet and Paris Opéra Ballet. At 29, he has over 30 ballets to his credit.

Peck’s riveting work placed him squarely on the international dance map, but the film Ballet 442, which follows the choreographer as he creates Paz de La Jolla, the 442nd  work for City Ballet, introduced the young choreographer to a much larger audience. The film project started out as a short, and then evolved into a full-length documentary with national distribution, and is now available on Netflix and iTunes. “It’s crazy,” says Peck, of the film’s amazing trajectory. “I am so proud of the film. It really shows all that goes into making a ballet. I was just getting started then, learning as I go.”

Houston Ballet’s athletic dancers can’t wait to sink their teeth into Peck’s sweeping movement. And the feeling is mutual. “I was so taken by the abundance of talent at Houston Ballet when I visited recently,” Peck exudes. “It was so eye opening. They are such hard working dancers. I left charged and inspired to be working with them.”

Now that Peck is setting his work on multiple world-class companies, he’s learning to be a quick study in casting his ballets. “I like to talk with them and get a sense of their personalities. It makes my work easier,” he says.

Indie singer/songwriter Sufjan Stevens’ electronic zodiac-inspired song cycle, Enjoy Your Rabbit, arranged for string orchestra by Michael P. Atkinson, formed the structure and shape of Year of the Rabbit. “It’s such an expressive piece,” says Peck. “Sufjan has such an unorthodox way of creating percussive sounds, and there’s melody and challenging time signatures. It’s super mathematical, which is how my brain works. We toyed around with the instrumentation and settled on a 34 string orchestra. It’s a heavenly sound.” Stevens was a newbie to ballet, but once he got a taste of the process he was in, and is now quite the ballet fan. “We are on our 4th work together,” claims Peck.

Although Peck’s ballet is an abstract work that does not rely on story for its structure, a sense of community and the interrelationships among the dancers is in full evidence. Peck reveals the circular flow of life with figures coming and going in intricate patterns that suggest games, rituals and connections.

Peck finds the fact that he’s still dancing a plus in the studio. “It works well to express the physicality of the movement,” he says. “The best way to communicate is by watching and trying to replicate it. I like to be up on my feet and dancing with them.”

Navigating dancing while choreographing hasn’t been easy for the in-demand choreographer. Recently, he danced in his own work, The Times are Racing. “It was a great chance to kill two birds with one stone to dance in my own piece. I had never done that before,” says Peck. “It is challenging to find a way to do both, but Peter Martins has been so supportive and encouraging.”

As for the future, Peck has no shortage of new projects in the works. For someone who has experienced such a stunning success as a young artist, Peck remains gracious and humbled by the opportunities that have come his way. “I am lucky to have New York City Ballet as my platform, as a place to explore, collaborate and grow,” says Peck. “The goal is not to repeat myself, not to fall into a rut. I want to make sure that I am discovering new territory and new music. I want to keep my perspective fresh and inspiring.”