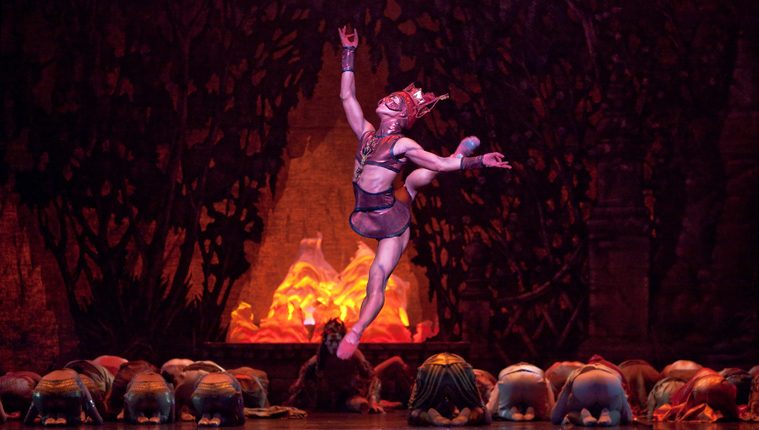 La Bayadère, recreated for Houston Ballet’s 40th anniversary, allowed artistic director Stanton Welch to do what he does best, looking back and forward, all within one beloved ballet. After re-creating Swan Lake in 2006, another 19th century classic, Welch was ready for the challenge.

La Bayadère is one of those behemoth ballets that contains just about everything that can fit into a story ballet, a love triangle, angry gods, deadly snakes and an iconic Ballet Blanc (white ballet), called “The Kingdom of the Shades.” Ballet Blanc, characterized by the use of white tutus, represents the pinnacle of 19th century romantic ballet.The story of  Nikiya, the bayadère (temple dancer), Solor, killer of a ferocious Bengal tiger, and Gamzatti, the temptress and Rajah’s daughter, is not only one of ballet’s most treasured love stories, but a company milestone.

“We like to dive into difficult ballets, that’s what is unique about our company,” says Welch. “We are adventurers.”  You know that a company has fully arrived when they can perform La Bayadère.” As for bringing this tour de force back, Welch had his reasons. “We want to revisit a ballet while it’s still fresh,” he adds.

La Bayadère premiered in 1877 at the Imperial Ballet at the Bolshi Kamenny in St. Petersburg, Russia with choreography by Marius Petipa. The ballet came about during the height of the orientalism fad.Remember, this was before the travel channel, and art played a role in imparting information and mythology about other locales in the world. The orient had a particular lure for the performing arts.  Verdi’s opera Aida had just premiered, and exotic locales where all the rage. Ballet needed to jump on the “faraway” bandwagon.

The ballet’s journey to the West took considerable time. The Shades section was performed by the Leningrad Kirov Ballet in 1961, followed by Rudolf Nureyev’s version for The Royal Ballet in 1963. Shades arrived on American shores, staged by Natalia Makarova for American Ballet Theatre (ABT), in 1974, but it took until 1980 for Americans to see the complete ballet, when Makarova staged it for ABT.

Welch’s approach to giving the old a new spin required some serious rethinking, mixing tradition and fresh material. “Solar and Gazmatti’s variations, and the entire Shades remained the same, while everything else is new,” he says. “I really enjoyed choreographing to Minkus’s music.

Since Welch is blessed with a troupe of strong actor/dancers, the ballet offered another opportunity to show off the company’s drama chops.  “It was really fun working with such an exaggerated acting style. This ballet is like a silent movie. It’s operatic and Bollywood. Its charm is that it doesn’t tear your soul out. Think summer blockbuster.”

Welch appreciates the great tradition of this classical ballet, but he’s not apologetic about freshening up the narrative for modern audiences. He aimed to keep the beauty and history of the ballet’s tradition intact, while speeding up the story.

The thin plot lines have been a bone of contention for critics.  “There was simply too much left unexplained,” insists Welch. He brought the characters more into focus, with more believable motivations for action. The traditional mime sections have also been reconfigured and integrated into the fabric of the narrative and choreography. “We can’t stop dancing in order to mime; it has to move the story forward,” insists Welch.

“I actually made the story more complex,” he says. “Solar felt too weak to me, so now he’s more resilient. Gamzatti needed to be more evil, and Nikiya more tragic.”

The famous Shades scene, which remained completely intact choreographically, posed different challenges. “I kept Shades as authentic as possible,” says Welch. He researched every version he could find from the 1940s onward.  (The company performed the Shades scene as an excerpt in 1994 and 1998.)

Solar takes a puff of the hookah and off he goes to dream land. Framed as a hallucination, Shades requires absolute precision for the 24 female dancers who perform elegant arabesques while descending a ramp. They truly move as one enchanted entity. Every detail, from the use of the breath to the placidity of the face, must be addressed.  The rocking sensation created by the arabesque combination mesmerizes from the very first step on stage.

“It has to be perfect,” says ballet mistress Louise Lester. “It’s an immensely satisfying experience for a corps de ballet. They are all principal dancers for me at that moment. The dancers need to portray calmness and tranquility; they have to take us to this other world. It’s always hardest for the first girl; she has to do 64 consecutive arabesques.”

Peter Farmer’s hand-painted sets and elaborate costumes transport the audience to this imaginary India. With 121 costumes, comprised of 568 items, one might surmise this is a large undertaking. Farmer has created eight full-length productions for Houston Ballet so far. “Peter’s work is like a Monet or Renoir. Like a watercolor painting, he captures the romanticism of this world, which is really a dream state,” says Welch. “These are spectacular paintings, really breathtakingly beautiful.”

Don’t expect Gamzatti to show up wearing a tutu, as she might in older versions. Welch makes a clear delineation between the real and the dream worlds. “No human wears a tutu in my ballet,” quips Welch. “This is a land of spirits.” Instead, we see exotic harem costumes for Nikiya and Gamzatti, while only the Shades don classical white, pearl-encrusted tutus.

La Bayadère is a rite of passage for dancers, a chance to engage in their rich lineage and be a part of it in the present. “They get to explore perfection,” muses Welch. “They may never achieve it, but it’s both an interesting and fulfilling endeavor.

With only a handful of companies in the world that can take on La Bayadère, Houston Ballet is in a special position. “With the size and grandeur of this ballet, we get to say, ‘Hey, look at us,’” says Welch. “We get to flex our muscles.”

Reprinted by permission of Playbill magazine.