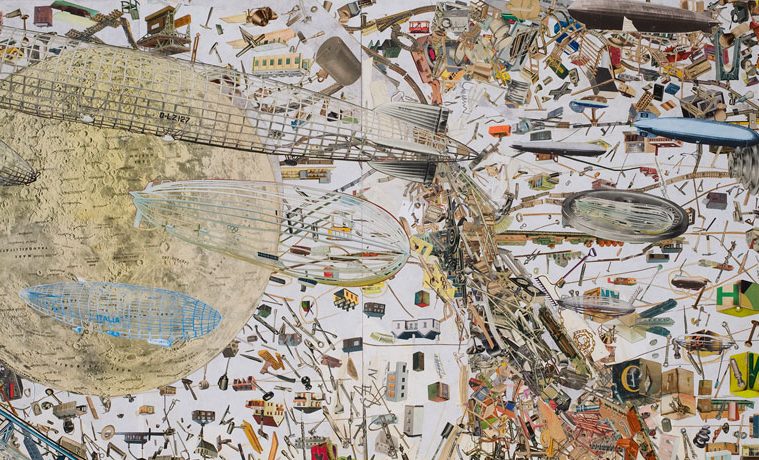 DALLAS—For the first time in its history, Conduit Gallery has devoted its entire space —two large rooms and a small project gallery — to the work of a single artist.  Lance Letscher has outdone himself, advancing his collage aesthetic into 44 multilayered works of art executed on books, Masonite, and found objects,  all made in 2013.  What was driven by pattern and abstraction in his earlier body of work has given way to a deep meditation on media, technology, advertising, and transportation, which may spring from a central notion related to the flow of information in all its forms.

The title of the show, Pregunta Numero Uno (Question Number One), suggests a new beginning for Letscher’s work and his way of thinking about what collage is and how it remains perhaps even more relevant now than when it was invented in 1912. Collage methodology has since become an editing language that includes digital information in cinema or web design right down to the cut-and-paste features in every computer, tablet, or cellphone. By arranging visual elements and images into new configurations, Letscher re-contextualizes the information found in our media-saturated world.

Letscher’s particular working method is known as photomontage, a derivation of collage using newspaper and magazine cutouts arranged in such a way as to raise critical awareness in the viewer. The German artist Hannah Hoch was an early pioneer of photomontage in works such as Cut With the Kitchen Knife Dada through the last Weimar beer-belly cultural epoch of Germany (1919).

Letscher’s large-scale work Secret Refueling Station #2 suggests an instructive comparison to Hoch’s famous piece. Letcher’s image teams with objects in motion, evoking transportation by including zeppelins and trains along with wooden blocks, houses, tires, and cogs, over an image in the upper left of a planet, perhaps the moon.

The colorful pieces of the puzzle circulate around centrifugal energy points like in Hoch’s masterpiece but without the ideology of Berlin Dada or political commentary.  Beyond the frenzied and energetic references to information and objects, Letscher communicates his message about the ephemeral aspects of contemporary society by rendering machines as they decay and possibly reform through the ever-present entropy of data-like building blocks.  This gives his work a psychological aspect bordering on dreamlike imagery that fades in and out of collective memory.

Letscher’s work is not limited to a mere rearrangement of cut-out images. When it suits him he draws or colors his lines and forms on paper and then cuts them out as needed.  This constant investigation of materials lends his work a depth that early photomontage lacked.

For instance, in the centerpiece of the show, Hot Rod 1, he installed a full size glider plane fuselage with wings cut down from a fifty-foot span so that it would fit in the central gallery space.  The plane is covered with pasted images and text some similar to other small pieces on an adjacent wall.

Letscher’s design outline came from a German WWII plane from which he borrows the structural components, as his interest lies in the idea and the form but not the original trappings and insignia.  The subject still clings to aviation, flight, and the flow of information in an art installation that deflates the military by laying on new meanings.

With Hot Rod 1 in the main gallery and a full-scale motorcycle, Cagiva, collaged and displayed in the center of the entrance gallery, Letscher leads the viewer into a way of reading the entire show.  The exhibition’s layout suggests a relationship between the sculptures and the surrounding two-dimensional pieces.

Additionally, a type of nostalgia akin to “hitting the open road” or “flying the friendly skies” as well as the vintage-magazine quality of some of the cutout imagery tie the works together and suggest a retrieval of the past reformulated into a contemporary aesthetics cleverly dealing with the present.

After the image overload of the two main galleries, Letscher ends the show on a tranquil and calming note with a small-scale installation in the project room.  In the center of the intimate and dimly lit space sits Composition for Piano & Horn, a found object assembly featuring a miniature beige Schoenhut piano with a pocket trumpet sitting on the top left.  In place of the sheet music, a strip of cutout musical notes lie inside the string compartment along with what appears to be a technical rendering of the design of the trumpet valves.

Letscher seems to suggest that if the piano played, one would hear the music of images and artistic design.  Perhaps set up as a musical finale, this final artwork changes the theme and frame of reference from the visual to the aural in that sound waves are also a form of energy and information.  Collage pioneers would be proud.