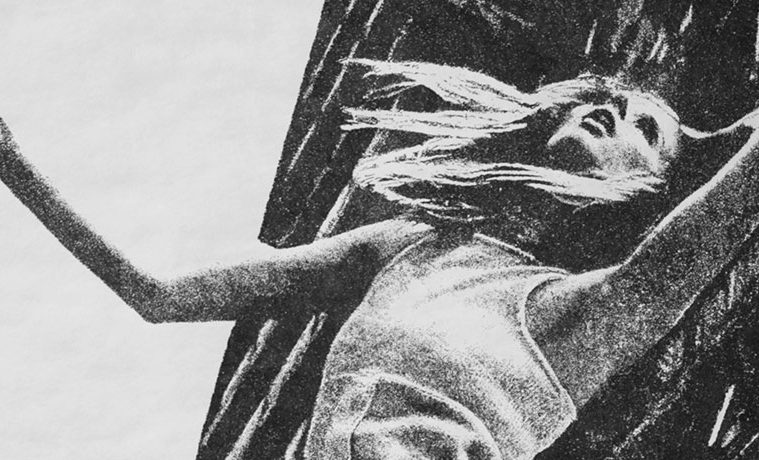 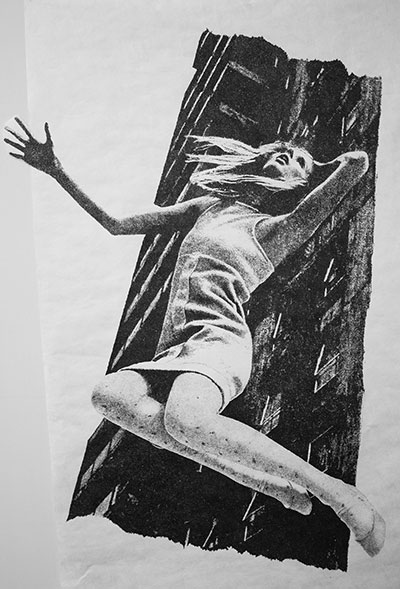 Laura Lark is a subversive painter in both form and content. She discards the rigid lines normally associated with drawing in favor of grouping and layering small dots of black Sharpie ink on a white background, a contemporary adaptation of the painting technique known as pointillism. Through this process, she painstakingly recreates images of women she finds in fashion magazines from the 1970s: not ironically, I would argue, women who resemble Lark herself.

Arena, one of the process drawings on view in her current exhibition Night Gallery, nearly steals the show with its James Bond-esque black-and-white sensual style, heavy visual tones, and intrigue. A youngish, beautiful woman sits at a gambling table; a man stands in the background. She twists her head toward the viewer but looks down, keeping a watchful eye on the other hands. Her face is partially cloaked in the shadow of what we assume to be shiny blonde hair.

A few anxious moments emerge with Nettle, the torso of a stiff, unidentified adorned pageant winner or bride; Drop, a women trying to save face while in a dangerous free fall against a partial skyscraper backdrop; and Clarissa, who jumps and flips her hair spastically.

As You Were is a departure from the rest of the exhibition in terms of material and application. Here, Lark embraces conventional painting and recreates what some viewers might recognize to be a photo of herself. And yet, in classic Lark fashion, she laughs in the face of what is expected and instead applies swipes of metallic gold and dark paint where her head should be. Maybe she gave up on rendering her own likeness correctly, or maybe she deliberately obscured it. Whatever the case, the result is another layer of self-reflection and unfulfilled desire for seeing the truth and the lies behind and within a reproduced image. 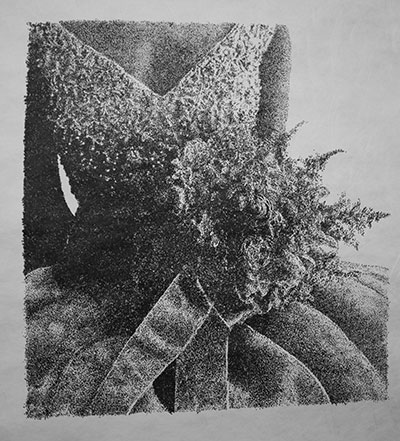 The exhibition title mirrors Rod Serling’s 1970s macabre television series Night Gallery, less well-known than The Twilight Zone. Lark’s use of the title is an important detail, one that hints at a complex history of women considered or viewed as the lesser sex. Further, through her use of black ink—her only painting material—she transfers great visual power to what is otherwise assumed to be vapid: negative space.

Lark creates these works at a time when identity—and, not surprisingly, an artist’s identity—is drowning in self-reflexivity, for better or worse. (If you’ve seen Hollywood actor James Franco’s selfies re-enacting Cindy Sherman’s Untitled Film Stills, you’ll know what I mean.) But the gaze in Night Gallery isn’t art history’s male gaze; instead Daisy (.) and Daisy (,) are female eyes, disembodied.

For me, Daisy (,) summarizes the spirit of Night Gallery as a whole. The piece includes the detail of a fingernail (most likely a Lee Press-On) positioned just under the lower lashes. Whether Lark is referencing something banal in this piece, like gently applying makeup to sensitive under-the-eye skin, or implying something more sinister, such as poking out the very thing that seems to give her joy, remains exquisitely unclear.