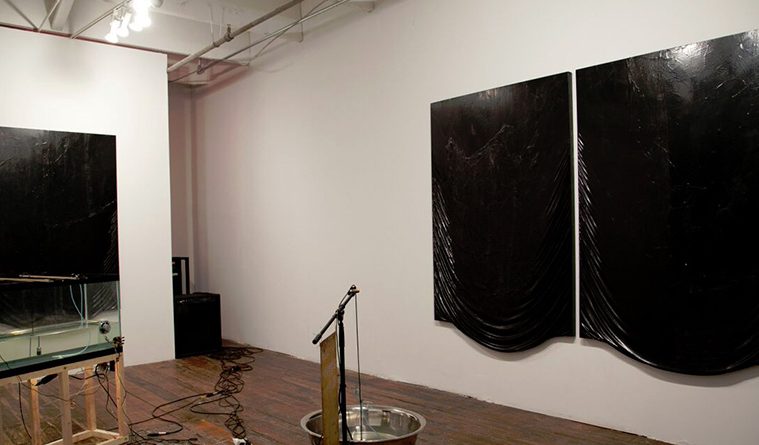 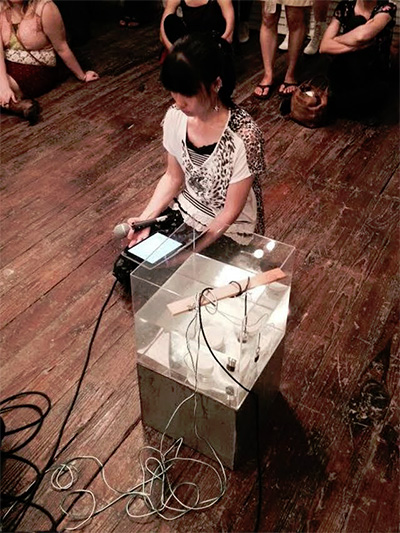 Paul Middendorf, galleryHomeland and the future of the Houston arts scene

Black matter dripping from canvas, flanking a fish tank and bowl filled with water, microphones, and other objects: this is galleryHomeland’s Kokomo, a recent show featuring work by artists Greg Ruppe and Jeff Gibbons. The artists, in the words of arts writer Lucia Simek, “build upon the manifold architecture of isolation and artifice that they have sustained throughout their collaboration” to create “an elaborate sound sculpture” that explores containment and the imaginary within the framework of contemporary life. The site-specific installation was the third and final component of a multi-site collaboration Gibbons and Ruppe completed this year, and included a performance that took place during the opening reception in which visitors played elements of the sound sculpture.

It is exhibitions like this one, featuring site-specific and experimental work, which differentiate the non-profit Houston art space, galleryHomeland, from others. The gallery is one of two spaces under the galleryHomeland moniker, the other is located in Portland, Oregon and the non-profit will be celebrating its tenth anniversary this July. Paul Middendorf, founder and Executive Director of galleryHomeland, came to Houston in 2010 as a judge for the Lawndale Art Center’s Big Show and in 2011 curated Southern/Pacific, “a three-part, three-city exhibition, [bringing] together work by artists from Houston, Marfa and Portland,” which also took place at Lawndale. The following year, building on his experiences in Houston and the success of a pop-up, satellite space opened in Berlin in 2009, Middendorf’s galleryHomeland joined the ranks of Houston’s burgeoning cluster of alternative art spaces. 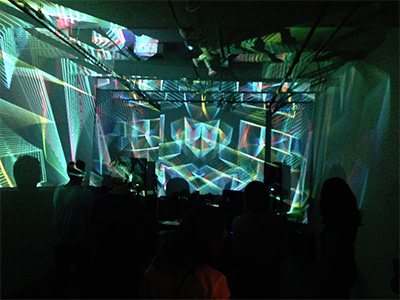 Situated in the East End, the space, which moved to Commerce Street last September, facilitates a number of activities including an artist residency, a lecture series, creative music events, and new media screenings, in addition to collaborations with other non-profit arts spaces. Middendorf explains that Houston’s collaborative aspect is what has made the move to the city the most rewarding, noting an upcoming collaboration with Art League Houston as an example.

“I can see the wheels turning to find more creative ways to keep things local but also extend nationally and internationally,” he explained. Indeed, Houston’s creative landscape has been transforming for years and there’s a need for art spaces to reassess their roles within this shifting terrain. When asked about his view of galleryHomeland in this regard, Middendorf explained that he tries “to stay involved in all conversations civic arts leaders are having about the community. I’m focused on helping Houston become the best art city it can be,” and it is through this experimental space that he hopes to facilitate Houston’s growing artistic reputation. Since the Houston space opened its doors in 2012, the space has organized for six artists to come to Houston through its residency program, providing materials, resources and a modest stipend. The residencies are open, cater to emerging and mid-career artists, focus on site-specific inquiry and usually last for four weeks. One of Middendorf’s goals for the future is to expand the residency program to provide better financial and accommodation support for artists in order to broaden the possibilities for the work they produce. 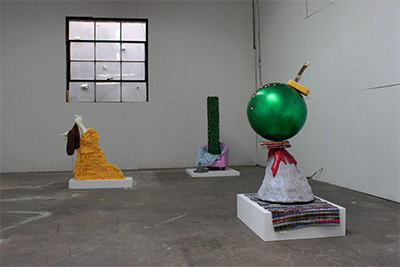 Beyond the aforementioned programs, the non-profit also hosts Homeland Soup, the Houston equivalent of the international micro-grant program which functions like a reasonably priced and low-key gala—participants pay $5-$10 for a bowl of soup, artists present projects to them for which they are requesting funding, and guests then vote for their favorite project. All proceeds go to the winning artist as an unrestricted grant.

While other Houston arts organizations have organized one-off Sunday Soup events such as the Blaffer Museum, Homeland is currently the only relatively consistent organizer of the event. In the current climate, with funding opportunities scarce for artists, it’s certainly an appreciated effort. Not only does it provide alternative funding opportunities outside of the two primary options available through HAA and Idea Fund, it also provides exposure. Middendorf explains, for example, that at the last Homeland Soup event, some artists who weren’t selected for the grant were still approached by attendees to help them complete their projects. The event in January of this year, conducted in collaboration with Art League Houston’s Visual Arts Director Jennie Ash and artist Carrie Schneider’s charge practicum grant, raised over $2,500 in grant money for artists.

This year will see a shift in galleryHomeland’s operations, as the non-profit will be closing its Portland space and focusing on Houston as its headquarters. After 10 years of steady growth, Middendorf hopes to not only sustain the organization but continue to expand it by growing its exhibition space perhaps eventually, securing a larger annex of buildings to provide more opportunities for performance based work.