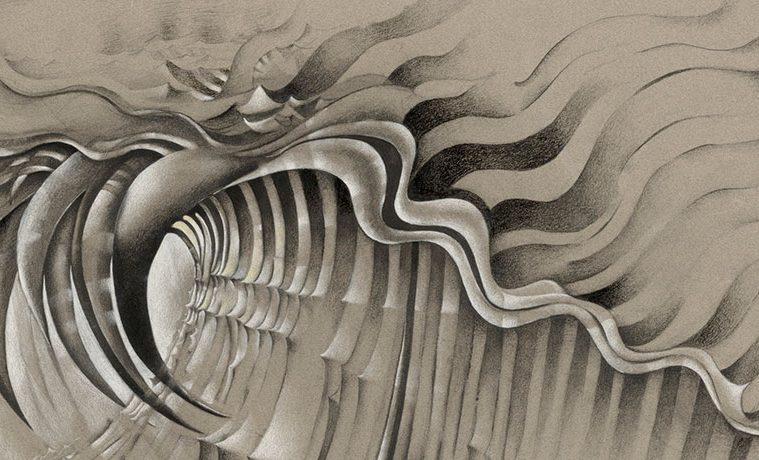 Lee Bontecou: Drawn Worlds is a remarkable exhibition of mostly drawings by an artist whose name was once as familiar as Helen Frankenthaler and Jasper Johns.  Organized by Menil Collection curator Michelle White, sales the traveling showfeatures nearly 80 works that at times are startling in their ability to both mesmerize and unnerve the viewer.

Take, hospital for example, a 1958 drawing executed with a welding torch and soot on paper. Untitled like most of Bontecou’s work, it depicts what looks like a cloud of grasshoppers, tangled in weeds, struck dead from an aerial pesticide dusting. One cannot help but think of Hiroshima and Nagasaki.

Born in 1931, Bontecou’s creative outputhas not only been informed by World War II, but by other wars that followed; the exploration of space;and the disastrous effects of “better living through chemistry” upon plant and animal life. 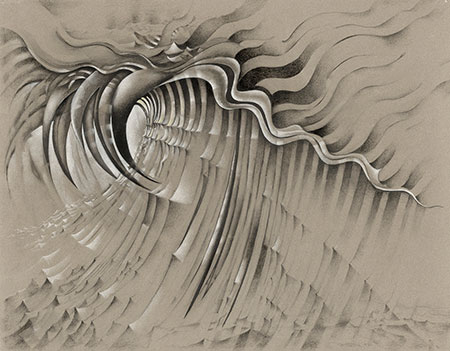 In 1959 Bontecou became one of the few female artistsin Leo Castelli’s stable. Slight in person, she held her own among its other heavyweights (Rauschenberg, Chamberlain, Judd, et al),as her works were by any argument, equal to theirs on any terms.  Soon she was included in major museum shows and biennials, and featured in magazines like the very popular Look and Art in America. More importantly, Bontecou’s work wasgreatly admired and appreciated by her peers.  Joseph Cornell corresponded with her, and kept a file on her work; Donald Judd described “the quality of [her] reliefs [as] exceptionally singular.”

By the 1970’s and 80’s Bontecou was spendingless time in New York, eventually moving with her family to rural Pennsylvania.  Here, in near anonymity, she continued to create and grow as an artist. Refusing most offers to exhibit, she stayed out of the limelight to the extent that a reasonably informed individualmightbe forgiven for mistakingthe Museum of Fine Arts, Houston’s 1962 Bontecou sculpture—which the MFAH has put on view in conjunction with the Menil show—for a more disturbing, less colorful Frank Stella.

Since 2003,Bontecou’s reluctance to show has abated somewhat, allowing for more institutions and audiences to rediscover this exceptional artist’s work.  Whereas many of the recent exhibits focus on her sculpturesand 2D works as they relate to one another, Lee Bontecou: Drawn Worlds, concentrates almost solely on drawings created to be“independent works of art.”

Aseries of four beautiful, small drawings from 1963 remind me of a Cold War architect’s experimental renderings for multi-family housing on Mars, in the event of Earth’s total nuclear annihilation.

A larger piece from 1998, created on black paper in pastel and colored pencil, appears from a distance to be a perfectly innocuous underwater garden.  Like many of Bontecou’s drawings, it is mesmerizing in its use of black. As it draws you in, you realize there is no escape. The sea creatures and plants are well armed, their human-like teeth sharpened, their tendrils coiling toward you, replete with thorny barbs.

Lee Bontecou: Drawn Worlds
The Menil Collection
Through May 11