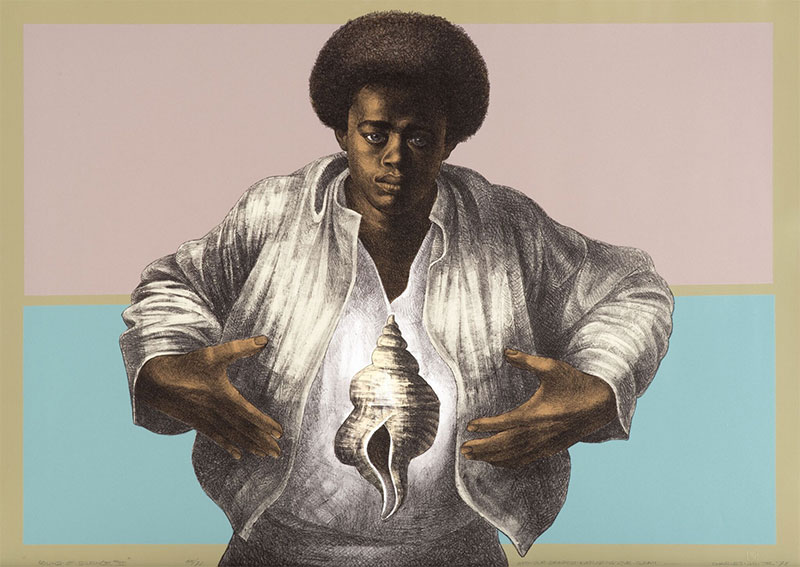 Charles White, Sound of Silence II, 1978, color lithograph, 25 x 35 1/4 in., Gift of Susan G. and Edmund W. Gordon to the units of Black Studies and the Blanton Museum of Art at The University of Texas at Austin, 2014 © The Charles White Archives.

In the fall of 2017 at the Museum of Modern Art in New York, artist David Hammons curated an exhibition called Charles White—Leonardo da Vinci. In it, he placed only two works: he installed White’s drawing Black Pope (Sandwich Board Man) from 1973 on one wall and, directly opposite, an untitled brush and ink drawing by da Vinci from the British Royal Collection. “In typical Hammons style, it was kind of like a mic-drop,” says Cherise Smith, Chair of the African & African Diaspora Studies Department at UT-Austin and founding Executive Director of the Art Galleries at Black Studies.

The gesture was a forceful reminder of the remarkable skill with which White rendered the human figure. His extraordinary talent as a draftsman and graphic artist were internationally known during his lifetime, even if his work was rarely shown in the decades after his death. In 2018, the Art Institute of Chicago opened a traveling retrospective of White’s work, which then appeared at MoMA and LACMA; the exhibition marked the centennial of his birth and signaled institutional recognition of his singular importance for American art.

Alongside this national resurgence, Smith led UT’s effort to secure a large-scale donation of White’s work from the collection of Drs. Susan G. and Edmund W. Gordon of Pomona, New York. The works will be on view in two exhibitions at UT this fall: Charles White and the Legacy of the Figure: Celebrating the Gordon Gift at the Christian-Green Gallery (Aug. 28–Nov. 30) and Charles White: Celebrating the Gordon Gift at the Blanton Museum (Sept. 7 – Dec. 1).

Raised on the South Side of Chicago, White (1918-1979) was one of the most celebrated and influential draftsmen of the 20th century. After graduating from the School of the Art Institute of Chicago in 1938, he began working as a painter and muralist for the Works Progress Administration. His work coincides with the high point of American regionalism, in which artists were considering the struggles of U.S.-American peoples, emphasizing everyday experience and the figure.

With artist Elizabeth Catlett, White moved to New Orleans and then New York, joining communities of artists in both cities, and finding shared political causes with other left-leaning artists and activists. White’s work shifted toward social realism. “Social realists are interested in depicting, in a realistic way, the downtrodden, to advocate for their equity and social mobility,” Smith says.

White and Catlett traveled to Mexico, staying at the home of muralist David Alfaro Siqueiros, meeting other muralists, and visiting the Taller de Gráfica Popular. “There, they saw this amazing use of monumental figures that the muralists were doing, and it’s really the foundation for White … he begins to use the black body as his subject matter to advocate for the rights of black people, showing their humanness, their realness,” Smith says.

In 1950, White married social worker Frances Barrett and they eventually moved to Los Angeles, where he began teaching at Otis Art Institute in 1965. His students included Kerry James Marshall and Hammons, among many others, and his influence as a teacher spread expansively across the country.

While the Whites had no roots in Texas, they were close family friends of Drs. Ed and Susan Gordon, the parents of Ted Gordon who is the founding (former) chair of the African and African Diaspora Studies Department at UT. Knowing Gordon’s important legacy for the university, Smith approached the family several years ago, curious about what their collection included. She was stunned.

“It was a house full of Charles White, several large-scale drawings of the kind a major museum might only have one or two of,” she said. With Ted Gordon’s blessing, Smith and former UT President Bill Powers visited the family. Their conversations eventually led to several significant institutional commitments, not only to the art collection, but to the legacy of the Gordon family. “It was a big catalyst to get a number of things accomplished across the institution,” Smith says. Noting the excellent collections held at UT in the Harry Ransom Center, the Benson, the Briscoe, and the Blanton, she also observes significant absence: These collections “do not adequately reflect the population of the state and the country. Bringing the White materials to UT has more effectively integrated and diversified the art and material collections on campus.”

“The Gordons were really happy with how UT fostered that growth that their son was able to make happen here,” Smith says. She presented the donation to the family as the anchor for an African American collection of national significance, sure that other donations will follow such a major acquisition. Supportive of the idea, Dr. Ed Gordon saw room for the idea to grow. “He said all this sounds great—but I also want to donate my papers to the university’s black diaspora archives that you are trying to build,” Smith says. These exchanges led to the hiring of an archivist and a collections budget for the black diaspora archives at the Benson Library, as well as support for the completion of the Christian-Green Gallery in the Black and Latino Studies building, named to commemorate the friendship between the Gordon and White families. Smith credits support from Powers, from the school’s dean, and from the provost, for negotiating such a coup.

The Gordons and Whites met in the 1940s at a family camp. Both were interracial families at mid-century, and they shared a realization of how American racial politics antagonized their shared communities. “They were similarly conditioned to be both insiders and outsiders at the same time,” Smith says. “They had political beliefs in common. All of them were interested in social equity for black people, for poor people, and for children… They collaborated with each other in a whole host of ways.”

“Ed Gordon says that Charles White was the more politically active of the two of them, and he was more in the trenches, even though they had the same set of politics,” Smith says. “They have so many research interests in common—they would write to each other about ideas… They’re also engaged with a larger network of leftist oriented and leftist activated people of color.”

Curator Veronica Roberts at the Blanton is editing a publication corresponding to the gift, which will significantly expand the available scholarship about White. With in-depth scholarly essays about each work, the book also includes an interview between Ed Gordon and Smith, and a series of first person accounts from White’s friends. “These are incredible tributes,” Roberts says. “It makes clear the depth of his connections and friendships, how he was on the frontlines of feminism and civil rights, and what an influential educator he was.”

The exhibition at the Blanton, Roberts adds, highlights White’s legacy as an educator, and considers the span of his transnational relationships and friendships during his lifetime. “It really spans his practice, beyond the walls of the institution,” she says. Including ephemera, album cover sleeves, and journal covers, the exhibition also considers how “mass produced, widely circulated materials, made White’s work available to wider sectors of the black community, where his art wasn’t always displayed. He was so mindful of accessibility. He wanted this work to circulate way beyond museums, into peoples’ homes,” Roberts says.

Phillip Townsend, the Drs. Susan G. and Edmund W. Gordon Fellow in African American Art at the Blanton, notes the significance of White’s images of heroic and dignified black and brown people. “In some instances, White is viewed as a somewhat radical artist because he … honed in on figuration and stayed on that wheel. But also, he was interested in democratizing art. His resurgence right now has to do with the rise of Black Lives Matter and other black liberation movements,” Townsend says. “These communities of color and other communities on the margins are thinking about representation and the way that images need to show dignity and respect and empowerment … This is the work that his work does now, and it is also what it did in its contemporary moment.”

At the Christian-Green Gallery, the exhibition considers what White’s insistence upon figuration means, connecting it to how younger generations of artists are currently using the figure. Smith sees the legacy of White’s figuration in work by Kehinde Wiley, Kerry James Marshall, Kara Walker, Deborah Roberts, Robert Pruitt, and Vincent Valdez. “There is a whole host of ways to think about White, but my interest has been in the resurgence of figuration in contemporary art,” she says. “My question at the root of this show is why do artists of color focus on brown bodies—what work does that do.”

Describing White’s sphere of influence, Townsend connects him to peers across various communities. It’s important to note “he wasn’t only an artist for black people—though he created images mostly of black people—the messages he created in his work were universal.”

“Given that we are in a landscape in the states where the humanity of people of color is being questioned all the time, having artists focus on portraying people of color in both heroic, idealized, and realistic ways can only reinforce their humanity and our humanity,” Smith says. “And, the work is just amazingly beautiful. It is a marvel to look at.”