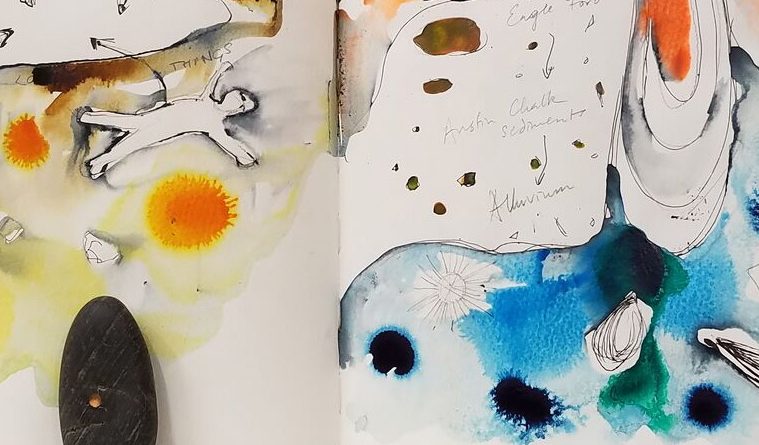 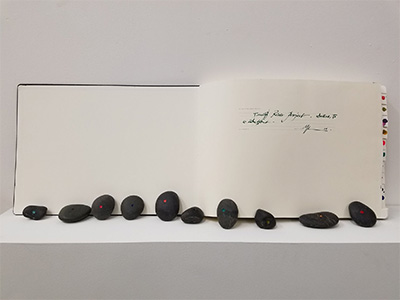 Dallas has a complicated relationship with its river. At various points in a century and a half of more or less official existence we’ve tried to transform the Trinity into an inland port, we’ve pretended it didn’t exist, and we’ve literally moved it, and now people and organizations, both public and private, are attempting to reclaim it.

If you were unaware that Dallas had a river before reading that paragraph, you’re not alone. But Dallas does have a river—a thriving river, actually; and its history, like much of Dallas history, is little known, under-appreciated, and complicated.

So it’s more than fitting that artists would tackle the subject, chronicling and addressing the history in an attempt to raise consciousness, start a conversation, and assert the role of art as advocacy.

Having seen LA-based artist Marcos Lutyens work at Documenta several years ago, Dallas-based gallerist Liliana Bloch kept in touch with Lutyens, whose practice centers on “the use of hypnosis to engage the visitor’s embodied experience of art.” Lutyens, whose international résumé includes exhibitions with the Los Angeles County Museum of Art, the Centre Georges Pompidou, the Royal Academy, and many more, uses his art to explore consciousness in many ways, but most specifically its relation to how we experience art.

Laray Polk is a Dallas-based artist and writer whom Liliana Bloch also represents and earlier this year she introduced Polk and Lutyens, advising them that if their conversation turned towards a project, she was happy to help facilitate.

Several months later, the Trinity River Project was born, the final phase of which will be on view at the Liliana Bloch Gallery in Dallas through Dec. 30.

The first phase of the project consisted of a series of ten essays that Polk meticulously researched and authored concerning the history (mostly underrepresented) of the Trinity River in Dallas. D Magazine published the essays over the course of ten days on its website, ensuring that the content would reach a broad audience throughout the city— more than are typically exposed to “art.” The essays covered everything from the politics of cemeteries to the history of waste disposal to the fossils researchers and random pedestrians have found on the river over the last century. While easy to read and very informative, Polk used her writing as a warning: “How we treat the bones of the city,” she writes in an essay on what happens when historical artifacts are found on public property, “can tell us a great deal about where we’re headed.” The essays, although filled with tales of human oversight and the accidental consequences of the inexorable march of progress, strike a note of hope; if you’re reading these essays, she seems to imply, there’s still hope. 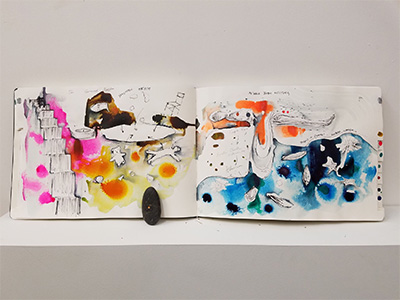 During the second phase of the project, Lutyens flew to Dallas to conduct a series of three guided meditations along the Trinity River. If Polk’s essays illustrate our intellectual relationship with nature, Lutyens work attempts to re-connect humans with nature on the spiritual or psychological level by inviting them to lose themselves in it.

The final phase of the installation is an exhibition at the Liliana Bloch Gallery which functions more or less as an archive of what came before; the show consists of Polk’s essays, objects found in and around the Trinity River, recorded meditations visitors can participate in on their own, and a series of ten paintings Lutyens has created in response to Polk’s writing.

What do we lose in the name of progress? Whose responsibility is it to preserve history? Who can have access to that history? And how little do we really know about it? These are just a few of the questions Polk’s writing raises, while Lutyen’s work counters her tireless research with an answer: be still.

Drawing on their two artistic practices, Lutyens and Polk approach exhibition-making in an entirely new way, and while their divergent practices can occasionally seem to stand in opposition to each other, the Trinity River Project proves you can’t really have one without the other; the context of Polk’s rigorous story-telling, set the stage for Lutyen’s quiet meditations and created the subject matter for his paintings.

“Maybe it’s just part of human nature, but we tend to not take seriously the things that aren’t majestic,” Bloch says when asked about the impact of the show. And that’s what artists do so well in the 21st century: Draw attention to what we tend to take for granted, the little things that tend to be overlooked, and the forgotten histories.

The Trinity River Project is inherently political (as we know everything to be in the 21st Century) but it doesn’t feel like it. Apart from the gallery setting, the whole thing feels very organic, like knowing Polk’s history and participating in Lutyen’s meditations are what we’ve always been doing.