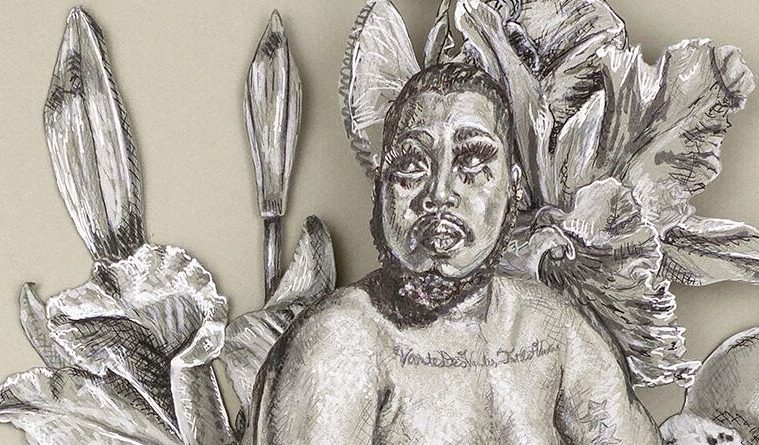 Let Your Flowers Grow: Anthony Sonnenberg in Bloom at Conduit 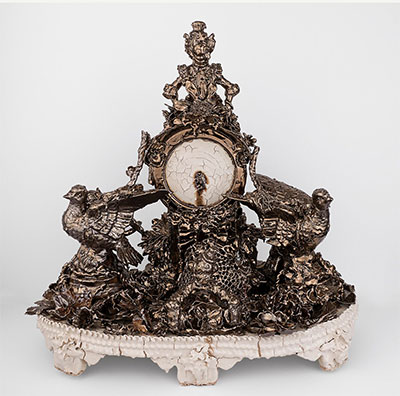 About a year and a half ago, I spoke to Anthony Sonnenberg for Arts + Culture.   He was in the midst of a residency at Houston’s Lawndale Art Center, preparing for a whirlwind of exhibitions. What I was most curious about that time (in advance of his upcoming solo at Conduit Gallery in Dallas) was whether he’d taken some time to stop and smell the proverbial roses. That he was practically mid-sentence when I visited him in his Third Ward apartment, where he was busy staging work and applying final touches, quickly made me feel the irrelevance of this question. Sonnenberg is one of those artists who thrives on perpetual motion. “I’m pretty typically German,” he laughs. “All the males in my family are constantly working ourselves to death.”

Let your Flowers Grow, on view at Conduit through Nov. 25, is Sonnenberg’s invitation to his fans to step into his cornucopia of references, from Classical and Rococo to American kitsch (he has literally constructed a gilded flower mask for viewers to try on). This show can best be described as a labor of love, in which he pays deference to friends, family, the gay community, and the whole of art history.

Although not much has changed in Sonnenberg’s break-neck work pace, the zeitgeist has shifted dramatically in the past year, and he’s had to do some reckoning. After the political upheaval of 2016, Sonnenberg wondered about the obligation of his work. “There is so much pressure on what this work should be about. Should it be political?” Against a public discourse that practically oozes ire, what could be more revolutionary than Sonnenberg’s generous premise? “Let Your Flowers Grow is about giving yourself permission to grow,” he says. 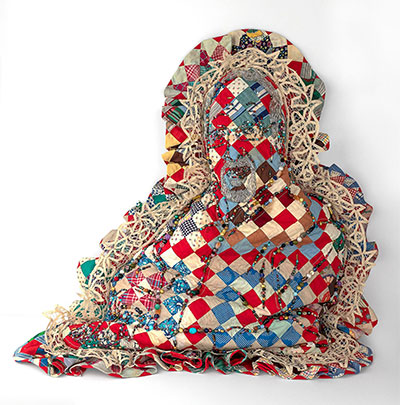 A series of portraits of friends, “people who have supported or taught me things,” places nude figures of gay male bodies on beds of orchids, which the artist views as a symbol of strength. “It’s a weird line between beauty and sexy,” he quips. “It’s like, ‘hey you, gay kid, feel good about yourself!’” An overt criticism of the current political climate just wouldn’t have worked for this artist. The power of his work has always been in an unabashed grounding in personal experience, and a refreshing disregard for traditional distinctions between “high” and “low” culture. “When the s**t hits the fan, I look to my friends and my family,” he says. “I start looking for silver linings.”

Sonnenberg’s optimism isn’t the untempered sunshine of a Pollyanna-type, though. His works borrow extensively from the traditions of memento mori; flowers wilt and things decay. The ceramic vases and candelabras, which are only functional “as much as they help me in my subterfuge,” sag and crack under the weight of their thick glazes. He expresses some nostalgia and a sense of loss of “weirdness” in gay culture. “When I was young ‘queer’ meant weird. As the gay community becomes bigger and more mainstream…”  he trails off, “I miss the weird side, the David Bowie side. I miss the Oscar Wildes.”

Loss and the inexorable march of time seem to weigh on Sonnenberg more at this moment than they did a mere 15 months ago, just before his 30th birthday, but the hours of labor seem like a direct expression of the love he feels for his objects and the people they portray. He described an early morning Hobby Lobby run for gold beads to use for the completion of his mother’s portrait. “It’s your mother, you kinda have to do it.” 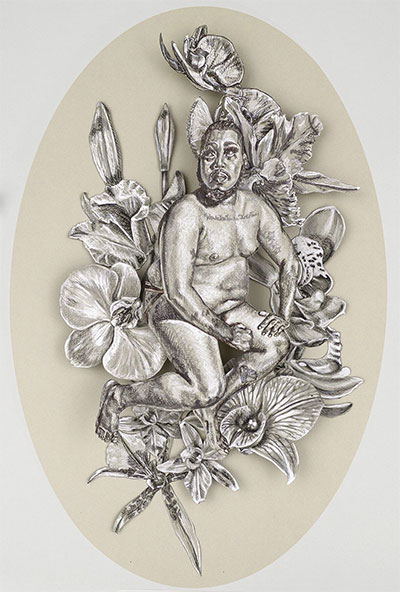 The pillow portraits of his parents display a new kind of awareness, one which may be particular to 30-somethings. Constructed from a found handmade quilt and battenberg lace, they are hand-beaded replicas of his parent’s church directory photos. They are, by turns, glittering and homey and, like his ceramics, evince the force of gravity. “Their understuffed-ness [has to do with] noticing that my parents are aging. I’m aging,” says Sonnenberg. But there is beauty even in this newly-discovered frailty. He props them up, back-to-back on the floor, explaining that “the pillows support each other.”

The “thesis statement” of Flowers… is the glistening gunmetal-glazed baroque Clock (Man Alone Chimes the Time.) It is a textbook example of Sonnenberg’s “more is more” aesthetic. Faceless and presented on a bed of fossilized shells the artist found at his family’s land north of Austin, it is a fitting metaphor for the artist’s thoughts at this moment, existing comfortably in many spaces at once. “I want [the exhibition to be like] are we celebrating or are we having a funeral?” In this piece the kinds of time he wants us to digest are stacked like layers in a cake. In another work we are confronted with the far off time of historical objects or the childhood time of grandmotherly tchotkes, geological time, and the delicate lifespan of humans and flowers. Sonnenberg’s frenetic work pace, the amount of labor—and therefore minutes clocked in each work—is directly correlated with how much weight he places on these ideas. He says, “The time is like an offering.”