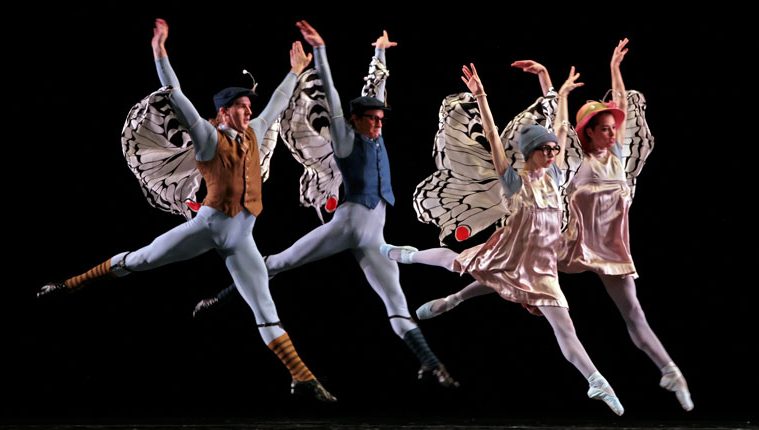 Artists of the Houston Ballet in Jerome Robbins’ The Concert.
PHOTO: AMITAVA SARKAR

Houston Ballet Brings The Concert Back

Wrong seat? Bickering couples in the row in front of you? Enormous hat blocking your view? Just about all of that has happened to me as an audience member, which is why Jerome Robbins’ comic masterwork, The Concert, resonates with me and anyone who has ever been to theater. Robbins’ seminal ballet will be performed as part of “Journey with the Masters,” a Houston Ballet program that also includes Jiří Kylián’s Sinfonietta, a tribute to the Czech choreographer’s homeland, and Ballet Imperial, George Balanchine’s homage to St. Petersburg.

Comedy and ballet are on my mind in part because  Les Ballet Trockadero de Monte Carlo, affectionately known as “The Trocks”, recently strutted their sublime brand of silliness across Jones Hall thanks to Society for the Performing Arts. What a reminder that a holy tradition like ballet is a pratfall in the form of a funny fish dive away from a belly laugh.

Ballet isn’t usually funny, except when it is. There’s something primal about the body in motion. We laugh at a full range of physical comedy, so ballet has every right to join the fun. If you dig deep into ballet’s history, you can see humorous antics all over the place. Houston Ballet will bring back The Merry Widow next season, with one of the most hilarious drunk scenes in all of the ballet canon. Dance Salad fans are still giggling over Christian Spuck’s grand satire, Le Grand Pas de Deux, which featured a bespectacled ballerina with a pocketbook.

Houston Ballet’s artistic director, Stanton Welch, names La fille mal gardée, Kylián’s Symphony in D and of course, The Concert, as the funniest ballets. “I was lucky to perform The Concert many times,” adds Welch, who himself has a savvy knack for dry humor. Consider the outrageous step sisters in Cinderella, the cheekiness in Brigade, the wild theatrics of The Core, and the sly wit of The Three of Us and Divergence. Welch readily admits to including a little levity in his work, but never start to finish. “The Core is definitely influenced by Robbins’ musical theater approach,” says Welch. “My tongue is always in my cheek; I’m more about the droll smirk. I’ve yet to create a work where people are crying from laughter like Robbins.”

Created for New York City Ballet in 1956, The Concert reveals Robbins as a highly a skilled musical theater choreographer, demonstrating his genius in  character development. According to Deborah Jowitt, author of Jerome Robbins: His Life, His Theater, his Dance, this was period of creation that centered on the life of artists.

Yet, it’s never a one-joke-gag with Robbins. “The ballet has such a broad range of comedy, from slapstick to a very subtle and sentimental form of humor,” notes Jowitt. The “Mistake Waltz” is a perfect example, the six dancers never quite get it right, but the way in which they mess up is simply brilliant.

Principal Simon Ball is playing the cigar smoking husband for the second time. “I admire Robbins’ craft for storytelling. Not many choreographers have the talent to create a ballet which requires so much nuance,” says Ball. “This ballet is a timeless study of human psychology.”

Artists of the Houston Ballet in Jerome Robbins’ The Concert.
PHOTO: AMITAVA SARKAR.

About that, Ball is spot-on:  Robbins’ scenario could happen today, except cell phones would be involved. The premise is simple: a group of people gather together to see a piano recital. Things don’t go exactly as planned. Ball sets the scene. “Each vignette features different characters who allow themselves to be lost in the music, and fantasize about the people that they truly want to be,” explains Ball. “My character, The Husband, imagines being able to free himself from his oppressive wife and follow the Ballerina, the object of his desire.”

Principal Karina Gonzalez performed in The Concert while she was at Tulsa Ballet, and is looking forward to dancing the role of The Ballerina for the first time. “At Tulsa, I danced the role of the person in the wrong seat, and that really happens all the time,” admits Gonzalez. “Robbins has a way of bringing genuine human circumstances to life.” Although Gonzalez claims comedy is new to her, she started her Houston Ballet career dancing Kate in John Cranko’s The Taming of the Shrew, showing off her comic chops to great effect. “It has to be honest,” she says.  “He really plays up the character, which is perfectly embedded in his choreography.” Welch concurs, “The dancers have to play it authentically and sincere, that’s how the humor comes through.”

For Ball, comedy is about timing: “We are used to performing choreography on counts, but being an effective comedian is an art unto itself,” he says. “A slightly longer pause for effect or raise of an eyebrow can mean the difference between success and failure. One can begin to imagine why standup comics can be addicted to the pursuit of a laugh.”

Be it spoof or satire, The Concert is not only a chance for Houston Ballet’s dancers to show off their well-honed acting chops, but yet another glimpse into the genius of Robbins’ vast choreographic imagination. He holds up a mirror to the audience, and we get rare pleasure of laughing with and at ourselves.

Journey of the Masters
Houston Ballet
May 30-June 9