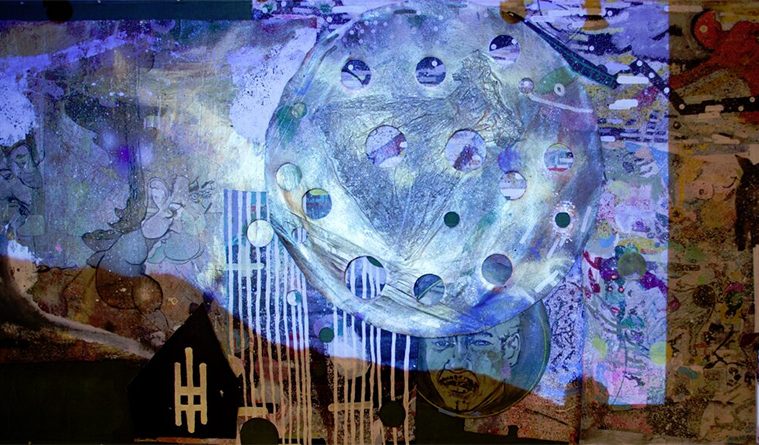 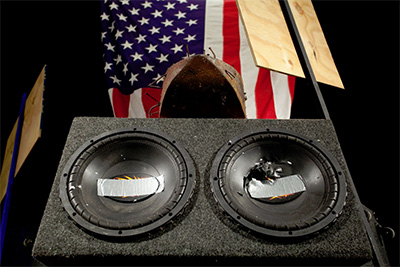 Angelbert Metoyer is a wunderkind painter, sculptor, and multimedia artist with deep Louisiana roots, currently working out of Houston and the Netherlands. He is an almost pathologically productive artist, filling warehouses with his strangely affecting and hard-to-pin down visions. Perhaps his most bankable influence is the once-Young British Artist and Turner Prize-winner Chris Ofili, now an established art star working in Trinidad. Ofili is most famous beyond art-world circles for painting with elephant dung; Metoyer implies a connection in his website’s artist statement: “The materials I employ include ‘excrements of industry’, such as coal, glass, oil, tar, mirrors and gold dust. With these tools I explore themes of waste and destruction, and existential issues of life and death.” Reaching further back for influences, one is reminded first of Basquiat, then of famed Cubist and Surrealist dalliances with African art, and finally of those African traditions themselves, particularly in their shamanic implications beyond the merely aesthetic.

Metoyer has work on view in the Austin multi-venue exhibition Strange Pilgrims through January 24, 2016. Those who find themselves intrigued by the indefinite mythology of sparkling indigo icons traced out in his half-room at the Jones Center are well advised to make the trip three miles east to his solo show at Co-Lab in the Canopy complex. Not because there, in a darkened room filled with the buzz of noise collage, Metoyer’s mythologies become any more clearly decipherable—quite the opposite: The further his iconography unwinds, the more varied the thoughts and ideas it provokes. A gallery assistant tells me that the figure at the top right corner of Metoyer’s biggest canvas, Life Machine (2005), is an angel falling to the moon, which I can now understand as the cratered orb at center. I had thought that the figure, who seems to wear the spotted skin of a cloven-hoofed animal as a business suit, necktie included, was meant as a humorous touch about “putting on” blackness or African identity. Then again, I’m not sure if my gallery guide has privileged knowledge of Metoyer’s intent or is just telling me his own take on the work. Interpretations are sure to vary widely.

A bloody doll tied up inside a cattle skull; a blue idol head crawling on metal filament legs; Olympic sprinter Jesse Owens with magic-marker antennae beside images of traditional African sculpture; flat marble slabs suggesting the clean lines of Hellenic art; a ship on a bloody sea with the red painted text below it: “17 million.” I learn later, not from any supporting material Metoyer has provided, that this number matches the U.N. estimate for total number of Africans carried to the Western Hemisphere in the trans-Atlantic slave trade. Metoyer’s images rise up to the viewer out of a visual cacophony, a clear affinity on the artist’s part for abstract expression that can’t resist eventually resolving into depiction. It’s clear that Metoyer, scion of one of the first black landowning families in what is now the American South, is wrestling with the subjects of African and African-American heritage, the diaspora, and slavery. But it’s also clear he’s building an archetypal system, rather than an argument: Mapping the fixed stars of his personal identity matrix into an astrology of angels, horses, demons, imaginary animals, bluesmen, a zombie-faced John the Baptist, and who knows what else exactly. The final effect, like any religious iconography, is the suggestion of a complete model for confronting the chaotic world: a buzzing, hypnotic spell for us to fall under.