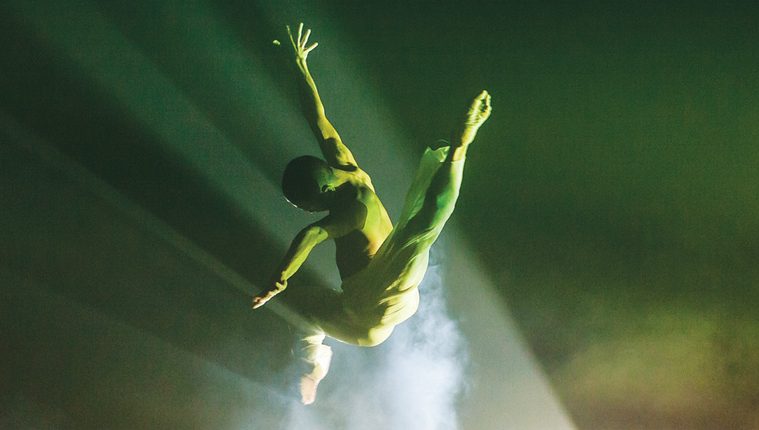 A + C: What’s the secret to performing in August in Houston?

Jane Weiner: It’s the perfect time when folks are sick of television re-runs and are ready for something new and live!

A + C: I like the idea of dance at a Lemonade Stand.

JW:  Lemonade stands are awesome. I like that people are drawn to them. Maybe subconsciously I was hoping people would see an artistic lemonade stand and have to stop and be part of that energy. The first year we did these t-shirts that said, “When life gives you lemons, make art.” My goal is to make art more common in all of our lives. Maybe another part of my dream is that we all stop at the artistic lemonade stand, spend our five cents, support creativity, and drink it down.

A + C:  Usually, you start a piece way in advance. Here, you are creating within a short window of time. Are you giving up your choreographer-control-freak habits?

JW:  No, I’m still a control freak; I just drink more coffee. Although rehearsal periods are shorter, a lot of these ideas have been in my head for a long time. There are times when I feel like the Star Trek episode where this evil brain is causing havoc for James Kirk and his crew. That reminds me of my brain before I start a project. I have changed to work fast and furious.

A + C:  Do your dancers factor into your speedy equation?

JW:  Yes, many of the dancers have been with me for so long that we are starting to finish each other’s sentences — so less “physical explaining” needs to happen. They know my style so setting things on them is a lot more efficient.

A + C:  How do you deconstruct Mozart’s Requiem?

JW:  OK. I’m going to admit it, this project scares me.

A + C:  It would scare me, too. Mozart is not your usual musical choice.

JW:  I like to change directors physically and mentally all the time. Just ask my dancers and office staff. Wolfgang is keeping me on a tighter musical beam than this gal is used to. It’s good to challenge oneself and to be uncomfortable, to push my personal envelope and try new pathways.

A + C:  Let’s get to the WRECK-WE-UMMM, which is hard to say without laughing.

JW:  I don’t think I can deconstruct his music, which is so classic and laden with stories, mysteries, and intrigue. So I will not even touch the music, although I did find a funky jazz version for one of the sections. I will be using puppets, Houston Met, some faces from Houston Ballet, my tried and true lovely Hope Stone dancers, former dancers, actors Justin Doran,Troy Schulze, Stanton Welch, and mercury love birds Ana and Jonathan Godfrey.

A + C:  You do seem to be going the way of the dance theater maven.

JW:  I love when my dancers pull on their performance skills in a new way. It can also be age as well. I am not so interested in the technical aspects, as in “look how high my leg can go.” I’m more engaged in what I can evoke from my dancers and the audience. “Did something happen while we were in there? (there being the studio or stage)” is a question I ask myself.

A + C:  Walk us through the rest of Hope Stone’s season.

JW: I move from the lovelies of Lemonade Stand into a shared evening with The Houston Metropolitan Dance Company in November at the Wortham. Then I go site specific for an art/dance crawl on 19th Street in April. We always end the year with our cutting edge kids art, in Simplify.

JW:  This past year, I worked a lot on the administrative side of Hope Stone. I was sadly not in the rehearsal room as much as I wanted. Yet, the year was one of my most enlightening and grounding. So I am on a roll, a big roll. I am also very passionate about arts advocacy. I want to be sure that everyone has the chance to do arts. We are not just making artists, but making citizens. I am revved. I plan to do a performance piece in four years where I run for president. My platform will be “art for all.”

Andy Noble: You can take the metaphor in a couple of different ways. Ether is a drug, formerly used for surgical procedures as an anesthetic that put the patients in sort of a twilight state. The word ether also refers to the regions of space beyond the Earth’s atmosphere. As we are working with the idea of being neither here-nor-there and suspended between worlds, we felt the word ‘ether’ needed to be included in the title of the evening. If someone didn’t quite want to be in this ethereal place, they might just express that by fighting back or “spitting ether.”

A + C:  You mention that the piece has a nightmarish quality, so we are not talking about summer fluff. Bring us into your bad dream.

AN:  Well, I don’t want to give away too much, but one of the main concepts we are investigating is liminal dance—dance that is at the threshold of two different states.

AN:  For example, this has led us to think about where the mind goes when it’s in a coma-like or drug-induced state, and the afterlife, specifically purgatory. The openness of this concept allows us to work very subconsciously and enter spiritual, mythical, and even science fiction worlds. We are having a lot of fun inside of the process, and it allows us to bend reality and enter the surreal. So far, there are images of hospitals, gas chambers, mythical Lorelei, and dissolving spirits. Our love of technology and light design works well with these explorations, and enables us to investigate the dance in a sort of imagistic way that is quite stunning at times.

A + C:  I see your love affair with light continues. What first triggered this interest?

AN:  Both Dionne (Noble) and I have our MFA degrees in Dance Technology and have had a long love of dance film. In filmmaking, the director is able to completely control what the audience sees. By utilizing light in non-traditional ways, we are able to focus the audience’s attention in a similar fashion, so that they see details that we think are important. We can create worlds that are full of mystery, and we can hide important elements of the dance to create tension. Alfred Hitchcock was a master at creating this kind of tension, as he would often not show the action, but instead a character’s response to the action. This allows the audience to use their imagination, which is much more powerful than anything I can create.

A + C:  Do you think of light as yet another mover?

AN:  I do think light can dance and even breathe, yet it can easily overshadow a dancer if used incorrectly.

A + C:  There is often a play between what is seen and what happens in the dark, something hidden from the audience, which is terrifically exciting. Are you developing this concept in this show?

AN:  Yes, this effect really allows us to enter this very surreal world. We are creating walls of fog and light that the dancers magically appear and disappear through. We also have light pads that the dancers wear on their hands that allow only portions of their bodies to be seen. Another section has an ether chamber that engulfs the dancers and replaces them with a projected image of their selves.

A + C:  What does David Deveau, your new collaborator, bring to the NobleMotion table?

AN:  David has been fantastic to collaborate with on this project. He has been at every rehearsal and is involved in every decision. It’s very unusual to have this kind of intense cross-disciplined collaboration. The interesting thing about David is that he started his MFA in light design and then switched his degree to dance. He choreographs, and even dances a little, too.

A + C:  I assume you have forgiven me saying that you look like Dick Van Dyke. It’s just that you project this sweet, football-loving dad image, and your work is gritty, edgy and street-wise. You have also positioned your company aggressively on the scene and in a larger arena. What’s your biggest hope for NobleMotion?

AN:  I would love for NobleMotion to have a national reputation for making great work. We want to do all of this and still have a healthy and happy family.