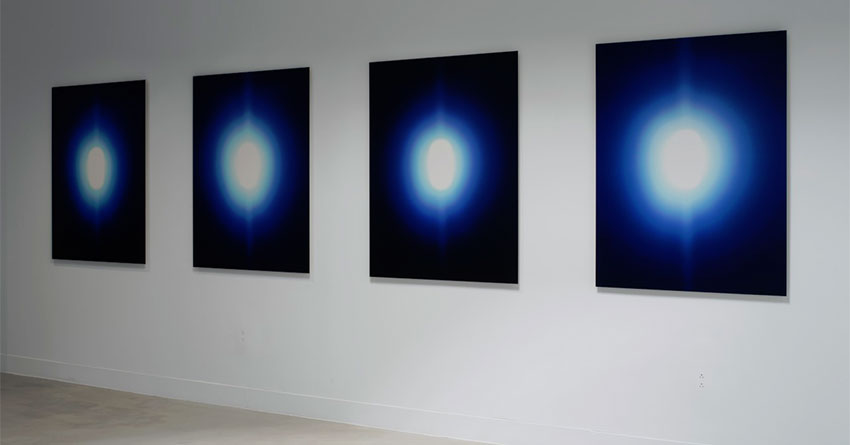 Light of the Midnight Sun

Erika Blumenfeld’s photography and video installations, on view through Oct. 17 at Dallas’ Zhulong Gallery, are graceful, spare, and austere. Her time-based pieces are the result of travel to Antarctica for a residency with the Interpolar Transnational Art Science Constellation, where she studied and documented light phenomena.  For the Light Recordings series she fabricated her own lens-less camera to record light phenomena as it interacted with the sun and moon.  Reminiscent of the Light and Space movement in California in the 60s and Minimalism in general, this work operates in the area that sits between the artist and object at a kind of remove as no visible trace of the artist’s identity seems to come through. This is exactly the place where this work departs from minimalist dogma and the distillation of content into form; Blumenfeld’s images are essentially of nature, in a specific place, time, and duration; therefore, they are filled with commentary about ecological and environmental issues transformed into a minimalist vocabulary.

In the stunning Magnetism (Antarctica), 2009/2015, a 4-channel synchronized video projection with audio, Blumenfeld captures video of solar wind particles that are observable in the Polar Regions. The particles that manage to break through form a display of auroras, known as aurora australis in Antarctica, that offer light filled representations of energy transfer in the sky. The ambitious installation was created by filming for fifteen minutes every hour, for 24 hours, in order to capture the daily cycle of light phenomena and the complex color formations that we mostly never see. The final projected video piece consists of a row of 24 rectangles connected from left to right horizontally. Each band of color runs simultaneously in the fifteen-minute loop, light sounds included, such that none of these natural color schema are the same. Since the sun is up most of the time at the pole only one black band representing the short-lived night sky is present, the rest are of celestial blue, pink, teal, and purple, naming only a few of the amazing colors. For a moment the viewer may think of Judd and his serial structures combined with Flavin’s light experiments, but this quickly passes after the full scope of Blumenfeld’s project becomes apparent.

For a more monochromatic realm and modernist grids look no further than Midnight Twilight (Antarctica), 2009/2015, in which five rows of five square photographs of the sun are arranged to form an archive/index of light and reflectivity.  During autumn the sun disappears for a few hours beneath the horizon.  In this piece the sun is photographed every hour from midnight to midnight, exposing the subtle shifts as time passes. The piece suggests, as do most in the exhibition, that these images are a document of Earth’s atmosphere and the interaction of humans upon it, such that it may not look the same as time goes by. With carbon emissions and global warming, the polar ice caps where the images were obtained are in danger of melting, altering the interactions forever. The viewer can read the images starting at either side and still feel the bright power of nature and the ceaseless flow of the universe, never forgetting our place in it.

The exhibition at Zhulong illustrates the quality and depth that explains why Erika Blumenfeld’s art has shown everywhere from the Tate Modern in London to the Albright Knox Art Gallery in Buffalo, New York.