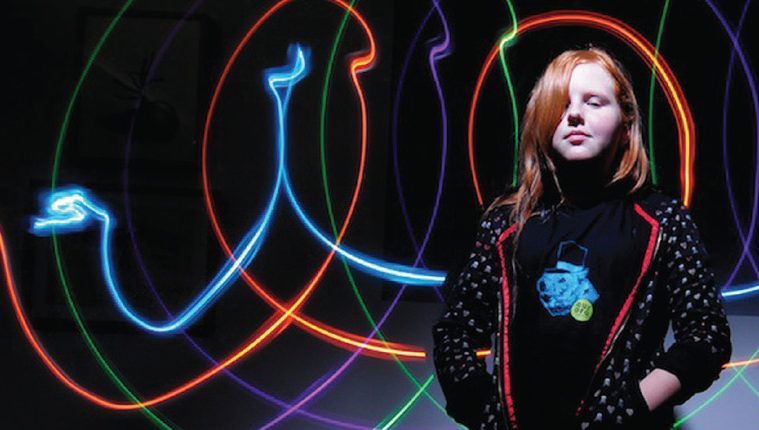 The Micro-Cinemania of Aurora Picture Show

Rewind the past 14 years, and you’ll see Aurora Picture Show – the little micro-cinema-that-could – reelin’ out some of the best moving image art and public programming in the Texas region.

Aurora is the oldest microcinema in the Southwest, augmented by a tenacious history of screening artist-made films in non-traditional spaces, including the original location – a church building on Aurora Street in Houston’s Heights neighborhood.

This member-driven, non-profit organization has crafted its reputation as a champion of quality media art literacy and programming, bringing award-winning artists, curators, and scholars to Houston including: Laurie Anderson, Soham Mehta, Yasmine Gomez, Melissa Hung, Joan Jonas, Christian Marclay, and others too numerous to list here (including my personal favorite – Japanese-Canadian food-art-genius, Nobu Adilman, one of the three mechanics who build D-I-Y cooking equipment from junkyard parts, found objects, and locally-sourced ingredients on the television series, Food Jammers).

Several years ago, Aurora’s attendance stagnated. Things were in pause mode. The microcinema’s then director, Andrea Grover, decided to retire into the role of Founder, relocating to Sag Harbor, New York to pursue other artistic endeavors. The church building was sold and is now 14 Pews, another microcinema art space.  It was time to hit reset. That reboot produced an impressive surge of energy.

In 2007, Aurora set up offices and hosted the coveted video library and salons in a bungalow near the Menil Collection. Since then, curator Mary Magsamen, executive director Delicia Harvey, associate director Rachel Blackney Tepper, staff members Camilo Gonzalez and Guy Harrison, along with a host of cherished volunteers have been collaborating with organizational partners: St. Arnold’s Brewery, Discovery Green, Buffalo Bayou Partnership, and DiverseWorks (Flicker Lounge) to name a few.

Together, they present inventive screenings, events, and programs throughout Houston as part of Aurora’s strategic plan and in accordance with their mission. Add to that numerous grants and awards, including a Warhol Initiative. Hitting play never felt so good.

“The space is set-up to accommodate screenings and performances and delivers on nearly 100% of the items placed on a recent Facility Wish List created by the Aurora Facilities Committee during our strategic planning session,” says Harvey. “With the move to the new space, we hope to grow our programs and shift our identity toward becoming a media arts center for Houston.”

The building is a former artist’s studio space and comes courtesy of Molly Gochman, a long-time supporter of Aurora and former board member. It’s a familiar space to both Aurora and its members – Gochman has allowed Aurora to use the space over recent years for the Extremely Shorts Film Festival. It was also the home of the 2009 Aurora Award gala honoring Christian Marclay.

In its new Bartlett home, Aurora will continue to “create meaningful community-oriented exchange between artists and audiences, increasing the variety and breadth of cinematic experiences available to the public.”

Aurora’s education programs have proven central to these experiences and the demand for its filmmaking and digital technology courses are high. Aurora is working to grow these programs for audience and community impact through partnerships with organizations such as Writers in the Schools, Project Row Houses, Young Audiences of Houston, Girls Rock Camp Houston, and others.

“As arts education funding decreases and access to media increases, we want to help lead efforts for exposure to media arts for Houston youth as a way to encourage creative expression in positive, artistic ways,” says Magsamen. “We realize that in addition to exhibitions, the best way to grow our audience and encourage future auteurs, is to help them understand the importance, history, and process behind these films.”

Aurora has partnered with organizations such as the Austin Film Society, SXSW, Artpace, Fusebox, Austin Museum of Art, and Arthouse. This brings a curated series of films to these destinations and has its audience  participating in talks specific to alternative programming.

“We hope to continue to tour to neighboring cities in Texas to share films with more audiences, as well as develop relationships across the state that help increase our mission and programs,” says Blackney Tepper.

If you want to be part of the Aurora audience, your most immediate opportunity is to snag an invite to the exclusive Bartlett housewarming event. This is a “members-only” party, so you’d better join – and soon. You can also donate to the Aurora Kickstarter campaign for membership rewards and other swanky perks.

Members and non-members alike can attend the first public event in the new space which is the 15th Annual Extremely Shorts Film Festival on June 29 and 30. Comprised of short films from around the country, each three minutes long or less and with cash prizes for 1st, 2nd, and 3rd place winners awarded by audience vote, Extremely Shorts is arguably the gateway event for your Aurora addiction. The festival is juried each year by an accomplished film/video expert. This year Aurora welcomes Andy Smith from Nickelodeon Theater in South Carolina.

Fast forwarding into Aurora’s future, many of us moving-image-art-lovers see the organization securing a worldwide reputation as the center for Houston media arts presentation and education.

All you have to do is sit back and watch.

–NANCY ZASTUDIL
Nancy Zastudil is an itinerant curator and writer who enables Aurora addictions whenever and wherever possible.