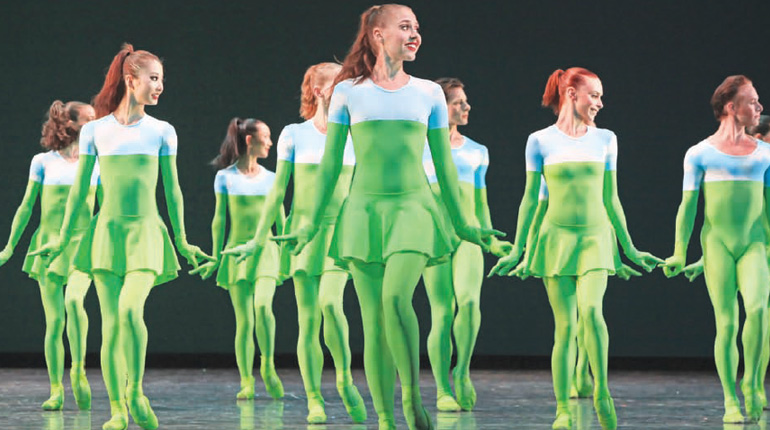 Made in America and Beyond

Does it matter where a ballet is made? Houston Ballet’s trio of works under the banner of Made in America, followed by Giselle and Romeo & Juliet, offer a rich discussion of regionalism in ballet.

Mark Morris’s breezy Drink to Me Only With Thine Eyes, commissioned by Mikhail Baryshnikov for American Ballet Theatre, is a perfect example of Morris’s idiosyncratic blend of naturalness and impeccable musicality. Morris is a dance cowboy if ever there was one, a renegade son of the great northwest, and one of the most larger than life personalities in all of dance. If Americans are known for extreme individualism, Morris holds that mantle in dance.

“Growing up in Australia, I was exposed to the more dark, intellectual thread running through European contemporary dance, and less knowledgeable about American modern dance. Mark’s work is heavily documented, so it was on my radar,” says Stanton Welch, Houston Ballet’s artistic director. “He is a unique American voice. There’s always this joy in his work, often a smirk, and a sense of pleasure. His work makes me wish I was still dancing.”

Drink to Me Only With Thine Eyes, known for its glorious casualness, is set music by American composer Virgil Thompson. “I appreciate Mark’s attention to American composers,” says Welch. “Look at Sandpaper Ballet, which is set to Leroy Anderson.”

The plot thickens when we get to Nicola Fonte’s world premiere, See(k). Fonte may be from Brooklyn, NY, but his career was mostly built in Europe, where he danced with Les Grands Ballets Canadiens de Montréal and the Compañia Nacional de Danza in Madrid. “You can see Kylián, Duato and Forsythe’s influences in his work,” says Welch. “He absolutely brings that European aesthetic.”

As we continue into the season, there’s a further bounty of riches in considering a ballet’s lineage. Giselle has one convoluted history. It premiered in Paris in 1841, but it’s the 1884 Russian version that we know and love. Houston Ballet will perform their most recent production at Miller Outdoor Theatre in May, staged by Russian ballerina Ai-Gul Gaisina, who spent her later career at The Australian Ballet. “You see the Russian influence in the Vaganova technique, which uses a straighter back and less rounding of the shoulders, than in Maina Gielgud’s version,” says Welch. “Think of it as the same script, but with a different accent.”

Balanchine looks to imperial Russia in Theme and Variations, originally created in 1947 for American Ballet Theatre Principal Dancers Alicia Alonso and Igor Youskevitch. Everyone knows the Russian born Balanchine became the pinnacle of American modernism in ballet. His famous quote, “I am more American than Russian,” reminds me of the time when the nation grew it ballet roots from the talent of those who landed on our shores. Yet, Balanchine still turned to the music of the great Russian composers, notably Stravinksy and Tchaikovsky, for his ballets. “Theme and Variations feels American to me,” adds Welch.

Romeo & Juliet, running June 7-17, premiered in 1940 in Russia. We might guess that Ben Stevenson’s version would lend an English flavor, having come of age around the great English choreographers, but according to Welch, we would be wrong. “It looks like Ben, he’s every intercontinental,” he says. “Ben merges American and European style. You can see traces of Englishness in his understated style.” Like Balanchine, Stevenson grew his choreographic chops in America, first at National Ballet in Washington, DC, then here in Houston, where he led Houston Ballet from 1976-2003.

For Welch, the boundary lines in ballet get murky, especially in considering his own Australian heritage. “We are all immigrants.  That’s what makes America and Australia so special. That’s what made Balanchine love this country.”

“I’m coming to the point where I’ve been in Texas almost as long as I danced with The Australian Ballet. At what point do I become a Texan?” Welch asks. The choreographer can carry off a pair of Western boots like the best of them, and his ballet Tales of Texas is spot on in its characterization of the Lone Star State. Clearly, the man has earned his Stetson.