SAN MARCOS — The Witliff Collections at Texas State University – a hidden gem located on the seventh floor of the Alkek Library – has been collecting the work of Manuel Álvarez Bravo, a leading Mexican modernist photographer, for more than 20 years. All that groundwork has paid off, as the museum’s first Bravo solo exhibition, which is joined by a companion show of several dozen photographers’ responses to the beauty of Mexico, makes clear.

Born in Mexico City in 1902 just eight years before the Mexican Revolution, Bravo was self-taught, a portrait, street and landscape photographer whose lens probed the complex interplay between fantasy and reality. He died in 2002 after a career that lasted into the 1990s, but he came of age as an artist during the cultural ferment of the 1920s, a period heavily influenced by the European avant-garde and such movements as Cubism and Surrealism.

The show’s earliest work, Niño Orinando/Boy Urinating (1927) – shows a photographic sensibility eager to explore the subtleties of form as well as the poetic nature of subversion. Indeed, Boy Urinating was striking enough that it caught the attention of eminent American photographer Edward Weston, whom Bravo befriended in the late 1920s.

By the 1930s, Bravo’s interest in formalism and formalist abstraction had evolved to include a concern with finding the extraordinary in the mundane. Parábola Optica/Optical Parable (1931) is an iconic image from this period. What makes the photograph unique is the way Bravo flips the negative and prints the resulting reversed image. With this simple technique, he transforms an everyday urban sight – an optician’s storefront – into a fable about the limits of human vision. He also reveals what would become a signature penchant for visual storytelling and symbolism.

Bravo eventually turned his photographic gaze on the mountains, deserts and expansive horizons that comprised Mexico’s natural world. Among the prints that demonstrate his mastery of landscape photography is Bicicletas en Domingo/Bicycles on Sunday (1966).

Stark in its simplicity, this image of four cyclists riding across the Mexican desert contrasts the transience of human life with the immutable grandeur of nature. It also shows the allure shapes, textures and patterns still had for Bravo. This fascination with form would once again dominate his later work, which Bravo continued to produce in the face of increasing blindness. 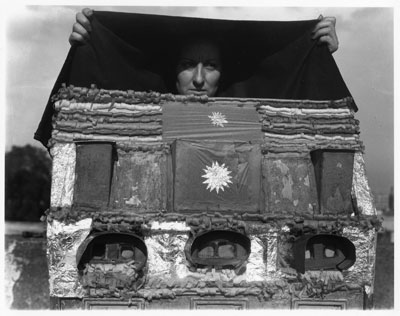 Complementing this survey of the modern master Bravo’s career, México lindo provides a cursory look at 49 artists, photojournalists and documentarians – Mexican and international – who have trained their lenses on Bravo’s country. Curator Carla Ellard has subtly grouped the more than 100 images according to universal themes – such as women and girls, men and boys, working life, children at play, religious festivals, and leisure activities – reinforcing the idea that the images are about both Mexico and subjects that affect all people regardless of time or place.

Many of the photographs in the México lindo exhibit share the same modernist preoccupations evident in the Bravo exhibit. In Hector García’s Entre el progreso y el desarollo/Between Progress and Development (1950), for example, a barefoot street urchin stands on dirty wet street between two new American cars and suggests a photographic sensibility that is as much attuned to the formal elements of composition as it is to making social commentary.

In the photojournalistic vein of García, Graciela Iturbide – who studied under Bravo – offers images that are neither as self-consciously symbolic nor surreal as those of her mentor.  In Velo negro para el viento /Black Veil for the Wind (1988), a child strains against the mother who holds him/her. As realistic as the photograph is, the black veil that the child wears along awkward angles created by the child’s body and the camera create a image that is Bravoesque in its concern with disrupting visual expectation through apparent incongruity.

Some of the México lindo images represent a more postmodern departure from Bravo. Alinka Echevarría’s cut-out color digital images of individuals wearing or carrying the Virgin of Guadalupe on their backs suggest both artistic and cultural fragmentation and re-assemblage. Kate Breakey’s pristine paint-on-photograph landscapes reveal a similar concern with post-production image manipulation – that is, with the actual making of an image before the formal elements of the image itself.

The images – and photographers – of the Manuel Álvarez Bravo and México lindo exhibits celebrate the grand and glorious diversity that is Mexico. At the same time, they also offer insight into the evolution of photography as an art form. The ultimate result is a visual experience that is as moving as it is aesthetically mesmerizing.