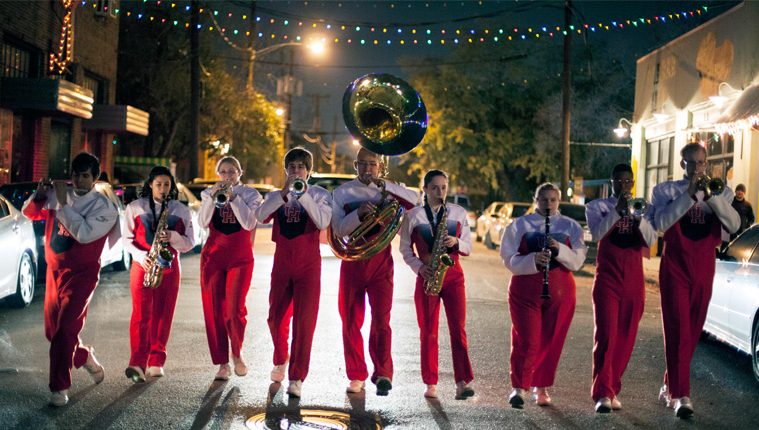 Houston, get ready: A student marching band turned experimental musical cadre is poised to create free-form, funky, soulful, danceable rhythms at downtown’s Discovery Green later this month. This parade-gone-wild is the creation of world-renowned musician and composer Daniel Bernard Roumain who, as University of Houston Mitchell Center for the Arts Artist-in-Residence is deconstructing conventional modes of music-making and taking artistic freedom to the highest level.

Artistic freedom is, in large part, what prompts the Mitchell Center to cultivate collaboration across the performing, visual, and literary arts. License to move among and within traditional artistic disciplines is what the Mitchell Center, its programs, and its artists, are all about.

Roumain is a classically trained composer, performer, violinist, and bandleader of Haitian-American heritage. Popularly known as DBR, he blends funk, rock, hip-hop and classical music; what results is an energetic and experiential sonic form. As part of his long-range residency, which began earlier this year, DBR is developing En Masse, a project that includes En Masse Studies & Etudes, a new composition commissioned by the Mitchell Center and bravely performed by the UH marching band, Spirit of Houston. En Masse is directed by former Mitchell Center Artist-in-Residence and famed multi-disciplinary artist Marc Bamuthi Joseph, in collaboration with UH Director of Athletic Bands and Moores School of Music Assistant Professor Troy Bennefield.

En Masse Studies & Etudes are 12 five-minute works created to be performed by forces ranging from 5 to 500 musicians. This four-hour-long performance offers a wide range of opportune moments for experimentation and enjoyment (don’t be intimidated by the duration — park visitors and audience members are free to come and go from the performance as they please).

The project is a systematic, comprehensive look at contrapuntal music (the general movement of two melodic lines with respect to each other), with an emphasis on Haitian and African-American musical styles, mostly kompa and soul music. The musicians are encouraged to read from the score, freely determining tempo, dynamics, and other musical parameters. As glimpsed during last month’s Mid-Main First Thursday En Masse sneak-peek performance, it’s highly visible, definitely audible, lively, accessible and most of all, incredibly fun.

While traditionally “in residence” is defined in terms of the artist’s physical accommodations, the Mitchell Center embraces a broad interpretation, identifying residency in terms of specific communities, surroundings, and access to resources — an approach that creates deep meaning and diverse opportunities for the artist as well as the city.

“Our residencies are project-based, meaning that we invite artists to develop a new work and we present the final product. Often, we organize a series of public programs around the residency, to open up the artistic process and engage the public with the artist,” says Farber. “The same is true with DBR’s current residency, which contains three separate presentations over the next two years.”

The Mitchell Center is a nomadic organization, founded with an endowment but sans a venue to use for programming. Offering a “residency” program may seem mismatched to such an organization but Farber explains the benefits of their nomadic operation:

“It has allowed us to build each project from the ground up. When we launch a residency, we ask the artist what kind of time, studio space, housing, and venue they will need, what community or neighborhood they need access to, what researchers might they meet with, what sites they wish to explore, etc. The Mitchell Center facilitates all of this access. We are particularly gratified when those resources — artistic, intellectual, or otherwise — are found within the University of Houston itself.” The “ground-up” development necessitates that Mitchell Center resident artists be highly self-directed and allows for a flexibility that is lacking in most traditional residency programs.

Selecting artists for residency is based on several factors, including the university’s urban research agenda as well as the artist’s ability to connect with students and faculty in new ways (i.e., outside of the traditional master class or critique format). This means questioning whether or not the artist and their project relies on being immersed in a complex, diverse city like Houston and if their research and creative development can be served by the city — and vice versa.

Farber stresses that this line of questioning allows the Mitchell Center to focus on developing visionary artworks that are connected to Houston’s communities, industries, and cityscapes while not being specifically about Houston. A delicate but vital point of emphasis which helps to prevent the work, and the Mitchell Center, from becoming predictable.

And, as you might imagine, balancing artistic freedom with responsible programming is anything but predictable. Farber admits that during the research and development phase of nearly every project, they reach a crisis point and ask, “What are we doing here? Can this really work?”

“With DBR, we initially just knew he was going to work with our band and there would be an event at Discovery Green. Since then, he has created new music, we identified Marc Bamuthi Joseph as a collaborator, and the structure of the project emerged, she says. “In the case of En Masse, we knew we needed another collaborator; that’s when we called Bamuthi who has anchored the project in its concept of gathering together and traversing public space. This is reflected now in the choreography, as well as DBR’s amazing music.”

Crisis or not, the world is changing quickly in terms of how art is created and consumed. But Farber and the Mitchell Center Artists in Residence are already holding themselves accountable, saying, “Offering opportunities to participate in live events is our answer to that.”