Marina Adams at The Modern – Alt

Those are not words used to describe 2020, a raucous presidential year beset by the COVID-19 pandemic, which has 231,000 people in the United States, shut down much of the country and led to record unemployment.

But that’s how Alison Hearst, Associate Curator at the Modern Art Museum of Fort Worth, describes the work of painter Marina Adams.

Adams, who splits her time between New York and Parma, Italy, has spent her career instilling passion in viewers with her colorful, abstract paintings, prints and gouaches, linking contemporary life and universal patterns.

Visitors to the museum can see and experience seven large, colorful abstract paintings and 16 small gouache works on paper by Adams until January 10.

“Her use of color is so phenomenal. It’s unexpected and idiosyncratic. It’s really soothing and calming,” said Hearst, who organized the show as part of the museum’s FOCUS series.

“One of the artist’s roles in society is to wake people up. Right now, people are killer mad, but my true belief to fight against murderous anger is the only we can counter the negative through the positive,” she said.

“A visual experience is powerful. Paintings that have an effect stop you,” she said.

In OZ, a large painting from 2018, thick purple and brown lines zig zag between light purple, pale and bold yellows triangles. In Cheops, another piece from 2018, an x painted in two shades of blue stretch along the canvas, with tan, brown, red, green and light blue triangles stretching vertically and horizontally.

“When I try to choose colors, I try to make unexpected choices,” Adams said.

Her work is a study in contrasts and unlikely pairings, including meticulous organization offset by improvisation. While she sketches before she paints, she moves furiously along the canvas as well, creating thick-but-loose brushstrokes. She balances the idiosyncrasies delicately, after experimenting early on and sometimes failing.

“The longer you work, the harder it is to create an experience,” she said. “The thing about art is you have to come through failure. You have to make worse choices to see a better self,” she said.

Her eye-popping paintings aim to slow down viewers, open their senses and minds. “Paintings that do have an effect stop you. When your senses are more open, we recognize we are on a better path than the one we were on,” she said. 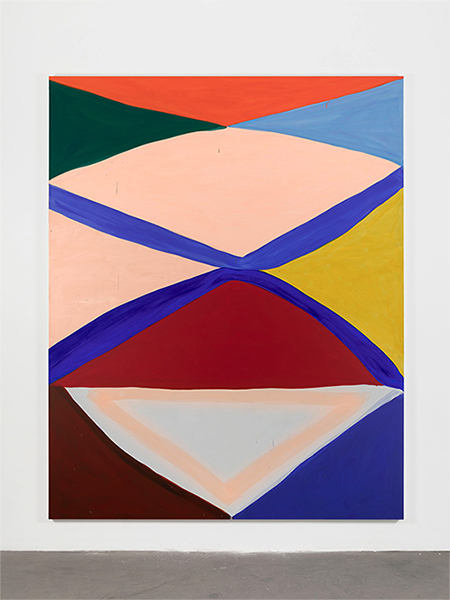 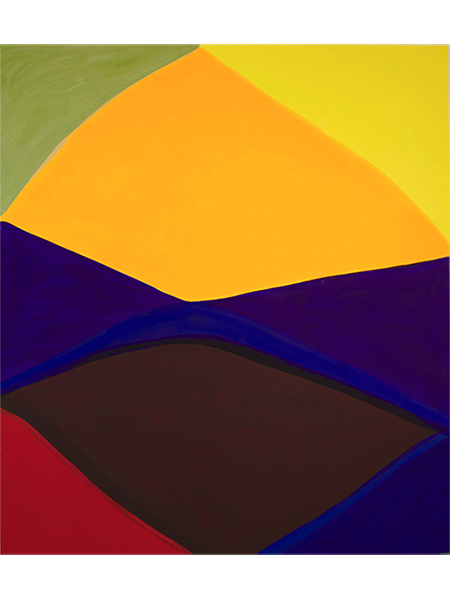 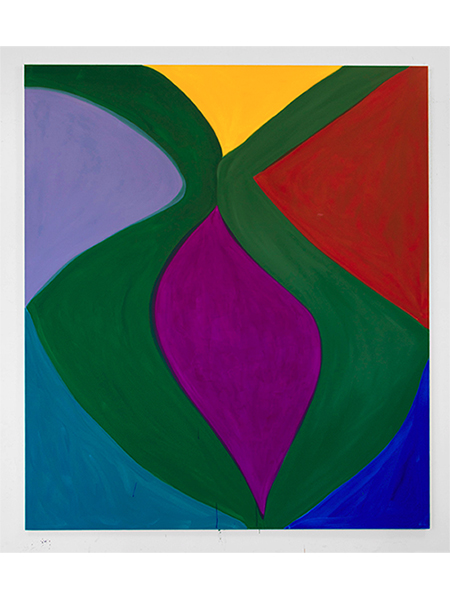 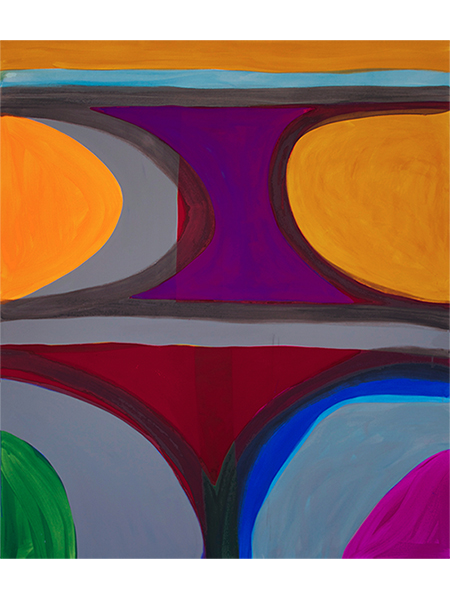 Her work is referential, constantly finding the connections between objects and patterns from the past and in the present.

In Cheops, she references an ancient Egyptian pharaoh for whom the Great Pyramid of Giza was built. But these references appear elsewhere. She saw the same diamond pattern in a rug and in a Greek statue.

“The same pattern is universal across cultures and generations,” Hearst said. “We’re all alike. It resonates.”

Past works, such as the Peace Paintings, which are not on display, reinforce this motif. The circles vary in shape, size and color. The circles could be a tire or a wheel of cheese. But the series is titled “peace. 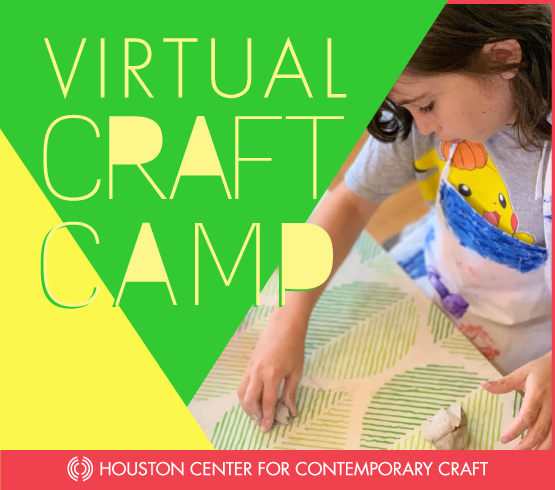 “Every time the viewer sees then, they say ‘peace,’” Adams said.

The shapes and patterns in the paintings at the museum continue Adams’s focus on the current political climate. Though the titles are less clear than “peace,” she believes the viewer will be so visually stimulated they will not need rhetoric.

“As artists we use language with titles. It’s really about putting love in the world. Love is very powerful, the only way to turn things around,” she said.