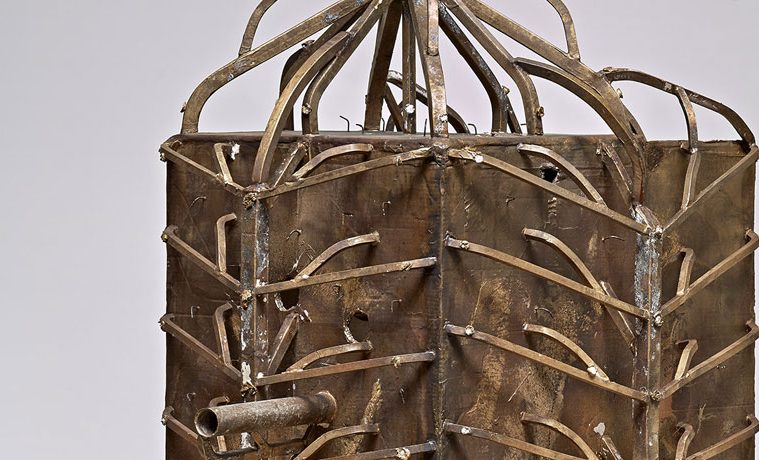 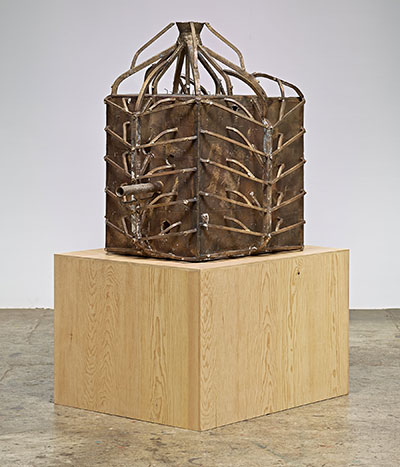 In the latest example of the Nasher Sculpture Center’s foray into contemporary art, Mark Grotjahn Sculpture is the first museum exhibition to focus on a body of work in this discipline from an artist primarily known as an abstract painter.  Based in Los Angeles, his Butterfly series of monochromes were executed between 2001-2008; independent curator Douglas Fogle refers to this series as Grotjahn’s “breakthrough work.” Now, after seeing the Butterfly series through to the Circus and Faces series Grotjahn decided to take a series of unexhibited polemical cardboard sculptures to a more serious level by casting them in bronze, using the lost wax method, and painting many of them with abstract imagery.

The painted surfaces bring to mind Pollock, Dubuffet, Monet, Picasso, and Twombly, to name a few. Many retain remnants of the corrugated cardboard, often carved and modified by Grotjahn before casting.  Afterwards, he finger-paints many of them, sometimes front and back, while others simply testify to the result of the casting process itself. They have primitive tribal-mask qualities that Grotjahn says “reference artists who reference primitivism.”

This modest statement conceals the fact that these pieces are original and extremely challenging works of art that combine large scale abstractions in yellow, green, blue, and purple with the texture of torn, cut, and carved cardboard. All of the pieces retain the shapes and flaps of the original boxes. To this he adds long tubes, sometimes two, which look like noses that project horizontally from the image plane into the gallery space. 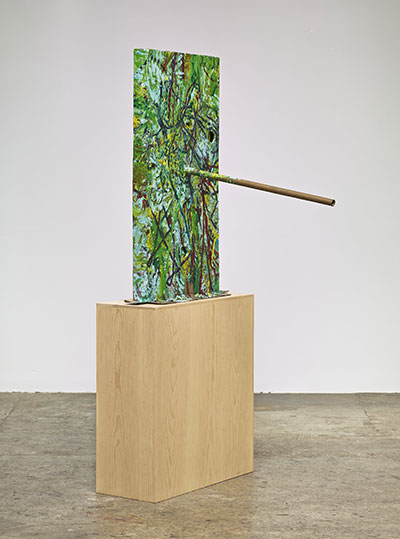 These tubes disrupt the notion of tableau in art and disorient the viewer: Should the works be framed mentally as paintings, sculptures, faces, or all three at once?  Or even: Are they acceptable as art objects at all? Early in the history of modernism (traced by Thierry de Duve in a series of recent Artforum articles), this type of incomprehensibility ensnared Manet’s Luncheon on the Grass, 1863. The Salon rejected the painting because it lacked, or defied, the necessary composition that established a tableau at that time; now, Grotjahn’s pieces disrupt and challenge the visual experience that codifies the definition of art.

For Manet’s judges, not comprising a tableau meant that his painting did not qualify as art. Now things have changed; we find ourselves within the sensibility of an aesthetic pluralism that accepts a stratified array of mediums and styles.  Or as de Duve would argue, the institution of the Art-in-General System, where anything can be art. In Grotjahn’s case, is he thumbing his nose at the art community or the museum system, or do his pieces ask us to go along with the humor embedded in the work?

We are left to make up our own minds in response to what seems to be the Nasher’s bold proposition about the veracity of this body of work as art. The pieces look great in the central gallery, starting at the southern end with violet and blue, seeing their way through to bronze and yellow hues and ending toward the north with green and the sky blue reference to Monet in Untitled (Study of a Figure Outdoors: Woman with a Parasol, Facing Left, French Mask) 2013. An uncanny art brut quality imbues all of the work with an irresistible presence that should bring even the most skeptical visitor back for seconds.  We have not seen the last of Grotjahn the sculptor with this exhibition; it’s only the beginning.