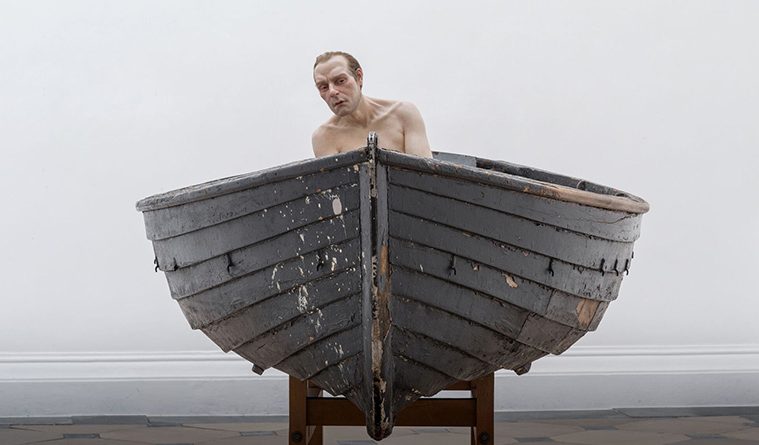 Master of Scale and Detail: Ron Mueck at Museum of Fine Arts, Houston 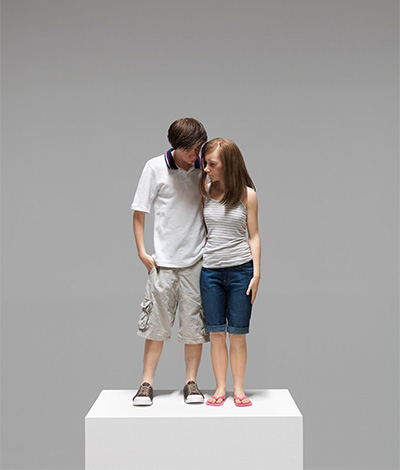 Ron Mueck got his start as a puppeteer, learning the trade from his family.   Early in his career, he worked for an Australian children’s show, and you may best remember his pre-contemporary artist work from the 1986 classic Labyrinth, starring the late and great David Bowie. Ron Mueck, on view at the Museum of Fine Arts, Houston through Aug. 13, 2017, is absolutely nothing like Labyrinth.

Mueck’s move into the art world may have been considered late by some, but the care and dedication that he gives to his craft was the reason for his success as a puppeteer and is the reason for his success as an artist. Perhaps it was the exposure to the strange world of puppets that allow him to blur the line between real and surreal. Mueck’s eye for detail and the thoughtfulness with which he applies those details allow him to not only walk this tightrope but to dance on and around it, like an acrobat holding space in reality while weaving into the bizarre.

This line-blurring that Mueck handles so well correlates to the way he recognizes that the real and surreal are not necessarily separate. Human beings toy with reality fairly consistently and with an array of different tools at our disposal. Where we speak hyperbolically of moments, Mueck applies a literal representation. In A Girl, the artist has sculpted a newborn girl. The level of detail, as you might have guessed, is incredible; nothing is left to the imagination, other than the child’s backstory. The newborn lies prone on her side, eyes cracked open only slightly. This is her first moment of consciousness, a wondrous moment for any sentient being, but one that is often forgotten. Recognizing the immensity of this moment, Mueck applies his visual hyperbole by making the child herself equally immense. 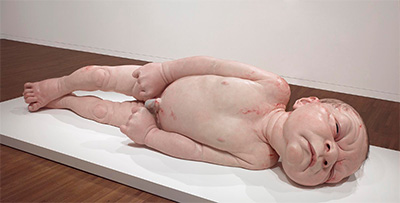 This ability to capture the emotional impact of a moment, from our perspective as well as the individuals portrayed, adds to the odd mix of real and unreal that comes into play throughout the exhibition. The sculpture Young Couple depicts a particularly awkward moment. A teen boy and girl stand in an awkward embrace. They are close physically to one another, but there’s a distance between them. The boy gazes softly down at the girl, her eyes averted. At first, the awkwardness might be attributed to young love, but something still seems…off. Moving behind the sculpture, the source is unveiled as we see the tight grip the boy has on the girl’s wrist. He may look at her with love, or what a youth may deem to be love, but he possesses her. 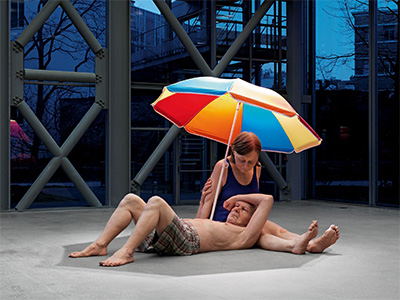 The moment of realization, the ability to empathize with these false humanoids, produces a visceral, dizzying effect that sets these sculptures apart from other works. Such sculptures are then balanced out by the works that lean further into the surreal nature of Mueck’s practice. Man in a Boat, for example, leaves much more to the imagination – albeit not in the sense that phrase is traditionally used. We quite literally see a man in a boat, but they are not scaled to one another. The man, elderly and nude, appears quite small – as though he had been scaled down to be roughly the size of an adolescent. He sits in the boat, leaning to his right, eyes squinted. He looks off, over your shoulder if need be, and into the distance. Perhaps he is on his way to some foggy afterlife.

Mueck’s interpretations of these moments strike hard, but there’s a softness that comes with them. He does not force his thoughts upon you but provides you with a framework, a prompt, for your own venture into empathy and creativity.