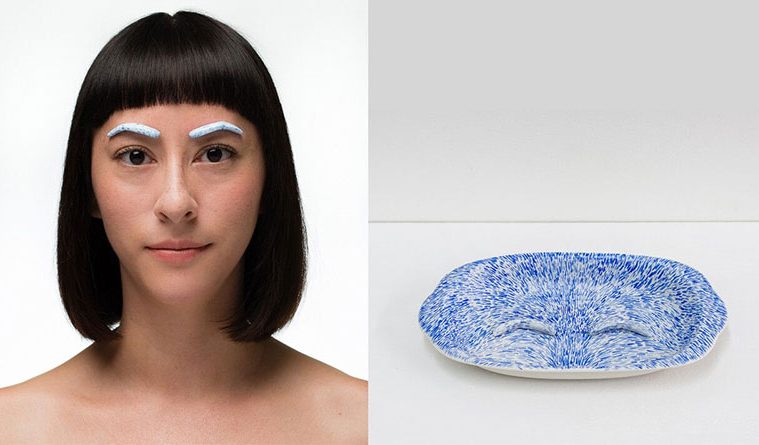 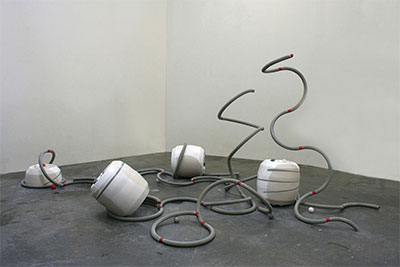 It seems as though we are in an ‘artisanal’ moment: Pickles, dinnerware, boots, you name it and someone has handcrafted it.  This is, perhaps, a natural response to the increasingly pervasive corporate ethos of faster, cheaper, bigger, and more.  However, if everything is ‘artisanal,’ how do we categorize and understand contemporary practitioners of traditional craft media? For better and worse, the boundaries between craft and what is classified as fine art have steadily been eroding and this easing of traditional borders makes up the foundation for the Houston Center For Contemporary Craft’s ninth biennial juried exhibition, CraftTexas 2016, on view through Jan. 8, 2017.

The line between sculpture and traditional craft practices is notoriously difficult to pin down and throughout the 53 works by 38 artists selected by jurors Paul Sacaridiz, Nicole Burisch, and Sandie Zilker this becomes abundantly clear. It’s the oldest synthetic material humans have created that demonstrates this premise, and that of the exhibition as a whole, best: clay. The ceramics in CraftTexas 2016 offer a lucid way to think through the range and flexibility of contemporary craft and come off as clearly one of the most elastic mediums in the exhibition. 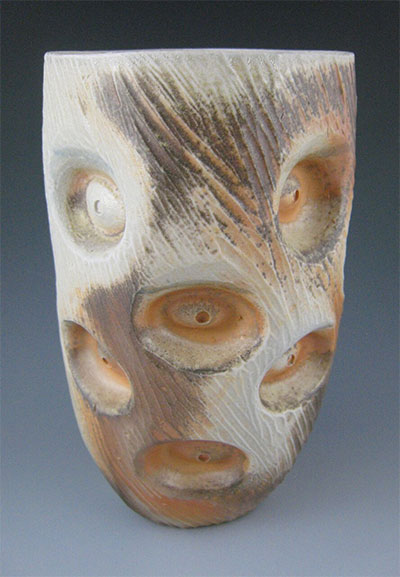 The work that pushes clay’s material specificity, questioning it, contradicting it, and even utilizing it to impersonate another, is of particular strength. Wen-Dan Lin’s small sculpture, Untitled, of a peeled tire—the sort that litter the asphalt of our highways—is magical in its subtle combination of clay with other materials. Angel Oloshove’s Activated Mandala wants nothing more than to levitate from the bulky pedestal it’s placed on. The luster of the surface, pastel color palette, and voluptuousness of form belie its material’s earthy roots. I found myself wishing that this small, meditative object was on its own in the exhibition, free of its proximity to and competition with Leslie Shershow’s elegant jewelry.

Scaling up, Brianna Deterling’s towering stoneware sculptures, Making Places: February, greet you upon entering the exhibition. Antennae-like, they taunt the fragility of their material. Where Oloshove rejects gravity, Deterling embraces it. Her repetitive forms stack, reaching and bending as they stretch from the floor. They touch, like Kamila Szczesna’s Pliable Impressions 1 & 2 on Lucy Lippard’s idea of Eccentric Abstraction; they emphasize process, materials, and organic form, to evoke the gendered body. Natasha Hovey’s sculpture, Expressed Modification, expands this idea into a series of cylindrical vessels, twisting tubes, and glossy orbs that are simultaneously organic and industrial. Detritus from a lab? Space junk? Who can say for certain? The unfamiliar is strength here as it allows the material to become secondary to the mystery of the objects. 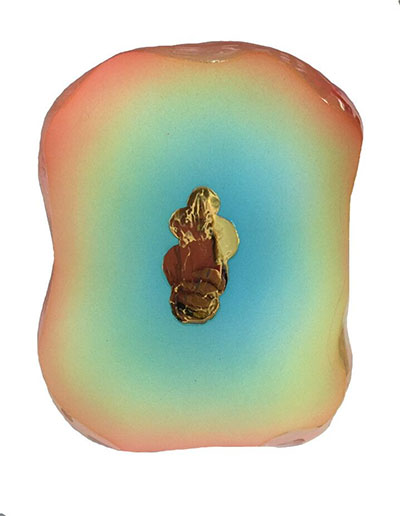 Wood-fired porcelain vases from George Bowes are more traditional yet no less engaging, and they establish yet another pole within the history and pliability of clay within the exhibition. Other porcelain works from Jennifer Datchuk and Ronald Geibel are delicate in the case of the former, and uncannily textural in that of the latter. Each play with surface, form, and bodily reference in different ways: Geibel’s by association and Datchuk’s by more explicit means.

These types of formal and conceptual connections and trajectories abound in the exhibition and cross materials and technique. What becomes clear is that the history of a given material can be used in tandem with what we typically consider conceptual art practice, formal exploration, or traditional craft production, each to exceptional result. In our rush to dissolve them, boundaries turn out to be useful, not so much as barriers but as ways of seeing and thinking about the objects contained therein. It’s their unavoidable presence that allows us to understand the place craft occupies in the contemporary world. So where is that? CraftTexas 2016 makes clear it’s a little bit of everywhere, and that fact is to craft’s great benefit.