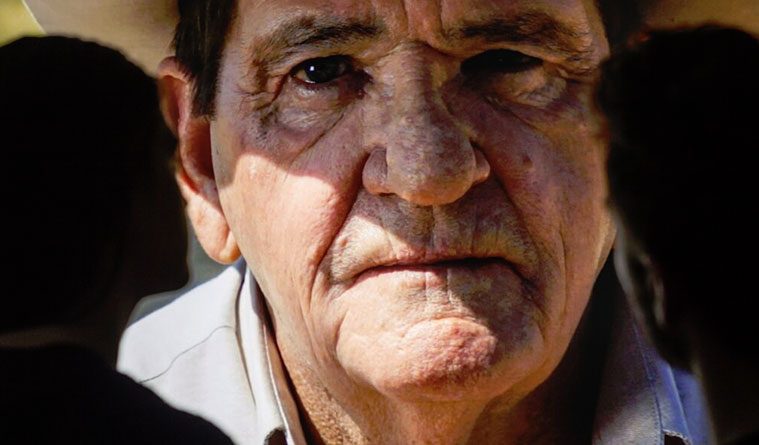 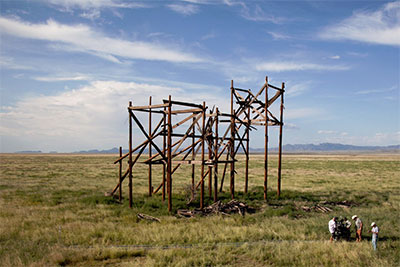 Bittersweet nostalgia anchors Sound Speed Marker from the first frame of Grand Paris Texas (2009), the first film in the video series. For artists Teresa Hubbard and Alexander Birchler, who have been collaborating together on video, photography, and sculpture work since 1990, the history of film in Texas became their primary focus during the course of this five-year project. Sound Speed Marker, a three part video installation commissioned by Ballroom Marfa, is comprised of Grand Paris Texas, Movie Mountain (Méliès), and Giant. Sound Speed Marker traveled to the Irish Museum of Modern Art after its tenure at Ballroom Marfa but has returned to Texas, specifically, Houston’s Blaffer Art Museum, through September 5.

Over the course of five years Hubbard and Birchler’s work took them through Texas towns like Paris, Sierra Blanca, and Marfa, and each time they discovered a new iteration of the same narrative: intimations of film’s influence on a city, erased by time. 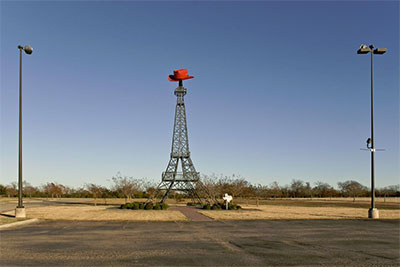 In the beginning, there was Grand Paris Texas (2009).The piece is a study of those affected by the film industry, tangentially and directly, within the Paris, Texas community. Paris, a small town of roughly 25,000 individuals, is located northeast of the Dallas-Fort Worth area and has been the recipient of a great deal of cultural fondness over the years thanks to its grandiose name and humble character. Ironically, Paris, Texas is known best for the Wim Wenders film of the same name, though the film was not shot in Paris at all.

Grand Paris Texas details the city’s slow decay in quick spurts—flashes of boarded storefronts, rusted gutters along an apartment building. This reinforcement of desolation permeates the interviews conducted by Hubbard and Birchler with Paris residents, such as the local film critic and former employees of the town’s cinematic crown jewel, the Grand Theater. The Grand stands at the heart of Grand Paris Texas. Full of birds and long abandoned, the theater represents an aspirational grandeur that never quite materialized for the town. As residents speak of their city with a deep affection, passive sadness sets in; it’s a desire to hold out hope for a town that feels like a rebirth is right around the corner despite circumstances that indicate otherwise. 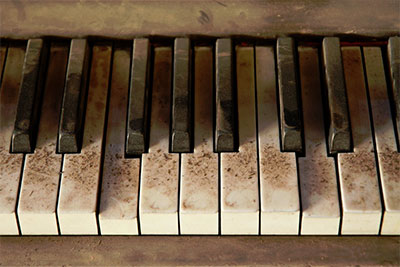 The resonant solitude of the Chihuahuan desert frames Movie Mountain (Méliès) (2011), with all its dramatic wide-open spaces and fiercely blue skies. In tone with Grand Paris Texas, Movie Mountain (Méliès) builds out the narrative of Movie Mountain, given the name after being featured in a silent film from the early 1900s, and the Sierra Blanca community that exists in its shadow. While Hubbard and Birchler also weave in the history of Gaston Méliès, the brother and business partner of the famous filmmaker George Méliès, who is believed to have filmed on the famed Movie Mountain, the stronger narrative of ranch-life’s pervasive stillness and its catalyzing effects prevails.

Movie Mountain (Méliès) addresses the transformative power of isolation on community and identity with long, subdued scenes, set out on two-screen projections. While Grand Paris Texas shows a town still expectant, Movie Mountain (Méliès) shows the Sierra Blanca community as-is. With warm recollections of the past but no naivety about the future, residents, outside of their engagements with Hubbard and Birchler, seem content to fulfill the roles of their tumbled West Texas existence, barely looking up to scan the horizon for something more. 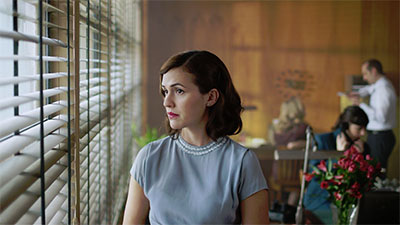 Giant (2014) is the outlier of the Sound Speed Marker series. In this film, Hubbard and Birchler gave themselves a larger scope to work within, allowing them to diverge from a sole focus on documentary-style footage of West Texas. Here, the story broadens to include an imagined scene from the Warner Brothers office in 1955, as a secretary sets out to write the location contract for the imminent release of the film Giant, starring Elizabeth Taylor, Rock Hudson, and James Dean, all juxtaposed against footage from the present-day wooden skeletons of the movie’s abandoned sets.

The film’s audio weaves through the scenes, a present force that dictates the story.  Bugs chirp in the tall grass surrounding the old Reata mansion, while typewriters clack loudly in scenes from the film studio’s office. Giant gives greater breadth to the impact of the seminal 1950s film, which was to be James Dean’s last, through two characters: the lone secretary, dreaming about the Texas desert, and the desert itself, standing resolute through the progression of time.  As clouds rumble in the distance, the mansion’s creaking beams bend and sway with the desert wind, all while our unnamed secretary swiftly types out the soon-to-be executed contract with perfectly manicured nails. The oscillation would be dizzying if Hubbard and Birchler didn’t purposefully pace Giant at an even tempo. Glamour in the 1950s, starkly contrasted with the decay left in its wake, offer viewers Hubbard and Birchler’s most honest portrayal of the film industry’s impact on West Texas. 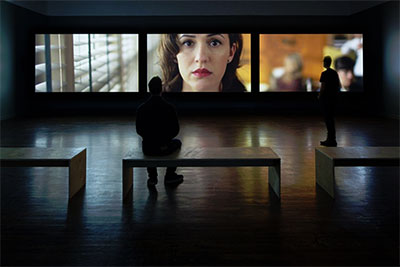 Giant delivers a portrait of Texas, past and present, with earnest melancholy and magnitude. It offers the perfect tonal note for the conclusion of Sound Speed Marker, a cap on a non-linear adventure through the film industry’s temporal affection for Texas.

While Hubbard and Birchler’s work feels invasive on occasion, bearing the mark of individuals outside of the community looking to cast a magnifying glass inwards, their landscape footage is absolutely captivating. For fans of West Texas, it is impossible not  to ache for the still quiet that defines the far reaches of our state. For those unfamiliar with the Texas desert, Sound Speed Marker remains a study in the people and landmarks that contribute to the growing legacy of the American West, both within and outside, of the film industry.