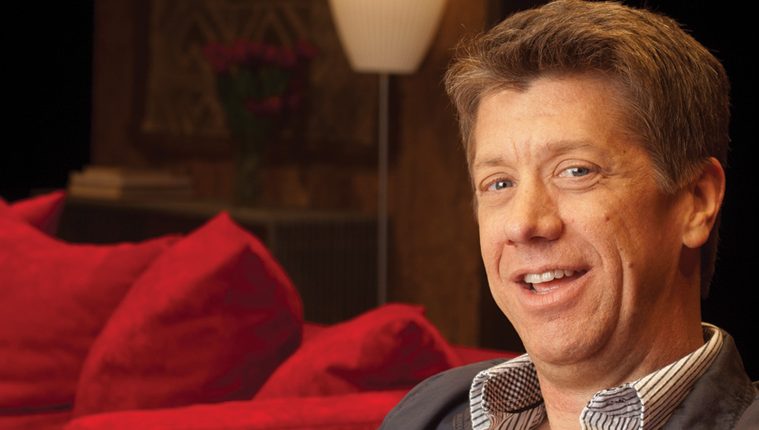 Merrily He Rolls Along

If you’ve been a local theatergoer in the past 15 years or so, there you already know that Joel Ferrell is one of the most skilled directors in North Texas. He was artistic director of Fort Worth’s Casa Mañana in the late ‘90s, where he consistently brought a fresh approach to warhorse musicals. He’s now doing that at Dallas Theater Center, too, where he was recently promoted from Artistic Associate to Associate Artistic Director, second to Artistic Director Kevin Moriarty.

His current production of “God of Carnage” at Dallas Theater Center proves that he’s as adept at directing plays as he is musicals. In recent years at DTC, he’s directed the acclaimed productions of Horton Foote’s “Dividing the Estate” and the musical “Cabaret,” and has helmed the yearly staging of “A Christmas Carol” for years. Next up, he’s directing “Joseph and the Amazing Technicolor Dreamcoat,” which closes DTC’s 2011-’12 season.

Count on seeing more from the son of a liberal Methodist minister and elementary school teacher, and brother of an author, Jeff Ferrell, a criminologist who has written books about graffiti art and dumpster diving. Born in Waco, raised in Fort Worth and educated at the University of Texas in Austin, Joel Ferrell now lives in Oak Cliff.

Mark Lowry, editor of our media partner TheaterJones.com, chatted with Ferrell about the new job and having an artistic home.

Arts+Culture: You’ve worked full-time at DTC for three years now, your first full-time theater job since Casa Mañana more than a decade ago. Did you think you’d have the opportunity again?

Joel Ferrell: I’ve always wanted to be rooted in an organization. … It’s what I’ve said for years. If somebody could give me more assurance of having work most of the year, I could commit to staying here and being just an artist. That’s what I kept looking for, making trade-outs in my own career. So few artists have an artistic home, where you know the sinew and fiber of the place, the board members know you, and you celebrate with those theaters the fact that it is recurring people who make up the fabric of it.

A+C: What does being promoted to Associate Artistic Director mean, on paper?

JF: The job title for me was as much about clarification as anything. As my three years had evolved, it was basically the job I was doing. Clearly Kevin is driving the decision making about the aesthetic of the theater. He’s the driving force behind picking seasons, the driving force at looking at significant collaborations. Once those get set in motion, the day-to-day stuff gets passed to me.

I love the creativity of not only having the opportunity to direct, my real passion, but also be a part of the creativity of helping that organization be healthy and move forward. I’m exhausted all the time, but I’m also always thinking these will be the years I’ll look back on and say “we did something.” There’s no day I’m involved with the Dallas Theater Center that I’m not absolutely certain that we are busting ass trying to make great things happen.

A+C: How did spending your 20s in New York affect your career as a theater artist?

GOD OF CARNAGE runs through June 17 at the Kalita Humphreys Theater.

JF:I started as an altogether theater kid; dance I didn’t discover until 13 or 14, but well before that I knew I was going to be an actor. In high school [Eastern Hills High School in Fort Worth], everything I was working on was Shakespeare and the classics. When I first got to New York, I spent all of my spare pennies going to see plays. Those where years when Royal Shakespeare Company and Steppenwolf were bringing their stuff to the City. John Malkovich was getting big. I saw Uta Hagen in [Shaw’s] “Ms. Warren’s Profession.” … My vivid memories were of plays. I was seeing the more typical revival productions, and the stuff growing out of company work.

A+C: You’re known best for musicals, but have directed acclaimed productions of plays like “Who’s Afraid of Virginia Woolf?” at Stage West and “Dividing the Estate” at Dallas Theater Center. How did they decide on you directing “God of Carnage”?

JF: We sat down and Kevin asked me what I wanted to direct, without thinking of any practicalities in the season. I picked “God of Carnage” because honestly I rarely get to do the rowdy things, which is what I’m drawn to. Kevin said “let’s make that happen.” Next season I’m directing “Red,” which I’m excited about.

Honestly, I love doing musicals, and I’ll always love doing musicals, but the art of musicals in a lot of ways is being able to manage the scope and size of them. You have a pit full of musicians, a huge crew, major design elements, a ton of people, and you’ve got to rehearse all that in a really smart and efficient way, you have to divide and conquer. So anytime the works is about a ton of research, and get in a rehearsal studio for two or three or four actors and make it come to pass based on what works for those actors, but staying completely involved with the story we’re telling, it’s such a thrill. Directing something like “Red” or “God of Carnage” is like driving a really cool speed boat, and directing a musical is like being a captain of a giant cruise ship.

A+C: How are you approaching “Joseph and the Amazing Technicolor Dreamcoat”?

JF: The thing about “Joseph,” and I’ll include “Godspell” in this ? although that’s not entirely fair to either of them because they’re very different pieces ? is that what was fun about them when they first hit is that they made you hear the story in a new way. And the difficulty 30 years down the road is that everybody knows those. So why do we keep doing them in the same way?

For me, a lot of it is just trying to get an audience to see and hear it in a different way. To that end, I don’t think I’m doing anything crazy-radical, but I am shaking it up a bit. I don’t understand revivals of things that are not relevant because everybody has done it and seen it and it’s almost the cuddly adorable old-fashioned way to do it. The Theater Center allows me to do is find a super-fresh approach to take.

A+C: And that’s one of the reasons you feel you’re in a good place in your life and career at Dallas Theater Center?

JF: There’s a theologian named Frederick Buechner, and he basically said that a vocation is where your skills and the world’s need meet. I feel like this is absolutely as close as I’ve gotten in my life to where my strengths and the need for them intersect so well.