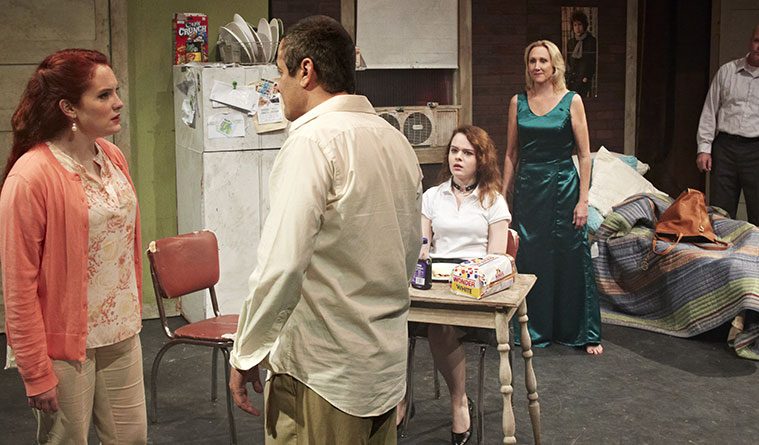 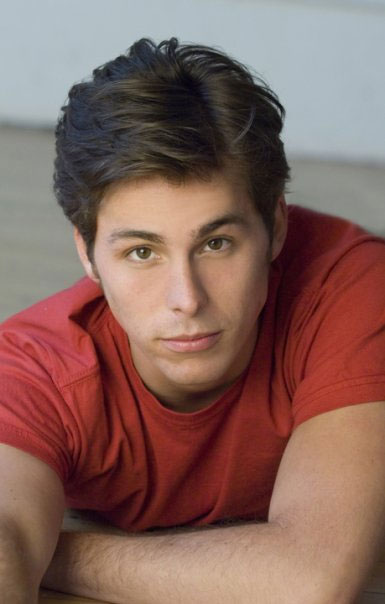 Stark Naked Theatre closes its season with Sarah Ruhl’s Stages Kiss, May 28 – June 20, directed by Brandon Weinbrenner, resident assistant director at the Alley Theatre. A + C editor in chief Nancy Wozny visited with Weinbrenner to get the the lay of Ruhl land.

Texas has an ongoing love affair with Sarah Ruhl. Even the Alley went through a Ruhl stage, with Clean House  and Eurydice. What’s your take on the Ruhl canon in Texas?

Why would a theater not want to produce Sarah Ruhl’s work?  Her plays are so full of vitality, whimsy, and creativity that not only do audiences love them but directors love to work on them. Better yet, they are so rooted in fully realized characters that actors jump at the chance to portray them. She tackles Greek myth with Eurydice, the digital age’s complexity in Dead Man’s Cell Phone, the early history of the vibrator in In the Next Room, and an actor’s true hormones while kissing under the guise of a character in Stage Kiss. There’s a lot of variance in her work, so I’m not surprised many Texas theaters have been able to appeal to their audiences by produce one of Ruhl’s many terrific plays.

Thinking about the body of Ruhl’s work, which has more than the usual amount of magical realism happening on today’s stages, where would you say Stage Kiss  fits into her oeuvre?

While Stage Kiss lives in a more recognizably modern world than the majority of Ruhl’s plays, it still has its share of magical realism. Ruhl says “everyone has a great, horrible opera inside of him,” and that’s where each and every character in Stage Kiss lives. They choose the most dramatic and romantic option at every turn… after all, it’s a play about actors! And Ruhl has dedicated this play to every actor she has ever worked with. We are all fascinated by what lies beneath the surface, the underpinnings of what is in front of us.  Behind every good production is a backstage as bristling with drama and suspense as what is happening onstage. Stage Kiss  gives us a relationship unfolding like a play—we see the audition, the first rehearsal, the tech rehearsal, the performance, and the reviews. The characters are as affected by the process as the audience, so it’s a kind of even reveal for us, we feel in on the joke. What an exciting place for a play to live! 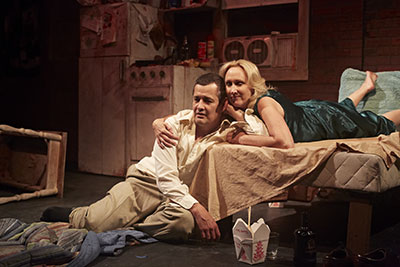 How did you come to direct Stage Kiss for Stark Naked?

I met Philip and Kim of Stark Naked my first week living in Houston.  In our first conversation together, we discussed the tools and training most useful to actors on today’s stage. Needless to say, we didn’t agree on everything, but one thing was clear, we respected each other as contemporaries.  I think an immediate trust was formed that we were all artists still thinking about and honing their craft. Kim and Philip are Houston theater stalwarts, yet have always been open to my fresh eyes and new voice. I approached Kim at an Arts + Culture happy hour about directing a Will Eno script that I loved.  At the time, she couldn’t guarantee me anything, but I was persistent.

Really? I knew there was a reason for our A + C Happy Hours! Carry on.

When the Alley announced its season offsite at UH, there was a two month period where we were bringing in outside productions, so my scheduled freed up. The first company I contacted was Stark Naked. While we decided not to do an Eno piece, Kim asked me about my interest in Stage Kiss.  I had never read the piece, but as soon as I finished it, I knew it was a great choice for me. I’ve always considered my strength to be contemporary comedy, and Stage Kiss fit the bill.

This is a play about the theater. Wait a minute, the last play you directed, Venus in Fur (which was fabulous), was not only also about the theater, but about sexual dynamics, which certainly plays out big time in Stage Kiss.

I recognize the irony in that the two plays that I have directed in Houston center on actresses in auditions and rehearsal. But Venus in Fur and Stage Kiss are two very different plays. Stage Kiss is about the expansiveness of human emotion and the capacity to love, Venus in Fur  is about larger-than-life powers that extended beyond the mortal world. While the world of the theatre is very present in both, and one that I am all too familiar with, they serve as backdrops and/or catalysts for the action of the characters. Clearly an astute knowledge of this world is helpful when directing. And hey, it’s fun. If nothing else, I can chuckle to myself when the plays strike a chord that resonates from past experiences. 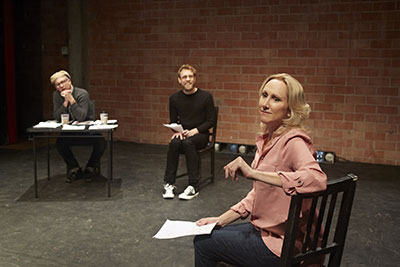 Bring us into your directorial swagger.

I am still very much a director that is developing his own voice. I know my strengths and my weakness, the scripts that I’m attracted to, and the type of actors I work best with. Being at the Alley, I have been exposed to some really excellent and successful directors, so the bar I aim to touch is set very high. I’m still learning, but I can feel my voice maturing more and more every day. Right now, I’d hesitate to label myself as any specific type of director. But I know I love collaboration.  Actors, designers, the crew—they all inspire me.

You have been here for about two years or so and have been quoted, right here in A + C’s pages, as saying that the Dallas theater culture has a bit more differentiation than Houston. Do you still feel that way? 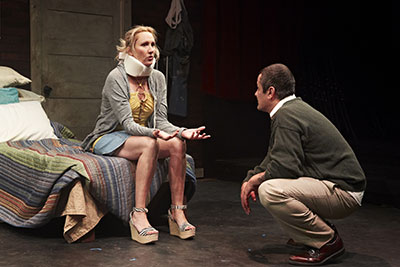 What are you most excited about that’s coming your way at the Alley or elsewhere?

Next year the Alley is rolling out its own New Play program, Alley All New. I will be a major player in the execution of this program, and I look forward to working with our incoming Director of New Work and our Artistic Director in fully realizing this giant leap forward for the Alley. The Alley will foster young and upcoming playwrights and directors, and we can learn from them as much as they can learn from the Alley.