Where shall we begin?

This query becomes both a practical question when exploring the recently-unveiled Nancy and Rich Kinder Building at the Museum of Fine Arts, Houston, and a way of contemplating the Kinder’s impact on the landscape of the museum campus, the city of Houston and even the international art world.

Perhaps we should start with the fundamentals: the concrete and steel skeleton wrapped in an arced glass, half-tubular skin. Designed by Steven Holl Architects, the white, three-story structure occupies 237,213 square feet and finally gives a showcasing home to the MFAH’s vast collection of modern and contemporary art.

Or we could begin with the fiscal: While 2020 has been one of the worst years in recent memory for art institutions around the world, thanks in great part to Susan and Fayez S. Sarofim and Nancy and Rich Kinder, MFAH opened its new building with no debt—the culmination of the $470 million raised in a capital campaign that started in 2012.

But to begin in person during this COVID-era of timed-ticketing and temperature checks, we’ll enter from the main entrance on Main Street. From outside, we can contemplate this odd apparition, simultaneously angular and gently rounded, a kind of puzzle piece at ground level and boxy cloud on the horizon when viewed from afar or above.

To reach the entrance we’ll see the first of many signs that modern and contemporary artistic spirit infuses all aspects of the Kinder. Instead of some classic fountain, we’ll find artist Cristina Iglesias’s Inner Landscape, as if a rocky tidal pool just erupted one morning on the corner of Main Street and Binz. The title of this 50-foot bronze and water artwork also hints at the world inside and beneath the Kinder Building and the whole Sarofim Campus.

Not-so-secret entrances to the exhibition space abound, including a tunnel from the Caroline Wiess Law Building awash in greens, blues and pinks from Carlos Cruz-Diez’s light work Cromosaturación MFAH. Another tunnel joins the Kinder to the Glassell School of Art, its walkway saturated in yellows and grays from the geometric lanterns of Ólafur Elíasson’s Sometimes an underground movement is an illuminated bridge. And here be dragons guarding the gateway between underground spaces—or at least one dragon, Ai Weiwei’s Dragon Reflection, quite at home in its new lair.

Together with the James Turrell The Light Inside passageway between the Audrey Jones Beck Building and Law Building, the tunnels become something like a root system joining the three main buildings together and figuratively anchoring them in Houston’s sense of art identity.

Yet to understand the Kinder Building’s place in Houston historical landscape do we need to remember the dawn of the MFAH? Do the roots come from the seed of the founding of the Public School Art League in 1900 and as Richard D. Kinder, Chairman of the Board of Trustees, reminded in a media preview, which was “overwhelmingly populated by women.”

Or should we begin our wanderings into the past with the opening of the Audrey Jones Beck Building in 2000, which, as MFAH director Gary Tinterow explained during the same preview, was thought at the time to have fulfilled the museum’s exhibition needs for a generation. Only a decade later it would become apparent the ever-expanding collection needed much more space.

Once we enter the Kinder, we find light flowing throughout the space. In a video interview with architect Steven Holl, he speaks of the Texas sky and clouds as inspiration for the design. Now, standing in the atrium looking up into the sunlight-drenched white swoops and gentle arcs of stairs, upper floors and ceiling, it does feel like we’re 30,000 ft above Houston hovering within a cloud field.

Above the main atrium stairway hangs Alexander Calder’s International Mobile floating both as a masterpiece of modernity and a reason to glance back in time. According to Tinterow, Calder originally created the piece in 1949 for the Philadelphia Museum of Art, but they didn’t acquire it. In the 1960s, MFAH director James Johnson Sweeney bought it for the MFAH and its one exhibition building. Tinterow asserts even in the grandeur of Cullinan Hall “one never had the perspective that one can gain here, by having three views from three floors of the spectacular work.”

Though the stairway calls us upward, we might spend hours just wandering through the large-scale works on the first floor. Expansive pieces that need half a gallery to unfurl like Tunga’s Lezart I or immersive works which require black-box spaces such as Gyula Kosice’s Hydrospatial City and Turrell’s Caper, Salmon to White: Wedgework, in the past were seldom seen but for special exhibitions. 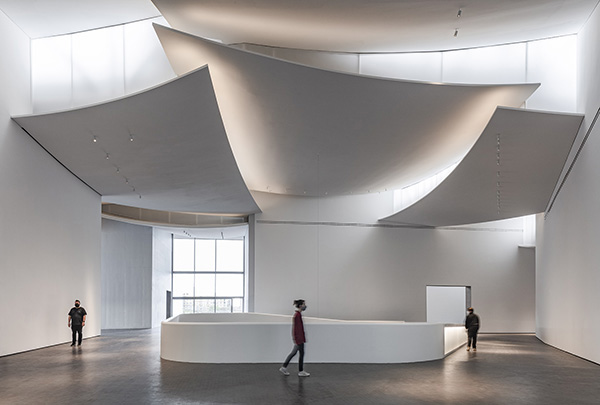 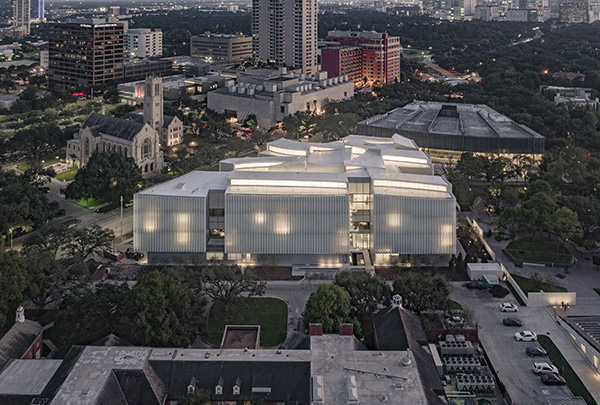 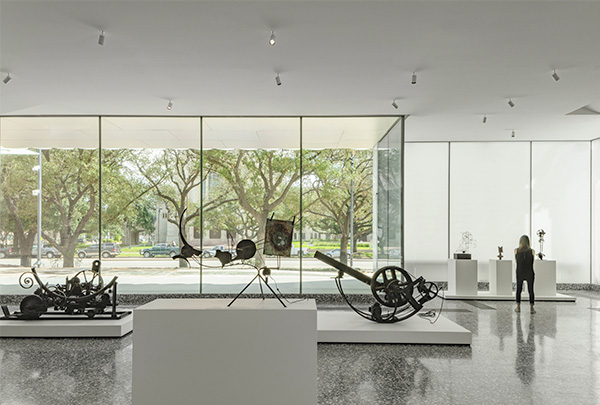 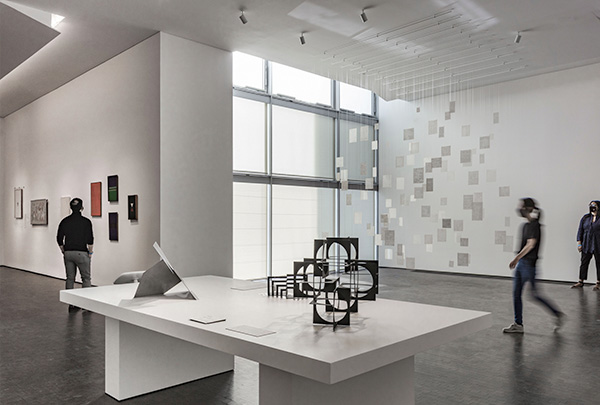 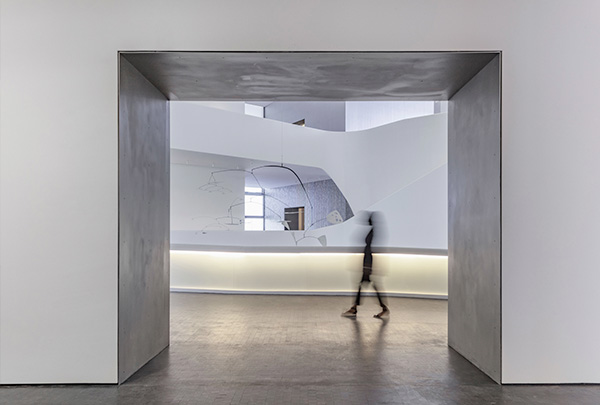 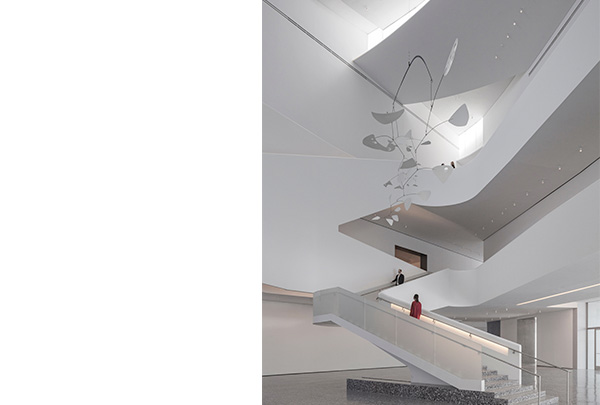 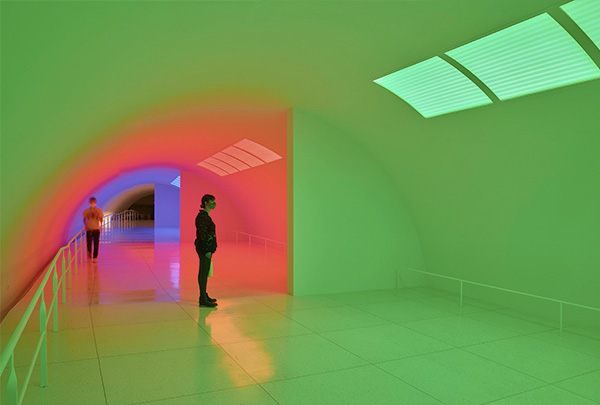 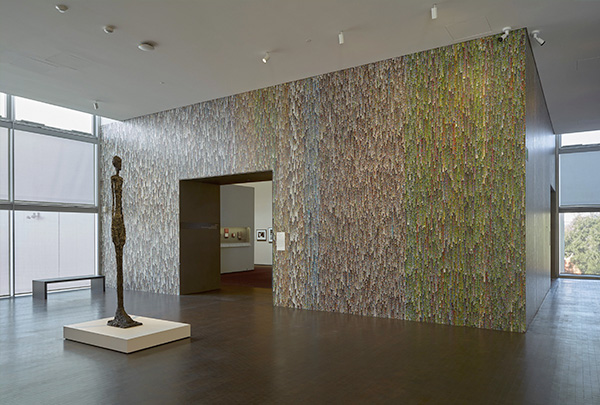 Installation view of Jason Salavon’s Little Infinity, 2020 with Alberto Giacometti’s Grande femme debout I (Large standing woman I), 1960 in the foreground.  Photo by Thomas Dubrock, courtesy of the Museum of Fine Arts, Houston.

The second floor gives several of the curatorial departments room to roam through art eras, movements and across continents. Modern and contemporary art, Latin American and Latino art, photography, decorative arts, craft and design, prints and drawings all have galleries to illustrate the depth and breadth of the MFAH’s collections. Here too, many of these works, until now rarely seen together, offer fascinating new insight on modernism and contemporary art. The MFAH’s foremost collection of Latin American art now on permanent view might even change our conceptions of modern and contemporary art.

Tinterow explains that while the galleries certainly highlight the influence of the traditional Paris-Berlin-New York modern art nexus, the works taken together also show the movements’ ramifications throughout the Americas.

“Unlike any museum in this hemisphere, we can show the development of Modernism in Brazil, in Uruguay in Argentina in Venezuela and there’s no other museum on the planet that can tell that story in such depth and with such important works of art,” says Tinterow.

The photography galleries become another example of how given a permanent space these works—some created at the dawn of the medium, others about 20 seconds ago—can offer not only an encyclopedic understanding of an art form but also a glimpse into our evolving consciousness. We gaze upon 19th-century photographs like Gustave Le Gray’s landscape Mediterranean Sea at Sète and Julia Margaret Cameron’s portrait Rosalba; But to find them, we walk through Jason Salavon’s Little Infinity, a massive photomural commissioned for the Kinder, consisting of 14 million images taken from ImageNet, a photo depository used for machine learning. Together the works offer a picture of who we were and who we are becoming.

If the second floor gives the departments space to showcase collections, the third floor’s thematic spaces gives curators permission to play. With galleries dedicated to motifs and themes like Line into Space, Color into Light, Border, Mapping, Witness, Collectivity and LOL, the placement allows the artwork to resonate with each other across time and space. 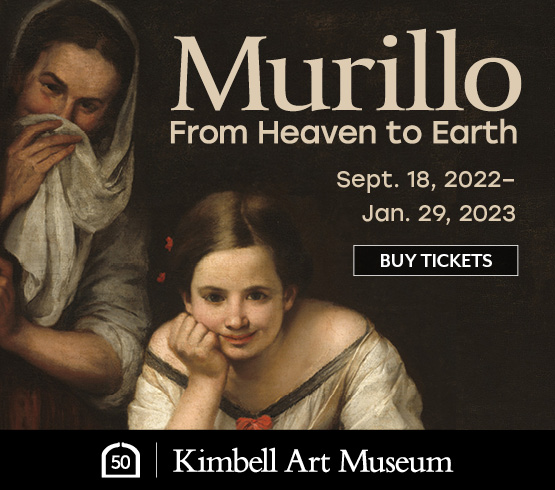 No matter which floor or gallery from Latin American to Modern to LOL, from Matisse and Magritte to Monkey Selfie, we feel an exhilarating sense of both discovery of the new and the recognition of the familiar, a constant seesaw between ”Wow, what is this?” and “I remember you.” With the extraordinary number of Latin America-focused exhibitions the MFAH has presented and many times organized over the last decade, encountering some of the works like Temporary Storage from Camilo Ontiveros, Amalia Mesa-Bains’s Transparent Migrations and Broadway from Miguel Ángel Rojas feels like recognizing someone we were introduced to once in passing only to now have plenty of time and a place to get to know them better.

So perhaps this is where we should both begin and end, at home: For the Kinder becomes the solution to a problem of art riches. Since the opening of the Beck Building, the MFAH has continued to add to its permanent collection, thanks in great part to Alfred Glassell Jr. and Caroline Weiss Law, who Tinterow describes as “two of the greatest philanthropists in the history of the museum.” Their bequests gave the museum one of the largest endowments and sources of acquisition funds for modern and contemporary art in the U.S and probably the world. We have seen many of those acquisitions over the decades, along the walls and galleries of the Beck and Law buildings, in tunnel hallways to the parking garage and within temporary exhibitions, but the art seldom had permanent spots to call home. Meanwhile, we never had one place to go, so we could wander, stand and contemplate this art.

“Houston has not traditionally been a tourist destination, unlike the east and west coast cities with great museums. Some 92% of our visitors are local,” says Tinterow. “So this investment by the local community for its own citizens, for its neighbors and friends, is a truly remarkable achievement and I would say almost unparalleled in modern times,” adding that in the Kinder “We try to show a global vision which reflects the global status of Houston as an international capital and as a port city which for more than a century has welcomed people from all over the world.”

And now under a big Texas sky with years of possibility, we shall begin our art discovery again and again, at home.