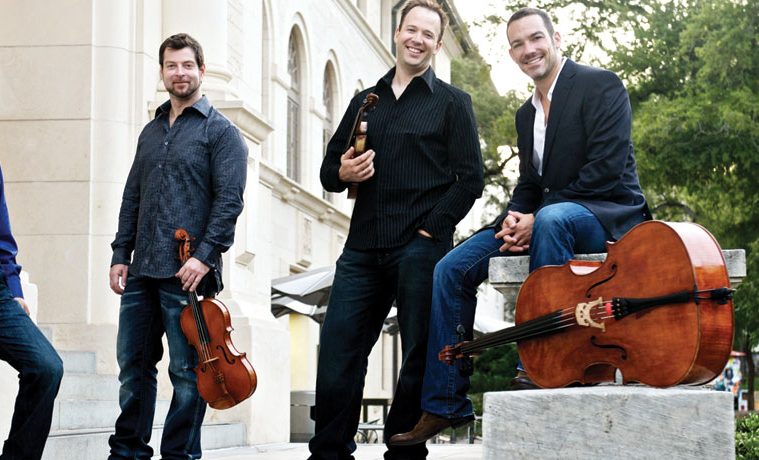 When violinist William Fedkenheuer steps onto the stage this month with his colleagues in the Austin-based Miró Quartet for a series of six concerts at the Butler School of Music at UT-Austin (Sept. 6-8 & 27-29), he will achieve a distinction that few other professionals can claim. He will be one of the few living violinists who have performed all sixteen of Ludwig van Beethoven’s string quartets for two violins, viola and cello as both a first and second violinist.

Surprisingly, a complete Beethoven cycle is not the only thing on the Miró’s agenda for the month. In a deliciously unexpected move, the venerable Houston Friends of Chamber Music have chosen this relatively young ensemble to open their season on Sept. 17 with a mixed program of Schubert, Beethoven and Philip Glass.

Fedkenheuer, an alumnus of Rice University’s Shepherd School of Music, is excited to be returning to Houston. “Actually, during the four years I was at the Shepherd School, I was the house manager for the Houston Friends of Chamber Music,” he explains. “I look back at those years as some of the most special times in my life.”

Founded in 1995 by four students at the Oberlin Conservatory, the Miró Quartet has been in residence at the Butler School of Music at the University of Texas at Austin for the past ten years and tours extensively throughout America and Europe. Two other Texas recitals are scheduled for the Fall as well: The quartet joins legendary pianist Menahem Pressler on Oct.18 for a recital in Austin presented by Texas Performing Arts, and they will also present a recital in Ft. Worth on Oct. 19 for the Chamber Music Society of Ft. Worth.

In his string quartets – a collection of 17 pieces, written over the course of his career, that comprise some nine hours worth of music – Ludwig van Beethoven created some of his most intimate, beautiful and demanding music. To learn them is a mammoth undertaking, and to perform them—particularly in back-to-back concerts—is a milestone that only the bravest and best of string quartets achieve.

“My first time was a total blur,” Fedkenheuer says, recalling his first trip up the proverbial Mt. Everest of string quartet playing as the second violinist in the Borromeo Quartet. “There is a certain survival aspect to the first time you do it. You don’t just climb Everest. You train, you build a base camp. You have to build your stamina.”

Fedkenheuer returns to the role of second violin this month with his colleagues in the Miró Quartet for what is perhaps his fourth or fifth trek up the mountain; he has also made the trip as the first violinist with the Fry Street Quartet.

“For players and audience alike, a complete Beethoven cycle is one of the most incredible experiences. When you are able to engage with these string quartets of Beethoven, over a set time period, you hear them in a way that you would not be able to otherwise,” Fedkenheuer says. “You start to get to know the man himself in a way that you can only know through hearing these pieces.”

The ensemble has also just finished recording the three “Razumovsky Quartets”, which are named for the 19th Century Count who was the Russian Ambassador to Vienna and who commissioned the works, and plans are in place to record the final seven quartets in the series over the next few years. Their recording of the first six in the set, the “Early Quartets”, has already been available for several years and was recorded with the group’s previous second violinist, Sandy Yamamoto.

“What I love is that the engagement from the audience only gets deeper the farther into the cycle you get,” says Fedkenheuer. ”

And that is so meaningful to an audience and to the performers and to the relationship we have with them.”