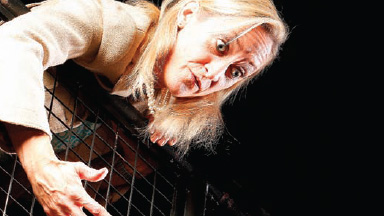 Playwright Allison Moore likes to write about how the cookie crumbles, search or in the case of her newest play “Collapse, ailment ” opening February 3 at Dallas’ Kitchen Dog Theater, treat how a bridge’s collapse reflects humanity’s inner turmoil. She finds life’s absurdities, and human attempts to avoid or cope with them, fascinating. But she doesn’t consider herself an absurdist playwright. She writes comedies underscored by moral dilemma and internal conflict; both can get pretty preposterous. She thrives on the challenge of portraying the taut balance between the laughter above and the aching below daily existence. Life is full of absurdity and incongruity. How humans try to make sense of it all (or avoid the attempt) provides premium dramatic material.

Moore’s plays of emotional exploration inspire high artist and audience satisfaction. Described in professional bios as “a displaced Texan based in Minneapolis,” Moore and her work have earned recognition and production at nationally distinguished playhouses, including the Guthrie Theater, Actors Theatre of Louisville, Marin Theatre Company, The Lincoln Center Director’s Lab, and The Playwrights Center. She is a two-time Playwrights’ Center Jerome Fellow, two-time McKnight Fellow, and Bush Artists Fellow. “Collapse” emerged from the Global Age Project, the annual new play festival held by Berkeley’s Aurora Theatre, where the inaugural production was championed by the San Francisco Examiner as “incisive and very funny… (a) comedy for the new Age of Anxiety.”

Kitchen Dog Theater’s production is the third leg of a fully-funded rolling world premiere of the play through the National New Play Network, in conjunction with the Aurora Theatre’s and Denver-based Curious Theater’s productions. Arts writer Alexandra Bonifield recently contacted the congenial, expressive Moore at her Minneapolis home via phone.

A+C: How did you get your start as a playwright?

MOORE: I intended to be an actor. When I enrolled at Dallas’ SMU as an undergraduate, I chose a dual major option on a whim and found myself writing scripts. My experience there, studying with Bill Lengfelder and Dale Moffitt, was invaluable. I learned what makes action “playable” in a script, how to create characters that always “want something.” My teachers and drama school colleagues taught me a respect for the actor’s challenges and process that energizes everything I write.

A+C:  How do you get ideas for plays?

MOORE:  Some event, often a news item, catches my attention and gets under my skin. I start to dig around for information, research the problem or event to see what turns up. Sometimes I mull a play idea over for several years, looking at its moral implications and dilemmas, seeking the best way into them. Is the story stage-worthy? I “noodle” lots on the computer.

MOORE:  We live in Minneapolis. The bridge that collapsed in 2007 was an eight-lane section of Interstate 35W that carried 150,000 cars across the river every day. My husband and I drove that bridge all the time. He was on his way to work as the bridge fell but chose to take the 10th Avenue Bridge instead of 35W that day. It killed 13 people and injured 145, a huge tragedy. Then when this major highway artery was shut down for over a year while they were building the new bridge, it impacted the daily lives of pretty much everyone in Minneapolis. I found a series of video interviews with survivors that were recorded for the August 2008 anniversary of the collapse. The survivors’ stories really affected me — from the harrowing to the hilarious, all poignant. Then when the economic collapse hit in October 2008, I recognized the parallels between these two different kinds of disasters, how they affected people’s lives and relationships. It seemed like an amazing congruence to turn into a play. “Bridges aren’t supposed to fall down; banks aren’t supposed to fail.”

A+C:  Your relationship locally with Kitchen Dog Theater goes back many years, and the company is a founding member of the National New Play Network. How do they work together, and how have your relationships with both helped you as a playwright?

MOORE:  I always feel like I’m coming home when I’m working with Kitchen Dog. We go back together to SMU days, the early 90s. They are an amazing group of professionals, totally dedicated to their art. Every element of their productions of “End Times” or “Slasher” felt integrated harmoniously, from the actors and directors to the designers and prop artists.

Kitchen Dog actually introduced me to the National New Play Network. It’s a working network of 26 theater companies across the United States that support one another like a huge extended family. Each one is committed to producing new stage work and finding new playwrights to support and share with other companies with similar venues or audience demographics or subject and style focus. It’s been fascinating to watch the different treatments “Collapse” has been given by the other NNPN producers in this rolling premiere, equally valid and appropriate to their different artistic visions and audiences. One company focused on the serious underlying issues and had to make space for its comic tone and timing. The other played it as a straight-ahead comedy and had to make sure to stay emotionally grounded. It will be fascinating to see where Kitchen Dog takes the play. There is so much personal and artistic resonance for me here. Amazing Director Chris Carlos, cast member Leah Spillman graduated from SMU with me, and cast member Bill Lengfelder was our professor back then.

A+C:  What advice can you offer aspiring playwrights?

MOORE:  Do it!  Be open to rewrite and attuned to reactions from artists and audiences. Theater takes place in community; reach out to yours. Read and see everything you can, the classics like Pinter and Shakespeare, newer writers like Carlos Murillo and Kirsten Greenidge.

A+C:  Are there any messages in “Collapse?”

MOORE:  Consider how we maintain hope in our difficult, anxiety-ridden, challenging world. How do we cope with fears, some irrational, some real? Where can we cultivate humor, passion and love in our lives?