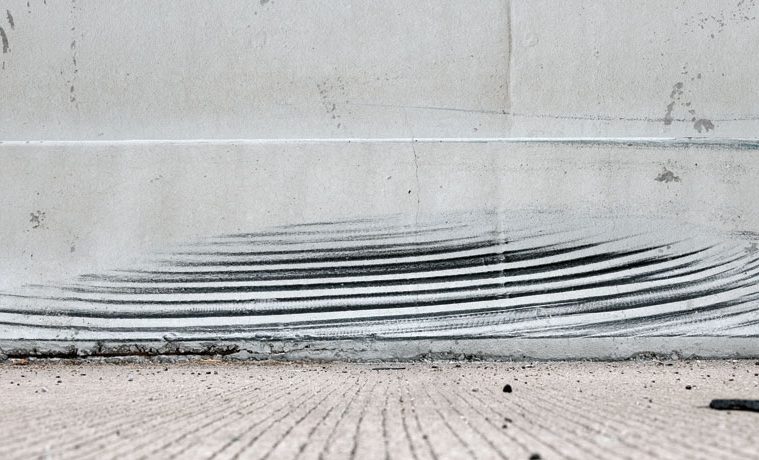 HOUSTON—Lots of soul searching has been done around questions of it means to be a photographer – or an artist whose practice includes photography – in an image-saturated era when few people are ever without a camera close at hand.

But those questions seem remote when you’re standing in front of Dallas artist Jesse Morgan Barnett’s photographs of scrapes left by cars on roadside guardrails that somehow evoke the stillness and grandeur of landscape and the speed and grandeur of mid-20th century abstract expressionism. (They also call to mind the photographs of such Ab Ex contemporaries as Aaron Siskind.) Practically everyone has the means to take these straightforwardly shot pictures, buy but Barnett has the eye and the poetic sensibility.

The pictures in Barnett’s To Accident and Abandon Such Customary Writings series are emblematic of the tension suggested in the title of the FotoFest-Houston Center for Photography joint exhibition, Moving/Still: Recent Photography by Texas Artists, the fifth iteration of the organizations’ collaborative series Talent in Texas.

Without aiming for a theme, guest curator Kerry Inman nevertheless gravitated toward photos with conceptual, performative or documentary tendencies; often the works straddle two or more categories at once. Built environments and landscape interventions figure heavily in most of the artists’ work, and nearly all the photographs were shot outdoors.

Even more democratic than Barnett’s photos, yet remarkable nonetheless, are Dallas artist Paho Mann’s bone-dry pictures of dollar stores, check-cashing shops and mini-marts. The series’ title, Re-inhabited Circle Ks, reveals what these mom-and-pop shops, which also include a tattoo club and tuxedo-rental shop, have in common:  they’re the new occupants of buildings abandoned by the chain store in the 1980s and 90s after a new corporate plan dictated relocating to more profitable corner lots.

“These buildings do not show a linear progression of the corporatization and homogenization of suburbia, but rather serve as evidence of a more circular system – a system driven by a delicate negotiation between same and different, between complicated sets of actions and choices that shape our built environment,” Mann writes on his website, pahomann.com.

Indeed, the change seems heartening when you realize how homogenous these nearly identical structures were before their new owners painted, redid the signage and added their own bells and whistles.  Reminiscent of Ed Ruscha’s highly influential photographs of vernacular architecture and his Course of Empire paintings (1992/2005) wryly “documenting” the transformations of imaginary buildings, Mann’s Re-inhabited Circle Ks tell a soft-spoken story of suburban diversification.

Mann’s photos were shot in the Phoenix area, where there was once a Circle K on just about every block. Other far-flung locations in this Talent in Texas show reflect art-making’s increasingly migratory character, such as rural Maine — see Keliy Anderson-Staley’s fascinating Off the Grid series depicting the homes of families living without plumbing or electricity — and Venezuela, where Miguel Amat shot his hauntingly ambiguous large-format photographs of dams used not just to generate electricity to “contain” the leisure activities of low- and middle-income local tourists who lack international travel options.

The staged photography generally doesn’t hold up as well. With their lo-fi Pictorialism, Megan Badger’s manipulated, scratched-up pictures of a ritual conducted in the rain and mud feel contrived—the physical interventions, mannered.  Hector Hernandez’s Hyperbeast series, in which a plucky dancer drapes a presumably fan-blown piece of monochrome fabric over his body, leaving only his legs, which are clad in tights of a different color, visible as he moves through abandoned building interiors, aims for a tension that it doesn’t quite strike.

Still, there are many more hits than misses, and you can tell Inman had fun choosing work from a wide range of Texas artists without worrying about whether it was right for Inman Gallery, her commercial Midtown space. HCP closes its half of the show Nov. 3; on Nov. 8, the entire show reopens at FotoFest, where it will remain on view through Dec. 7.