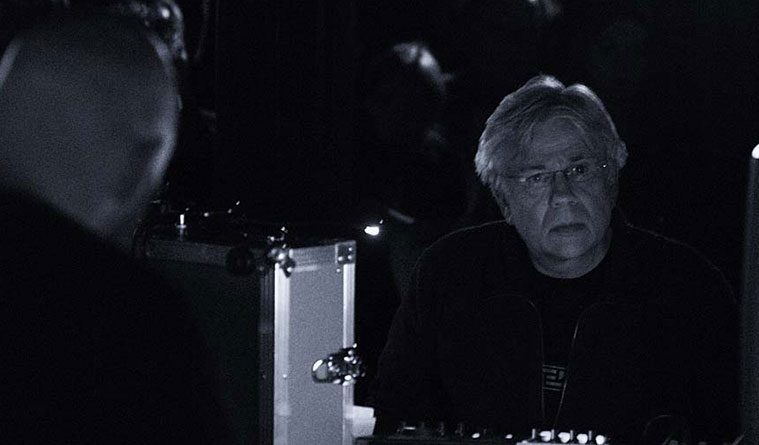 Note: For technical reasons, the Norwegian character (o-slash) in Kjell Bjorgeengen’s name has been replaced with “o”. 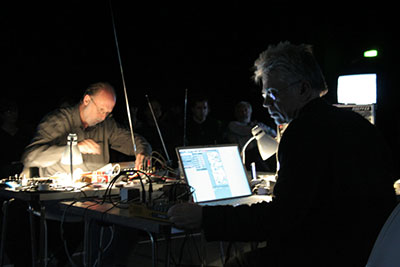 For the longest time, the only way I could describe the music of Gianto Scelsi was, “it will make sense when you stare at clouds.” I also had a hard time accurately describing what we might call textural-free improvisation. It’s like X-rays on the surface of the earth.

I discovered Scelsi’s music at about the same time I started listening seriously to freely improvised music. As a compartmentalizer, it’s convenient to keep “20th century classical” and “free improvisation” in separate brain boxes (with several layers of sub-boxes), but sitting around listening to Scelsi and Keith Rowe the last few days, I hear a “family resemblance.”

Imaginary Values (the working name for presenters Smith and Sandy Ewen) has been putting on shows at Gallery Homeland for a few months now. Gallery Homeland is the Portland/Houston project of Paul Middendorf. “We met while I was on the DiverseWorks artist board,” Smith says. “It turns out he has a long history with improvised music as presenter and listener in Portland and Chicago. It’s a great venue for improvised music.”

I’ve gone to a few of their shows there, and I agree. The room is small enough to lean in to quiet moments and big enough to hang out in the back drinking beer with your earplugs in. 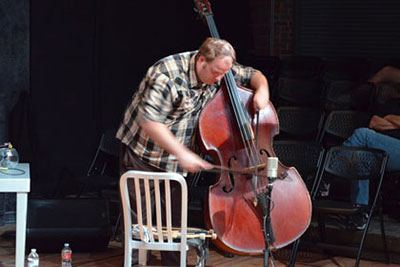 For the uninitiated, Keith Rowe (France/UK) is an important figure in the history of improvised music. Trained as a painter, Rowe altered the long standing tradition of picking up the guitar. He put it down. The “tabletop” guitar remains horizontal on the table while he manipulates the strings with objects, including everything from household items, like clothespins and string, to electrical equipment, like conductors and fans. Rowe, along with other prepared guitar players in the 60’s, expanded the possibilities of guitar. His vocabulary focuses more on what we might call “pure sound” and less on “notes.” This sound became a centerpiece of AMM, a very influential British free improvisation group. Keith Rowe and Kjell Bjorgeengens (Norway) have been collaborating for years on a project that constructs a precarious system involving multiple layers of feedback between Bjorgeengen’s video and Rowe’s audio.

Rick Reed (Austin) is, according to Smith, “one of the most important experimental musicians from Texas who stayed in Texas.” His work mixes short wave radios, synthesizers, and sine wave generators into lush soundscapes. He’ll be playing a Buchla Music Easel, which is a really unique synthesizer that, in the right hands, demonstrates the under-investigated potential early electronic music pioneers saw in the instrument.

Smith will be performing Scelsi’s Le réveil profound. “It’s an iconic work,” he says. “It was written for the great French bassist Joëlle Léandre. My colleague Mathew Sperry wrote to her and asked for copies of the scores for the Scelsi bass solos. She sent him Scelsi’s original scores.   Sperry was killed by a car while bicycling at only 36. He had no will, and had only said that his sheet music should go to me.”  Damon spent many years on the Bay Area free improvisation scene playing and studying with musical luminaries. Since moving to Houston, he’s been a mainstay playing and presenting on the scene. It’s always entertaining and illuminating to talk with him about art and music. 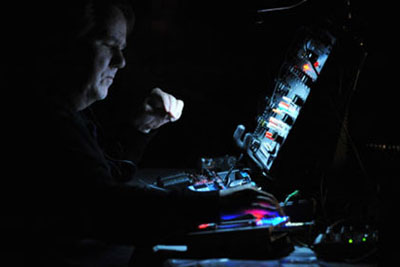 “The Master of the yet smaller transition,” Adorno said Berg said, of Scelsi. “In fact, his music is only transitions,” Harry Halbreich added. If his music is in fact “all transitions” it’s all for the better. Although Scelsi wrote pieces in a number of genres, his most interesting work is his piece based on the microscopic examination of one note. The note (or notes close to it) is expanded through microtonal variations, timbre, and more “sound based” modulations. One note may sound boring, but it’s some of the most intense music I’ve ever listened to. As a good friend of mine said, “I could get lost in a real dark forest listening to this.”

It’s a matter of looking at something, something maybe others have discarded as non-essential, and finding a way to make it undeniably essential. For me that’s not so different from the way good improvisors approach extended techniques. They take non-traditional elements of their instruments and develop them into rich vocabularies: Keith Rowe’s earpiece on the strings, Damon bowing the bridge of his bass, Reed playing a radio.

Contemporary classical – in the general marketing sense of the term – and free improvisation don’t really mix. It’s hard not to be reductive, but I think we’re probably better off in separate camps. I’ve always heard common ground between free improvisers and the composers in the experimental tradition, but I think Scelsi belongs to his own tradition. He’s mystical and visionary. It’s a shame his work rarely gets performed, given all the mediocre new music that gets performed instead. It, like the best improvisation, sounds timeless and powerful with every visit. I’m looking forward to hearing it all.