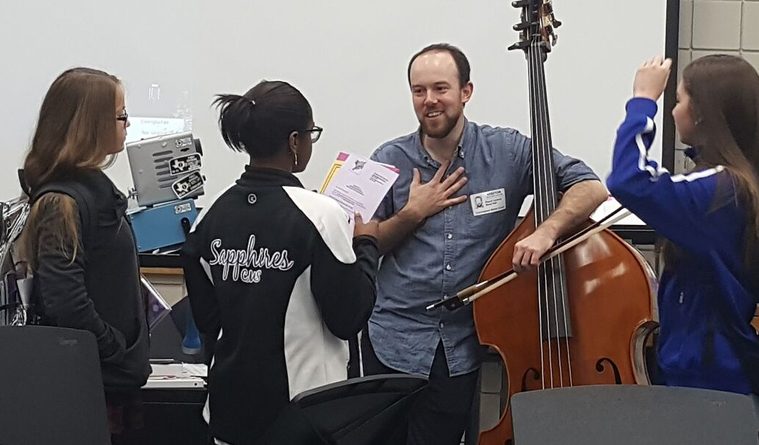 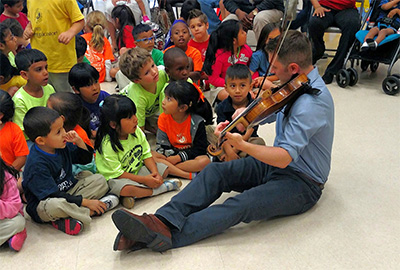 David Connor lets his double bass rest on the floor. Cradling an iPad and speaker in his arms, he circulates through the classroom as jazz icon Ella Fitzgerald cuts loose onscreen in It Don’t Mean a Thing if It Ain’t Got That Swing.  When the scat-singing whirlwind subsides, Connor asks the Crespo Elementary School fourth-graders what struck them. “She was inventing stuff,” a girl says.

“That’s exactly right,” Connor tells everyone. The Houston Symphony sends him to Crespo to introduce youngsters to the world of music, and today he’s helping them recognize the fingerprints of classical and jazz. Connor picks up his bass and plays a J.S. Bach bourrée; its free-flowing phrases, stopping and starting with no set pattern, come from a different musical world than the nonstop pulse of the rhythm section driving a Duke Ellington jazz-band number. The Star Wars theme displays a symphony orchestra’s power; a classical pianist tears through a weirdly colorful tone-painting from Mussorgsky’s Pictures at an Exhibition. Finally, without letting on, Connor puts the youngsters to the test.

From the computer emerges a piece that opens with a rowdy clarinet solo, then brings in an orchestra, then gives a piano the spotlight. Is this classical music, Connor asks, or jazz? As he draws the students out about what they’ve heard, a boy speaks up. “It sounded like both,” he says. “At first it sounded like jazz. But then it turned into classical.” He has gotten the message of George Gershwin’s Rhapsody in Blue.

“That’s a huge win, in my opinion,” Connor says later in an interview. The point isn’t just that the youngster is on Gershwin’s wavelength. He has combined his impressions and reached a conclusion—a skill that applies to much more than music. 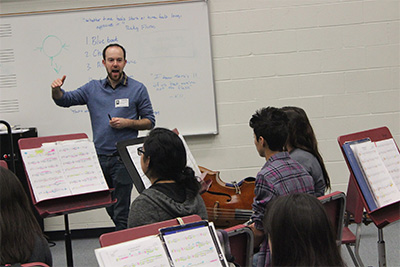 Setting off discoveries like that is what Connor’s visits to Crespo, an HISD fine-arts magnet school, are all about. The Houston Symphony dispatches him through its community embedded musicians program, which keeps Connor and three other young string players in near-perpetual motion crisscrossing the Houston area. They coach school orchestras and bands. They go room-to-room in Texas Children’s Hospital, serenading youngsters whose spirits need a lift. Before school groups come to Jones Hall for educational concerts, the musicians go to the campuses and introduce the students to the music that’s in store; they greet the youngsters at concert time, and then return to the school for a follow-up to help the students reflect on what they’ve heard.

Many orchestras and other cultural groups nationwide send teaching artists into their communities to play roles much like those. But the Houston Symphony program goes a step beyond: Its four young musicians occasionally perform in the orchestra, too. Concerts in the main classical series let them sample the major-orchestra life, and when they play in educational concerts, the students they’ve met during school visits can spot someone familiar onstage.

Connor, who earned a master’s degree from Rice University’s Shepherd School of Music, has been on board since the orchestra launched the program in autumn 2015. “I’ve enjoyed every aspect of it,” he says. “One of the things that’s cool is that it’s so new, and you feel like you’re part of something that could be very influential. And I love the experience of being able to heighten the concert experience for these students—to see that you really are making a difference.”

Connor’s compatriots are violinist Rainel Joubert, a Cuba native trained in his homeland and the United States, and two more Shepherd School graduates: cellist Hellen Weberpal, who has played with the Houston Symphony regularly since 2012, and violist Anthony Parce. They’ve won out over scores of other applicants after tryouts that included an instrumental audition—the kind that any potential Houston Symphony substitute goes through—and a 15-minute teaching session with children. 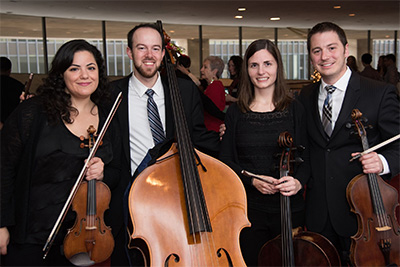 “People may imagine that we’re going around together like the Four Musketeers. But it’s not really like that,” Connor says. Fanning out across the Houston area helps them contribute to one of their program’s main goals: Maximizing the contact between the Houston Symphony and the community.

The program grows out of the orchestra’s Vision 2025 strategic plan, which calls for the group “to become the most relevant and accessible Top 10 orchestra in the country,” education director Pam Blaine says. Though Houston Symphony members have always gone into the community to coach school orchestras or carry out other musical evangelism, the orchestra’s busy schedule has limited what they can do. Thanks to adding Connor and company, the orchestra’s reach into the community has grown from roughly 200 events a year to about 900.

“It’s a wonderful program. They’re exposing the students to things they otherwise would never be exposed to,” says Eugene Ramirez, Crespo’s magnet coordinator. Connor thinks back to a recent visit to Ortiz Middle School, which Crespo feeds into. As he walked down the hall with his bass, a student called out to him: “Hey, you’re here! Remember me from Crespo?” It was a girl he had worked with last year, before she moved up.

“For a lot of those kids at Crespo, when they come to the concert (at Jones Hall), that is their first time in their lives going downtown,” Connor says. “And the experience can seem so foreign if they don’t have some exposure beforehand. It’s nice to see that those kids now have this association with the Houston Symphony or me or with classical music in general. ‘Hey, this is something for us.’”