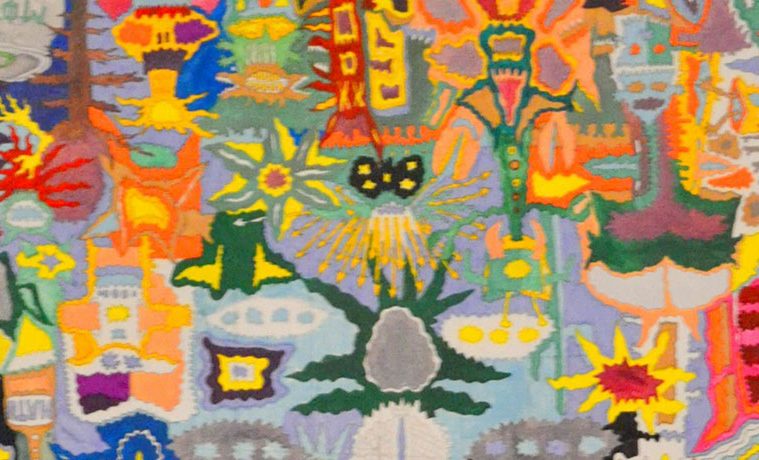 On reconciling outside and inside in the post postmodern world 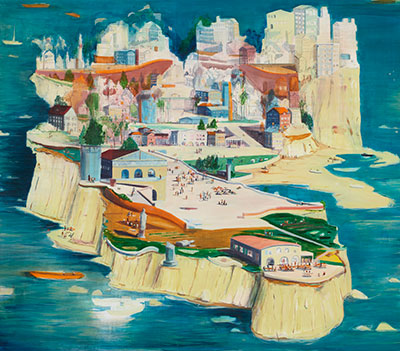 Jules De Balincourt, the artist currently the subject of the Fort Worth Modern’s FOCUS spotlight, is an “outsider” artist, at least as far as art critics of various stripes are concerned.

De Balincourt is a painter: A beautiful, sincere, “faux-naif” painter of people and places, a creator of art without narrative—art influenced by his “lived life,” his travels and his sub-conscious. It’s hard not to like his art, but, for many, it’s also hard to take it seriously. Prior to the opening of his show at the Modern I overheard De Balincourt assert his desire to “make my art accessible” while admitting his difficulty with abstraction owing to his “need to ground everything in reality.”

There’s been a lot of art in Dallas this last month, which would, by the establishment’s standards, be considered “outsider,” or, at the least, far from mainstream. Heyd Fontenot’s Draftsmen of the Apocalypse group show at CentralTrak and Jeff Parrott’s PsyExpression at Ro2 Art, spring to mind. The artist’s whose work is/was on view in both shows is busy, chaotic, occasionally (well more than occasionally) gruesome and quite often, purely sensationalist, although, like all art, it comes from somewhere inside.

Once upon a time, the term outsider referred to people that were really on the outside, not only of art, but of general culture, specifically asylum inmates and children. Recently however, it has come to refer to anyone considered outside of the establishment. You’re an outsider if you didn’t attend art school, or maybe you’re an outsider if you’re collected by some but generally not accepted in the museums and institutions that act as arbiters of art in the 21st century. Maybe you’re an outsider if you’re unable to make a strong enough argument for the why behind your art. Or maybe if your approach offends accepted aesthetic sensibilities. In the post-postmodern world of the 21st century, it’s not even really a derogatory term anymore, but it still implies a differentiation, and a consignment to a realm slightly less than that of fine art. Sure you’re an artist, you might even be “cool,” but you’re different.

Whatever definition is being used to justify the label in various circumstances, you’d be forgiven for suffering confusion after doing any amount of reading on “outsider art.” From the mouth of art critic Roger Cardinal himself, who ostensibly coined the term in the 1970s, outsider artists are “possessed of an expressive impulse” and they “externalize that impulse in an unmonitored way which defies conventional art-historical contextualization.”

Well, that’s funny: Once upon a time, wasn’t that what all contemporary art strove towards?

Art “has a basically undependable, treacherous tendency; its joy in scandalous anti-reason, its tendency to beauty-creating barbarism cannot be rooted out,” said Thomas Mann, one of the 20th century’s greatest cultural critics—a statement that seems especially à propos for the recent work of some of Dallas’ “outsider” artists.

But things have changed a lot since Mann’s heyday. The early days of Modernism and an art that was unsettlingly defiant, art you weren’t supposed to like, seem far gone. Although I will grant that art, for the most part, is still not intended for mass consumption, it’s rarely unsettling. You won’t be unsettled at MoMA or LACMA or any temple of contemporary art. And rarely will you feel the sense of urgency that once characterized art intended to incite revolution, or at the very least, reaction. We’re too de-sensitized to what has historically been considered “disturbing” or “offensive.”

I’m reminded of David Foster Wallace’s prescient recognition of irony’s co-optation by mass culture and its implications. Where once irony was a weapon artists of all types could wield against the establishment or oppressor, the tool has been co-opted, just as everything eventually is, by the mainstream. So too, the language artists invented in the 60s, 70s and 80s to reject and refute the establishment, has been co-opted. 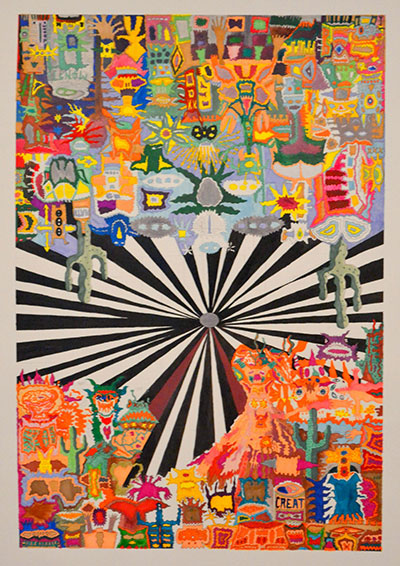 What happened in the continuum of art history that we have become more obsessed with the history than the art? How have we reached a point where each of us, even the most provocative artists, are in lock-step regarding what art is important, how we talk about it, and how we determine what makes it valuable? Since when have true artists ever adhered to the establishment?

Art means many things to many people. Just ask the artists. For some it’s about memory; for others it’s about creating a singular reality. In the age of post-modernism, post-conceptualism, post-everything, the question that begs to be asked (and has been asked by many before me) is, why do we still label anything? And why, more specifically for this argument, do we still differentiate between the “outsider” and the “insider?”

The more recent reevaluation of all visual culture and its realignment and repositioning inside the art museum—I’m talking everything from design, to music, to haute couture—serves to increasingly muddy our concept of art. And you know why? Because what we have in place is unsustainable. In the words of the great Jerry Saltz, the rather established “outsider” critic, “If art doesn’t let more of the world in, the world will let less art in.”

I don’t know where we go next, but the language must change, or at least diversify, and just as Wallace called for a sincere art to counteract irony’s proliferation, perhaps today’s artists need a push towards something else. As we try to find new audiences for art, the opportunity that lies in the in-between places, where various art forms coalesce, is perhaps one potential solution. Jeff Parrott’s musical performance which soundtracked his paintings at Ro2, or Thor Johnson and Joachim West’s hilarious artist talk ‘performance’ which accompanied their work in CentralTrak’s Draftsmen of the Apocalypse, reminded me how very important it is to acknowledge and discuss more openly how art is changing. How important it is to broaden our experience of it, and with it. I think they’re on to something. They’re letting more people in, and, so long as that’s true, how long can they be considered outside?