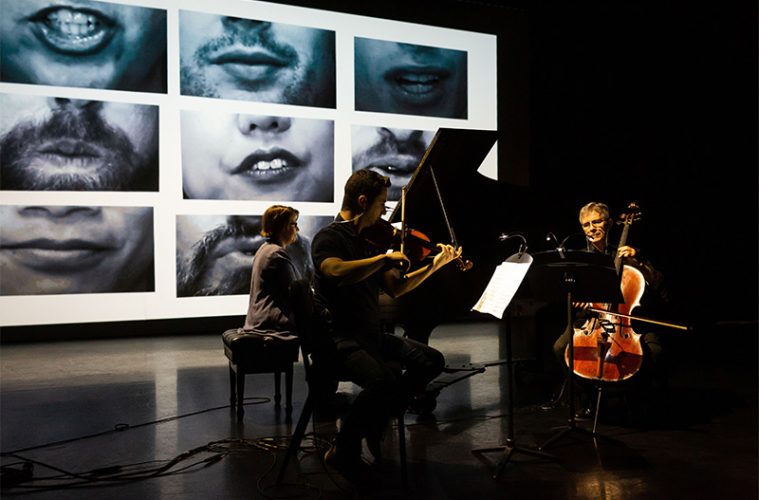 Anthony Brandt urges his composition students at Rice University to keep an open mind about the musical styles that influence them. “I often say, ‘Don’t put a fence around yourself. Feel the joy of having an open field around you, and discover what you might love that you didn’t know you would,’” he explains.

Though Brandt doesn’t draw the parallel, Musiqa–the new-music group he helps lead–evidently has its eyes on that same wide-open field. Its 2019-20 season will spotlight up-and-coming composers alongside veterans; chamber music as well as one-act operas. One concert will complement the music with video projections, and another will include Houston’s NobleMotion Dance. 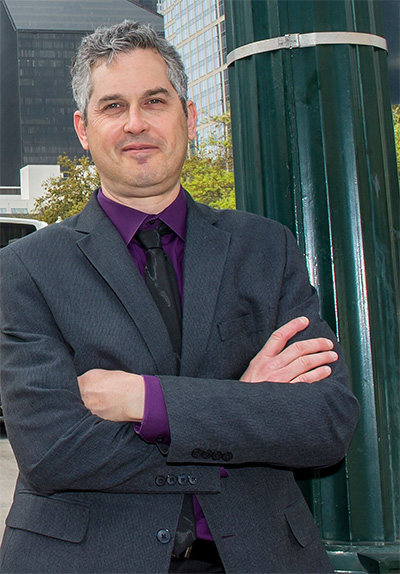 Musiqa will zero in on a country with a long musical tradition Oct. 18, with a program dubbed “Francosonic.” “You can say it’s French, but it’s really five different voices,” Brandt says. “You get an overview of French musical thinking and how broad it is.”

The concert will include the premiere of Repercussions by Raphaèle Biston, a native of Lyon who was largely trained there. Commissioned with the help of the Franco-American FACE Foundation, Repercussions will call on nine musicians to play familiar instruments in unorthodox ways. The new work should be “a wonderful complement to the things we are often doing, in that she’s very interested in cool sonic explorations–extended (playing) techniques, very imaginative effects,” Brandt says. “She’s got a wonderful ear and a great sense of pacing and form.”

Video projections by Houston artist Olivier Modr will accompany a piece that itself harkens back to visual art: Marc-André Dalbavie’s Palimpseste. Much as a visual palimpsest superimposes a new image over an older one, Dalbavie’s sextet occasionally lets fragments of a Renaissance choral work shine through. As the work unfolds, Brandt says, “there are always new things for your ears to discover.”

The program also will salute Betsy Jolas, who at age 93 is the doyenne of French composers. “Her music is very modernist,” Brandt says, “and very flamboyant in its complexity and virtuosity.” Jolas’ Trio sopra ‘Et Sola facta’  grows from a simple source: notes she heard her grandson play on his recorder. 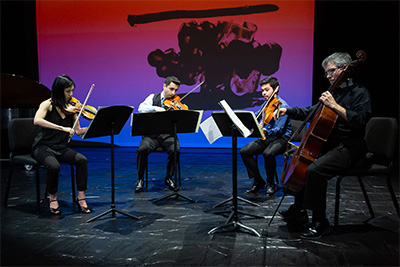 Musiqa will bring together Kinetic, Houston’s conductorless chamber orchestra, and NobleMotion Dance in performances Jan. 12 and 13. Kinetic will start the program with Starburst by Jessie Montgomery, an African-American woman whose music will appear on a Musiqa program for her first time. The brief Starburst is “very energetic and fun,” Brandt says. The ensemble also will play Brazilian composer Clarice Assad’s Impressions, a vigorous and soulful work it performed during one of its own concerts last season.

NobleMotion Dance will join in for works by Pierre Jalbert, another of Musiqa’s ringleaders, and Christopher Cerrone, who teaches at Baltimore’s Peabody Institute. Jalbert “was blown away” with what NobleMotion made of his String Trio when the dancers last partnered with Musiqa, so he jumped at the chance for an artistic reunion, Brandt says.

This time, NobleMotion’s Andy and Dionne Noble will choreograph Jalbert’s Autumn Rhapsody–inspired by the mountain vistas the composer recalls from his youth in Vermont–and Elegy. The dancers will also dramatize High Windows, a concerto grosso for strings by Brooklyn composer Christopher Cerrone. Inspired by a Philip Larkin poem of the same name–an older person’s look back at youthful tumult–High Windows encompasses both agitation and stillness.

Musiqa launches a new collaboration Feb. 23 and 29, when it teams up with Opera in the Heights to premiere chamber operas by Brandt and yet another Musiqa leader, Karim Al-Zand. “One of the fun things about writing operas,” Brandt says, is that “you get to tell a story that can really reach people. You can be adventurous musically, and they’ll follow you, because it’s in support of a story.”

Make that an age-old story in the name of Brandt’s Kassandra. It’s based on the myth of a woman given the power of prophecy–only to face the curse that that no one believes her predictions. Brandt says he and librettist Neena Beber cast the prophetess as a present-day climate expert whose computer models show that catastrophic change lies ahead. Embodying the myth’s Apollo, who delivers both the gift and the curse, her antagonist is a venture capitalist who decries her predictions after she spurns his sexual advances.

In yet another nod to the present day, the opera will begin with Kassandra delivering a TED-talk-style lecture about climate change, Brandt says. The scene will do more than just launch the plot: As she foretells what’s in store for the planet, “her music will predict all the music in the rest of the opera,” he explains. Along the way, “listening to the music becomes a way of saying, ‘You heard this before, and she told you it would happen. And it did happen.’”

Al-Zand’s The Leader also will resonate with today’s world, but more by implication. It springs from the eponymous play by absurdist writer Eugene Ionesco, who withholds the appearance of the title character, a ballyhooed political figure, until the final moments. The focus goes instead to a narrator–a newscaster, in the opera–and the leader’s admirers.

“People are utterly entranced with this great leader and observing all the things he’s doing, which get crazier and crazier. … But everybody is totally along for the ride and cheering–‘Oh, our great leader,’ and so forth,” Brandt says. He adds that Al-Zand “describes it as an opera buffa, because of the ridiculousness of the situation and the behavior of the people. … (Ionesco) wrote it after World War II. Now it’s all these years later, and it’s still relevant.”

Musiqa will end its season by spotlighting composers at the brink of their careers. The May 1 concert will feature two recent holders of the group’s Emerging Artists Fellowship: Joel Love, trained at the University of Houston and UT Austin, and Theo Chandler, a doctoral student at Rice. Both composers, Brandt says, exhibit the openness to musical styles that he preaches.

To round out the program, the performers will premiere the winning work from Musiqa’s new, nationwide contest for young composers who have earned a music degree within the past five years. “There’s nothing more wonderful than taking something you love and creating it yourself,” Brandt says. “Musical imagination is blooming all around us, and we want to help nurture and cultivate that talent.”