For those Texans seeking art refuge this weary winter, the Kimbell Art Museum has a queen’s knees of an exhibition to transport us back 3000 years into the world of Queen Nefertari’s Egypt (now through March 14).

Filled with extraordinary art and artifacts from Turin, Italy’s Museo Egizio, one of the oldest and important museums dedicated to Egyptian antiquities, this exhibition not only introduces us to the favorite queen of Pharaoh Ramesses II, but also gives a glimpse into the real lives and deaths of queens, artists and commoners.

To gain insights into Nefertari and her place in the New Kingdom period (c. 1539–1075 B.C.), I spoke to Jennifer Casler Price, curator of Asian, African and Ancient American art at the Kimbell.

Price says that though other exhibitions centered on women of ancient Egypt and individual queens have certainly toured before, Queen Nefertari’s Egypt has a range and expansive focus seldom seen.

“There have been no exhibitions focusing on Nefertari. I think a lot of people may not be familiar with who she is, though they may be familiar with Ramesses II because he is considered one of the greatest pharaohs of the New Kingdom period.”

Queen Nefertari’s Egypt could not present her times without also shedding light on the discovery of her tomb in 1904 by the early 20th century director of the Museo Egizio, archaeologist Ernesto Schiaparelli. He also initiated the first major excavation of Deir el-Medina, the artisan village where the workers and artists who built the tombs lived.

The exhibition tells the story of Nefertari’s power and influence and culminates with a reproduction of her tomb that includes several items Schiaparelli’s team found, such as pieces of her granite sarcophagus lid, her palm-leaf sandals and even a pair of mummified knees believed to be Nefertari’s only surviving remains.

But before we meet her in death, the galleries give us a view of New Kingdom period culture from the perspective of women and artists. The exhibition begins with monumental sculptures to the Egyptian gods, goddesses and pharaohs, but it also devotes a large gallery to the place of women in this world, especially in the palace, and a gallery to the artisans of Deir el-Medina.

“The excavation of Deir el-Medina, I think, is extremely fascinating. It’s so rare to have a domestic site excavated,” says Price. “There’s the royal side and the commoner side. Yet there are connections between them through religion, funerary practices, through the fact that these artisans were building the tombs for the pharaohs and the queens. There’s not just one but many stories that can be told.”

Near the end of the show, we find a gallery full of exquisite human-form wooden coffins, another Schiaparelli find while excavating the tombs of two sons of Rameses III.

Price believes there’s something for almost every art lover or amateur Egyptologist in the show.

“I love the range of material from the tiniest amulet or ring to the awe-inspiring monumental sculptures,” says Price of the 230 objects on view. “It’s always wonderful to have things of that scale that tell of the grandeur of ancient Egypt and the power and wealth of pharaohs.” She also notes, “There’s a nice ebb and flow where we go from the monumental to the more intimate but precious, then to the humbleness of the workers’ village yet still filled with amazing artistry and craftsmanship.”

Some of these smallest artworks and artifacts tell us the biggest stories of the everyday lives of queens and commoners, pharaohs and artists who built their final resting places. Price points to objects like a kohl pot to hold cosmetics, Nefertari’s sandals and the small ostraca—bits of limestone the artisans would use to sketch out their design—as some of the most meaningful treasures of the exhibition.

“Just imagine that scenario,” Price muses. “They’re carving away on a limestone slab for a larger carved stela and there’s chips lying around. They need something to sketch on, grab a chip, sketch on it and then toss it away. The immediacy and freshness of those sketches, and even the fact that they’re not complete—that really brings to life ancient Egypt.” 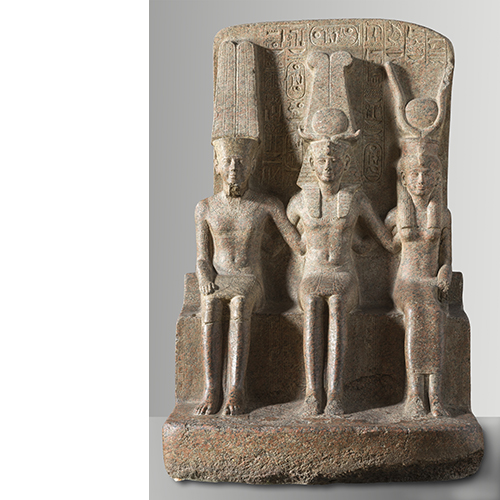 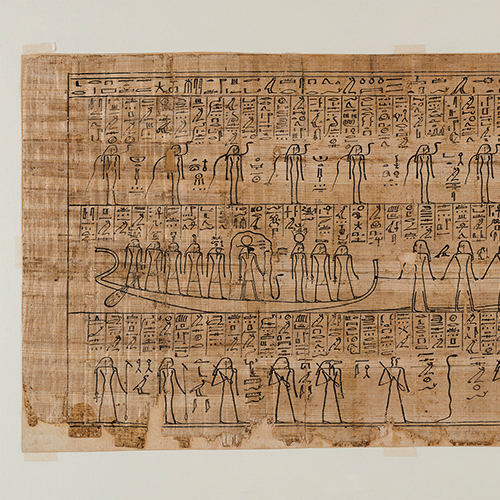 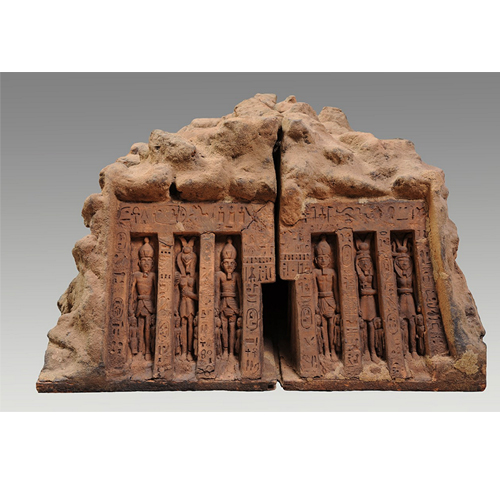 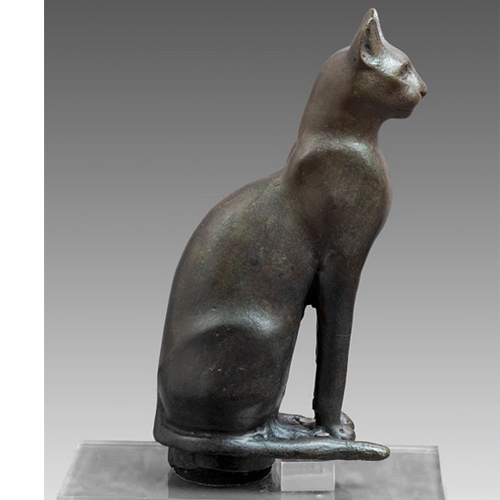 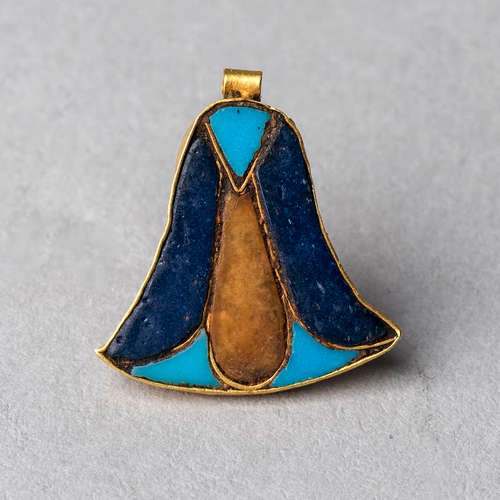 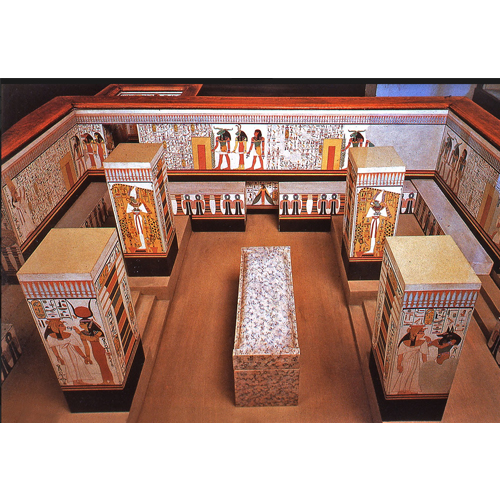 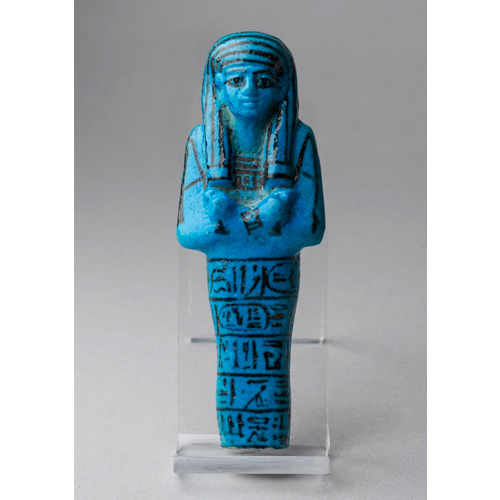 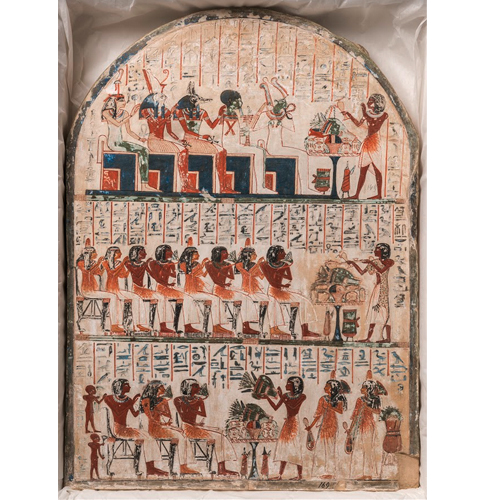 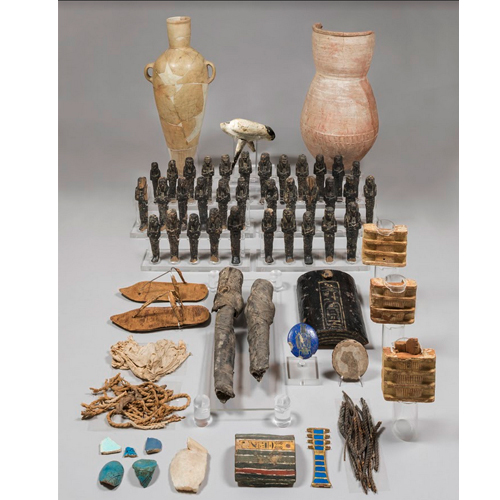 The Kimbell’s protocols to keep visitors as safe as possible during COVID times also meant Price needed to rethink spacing and even standard museum educational supplements like audio tours to keep people from crowding around one object or display case.

“Traditionally an Egyptian exhibition is a blockbuster for us. We have crowds of people. We had to anticipate that and figure out how we were going to deal with it,” said Price.

The history and commentary will still be included in the audio tour and wall texts, but Price says she focused on giving gallery and topic overviews instead of long highlights of one object.

They also created a virtual tour on the website for those not ready to see the works in person. But for Texans who have found a sense of normalcy and renewal going back to museums, Price understands the importance these institutions of art and knowledge give us in these many disruptive, and for some tragic, months.

“I think they’re a place of refuge,” she says of museums. “A lot of the comments we’ve gotten over the course of the summer when we opened up is that people feel safe because of some of the protocols we’re following. We’re hoping that we’re providing that with this exhibition.”