New Leader, New Focus: Theatre Under the Stars Returns to its Houston Roots 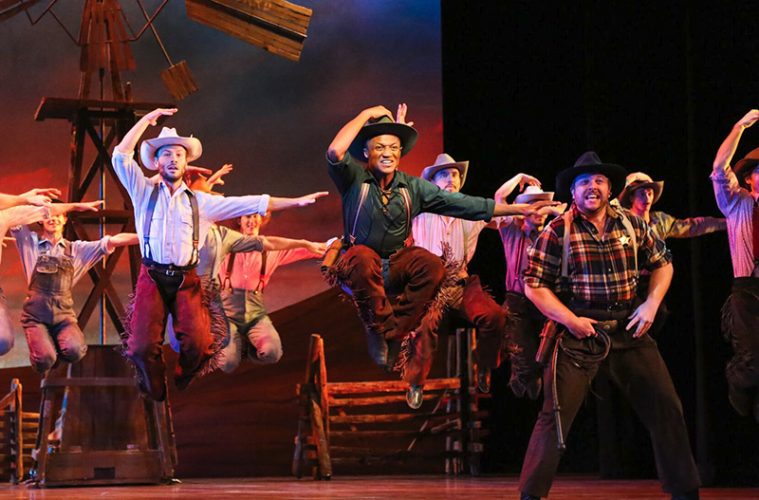 The cast of Oklahoma, produced by Theatre Under the Stars in partnership with Houston Ballet. Photo by Melissa Taylor.

When Tony®-Award-nominated director and choreographer Dan Knechtges took the helm of one of Houston’s oldest and largest theater companies, Theatre Under the Stars, he knew the artistic director title might require steering the organization through some stormy times, but he likely wasn’t ready for a real hurricane. TUTS weathered several artistic and administrative transitions in the previous years, but those changes probably seemed incidental compared to arriving in town only days behind Harvey to find a flooded city and Theater District. Yet, Knechtges leaped headlong into the turmoil.

In the year that followed, the new artistic director set out to guide the organization through a 2017-2018 season selected before he was hired, while immediately planning for the next season, TUTS’s 50th anniversary. The year taught him a few lessons. 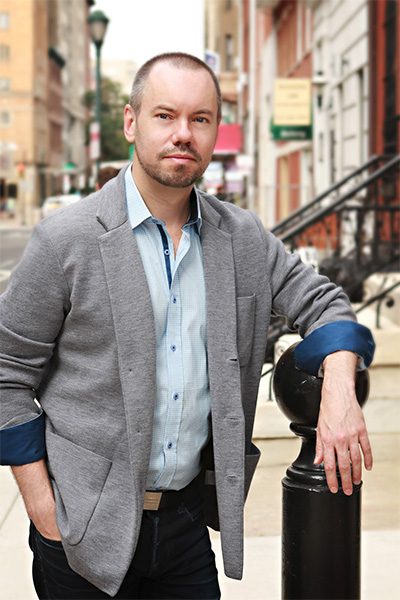 “I’m learning that sleep is overrated,” he told me during a recent interview in his comfortable TUTS office. Snuggling into his Disney Junior Dance Party hoodie—a bit of swag presented to him as the director of that live Disney parks show—Knechtges seemed only half-joking before taking the question a bit more serious.

As we talked, I realized he has taken the lesson to jump into the unknown as a guiding philosophy.

“We spend so much time analyzing if we’re capable of doing this and are we going to do it correctly, instead of saying: I know not what I’m doing. I know nothing, but I’m going to go ahead and do it,” he explains. “I think you learn more that way and in some instances, you create something new that’s better than what anybody who was prepared for that challenge could do.”

While the Hobby Center was the least damaged of the performing arts venues in the Theater District, TUTS still needed time to heal, and embracing community became the prescription.

“We were hurting from people not coming to the theater. Ticket sales were down, but then I look to our brother and sister organizations and they’re looking at huge losses from their theaters not being operational and other challenges,” he says.

Knechtges and TUTS executive director Hillary Hart kept those challenges in mind as they began work on the lineup for the golden anniversary. The first pick: Rodgers and Hammerstein’s Oklahoma!, staged in partnership with the Houston Ballet and HB artistic director Stanton Welch as choreographer. “That’s us accepting community help, and giving community help which leads to Oklahoma!. The collaboration with the Houston Ballet was born out of that.”

In another bow to Houston, Oklahoma! became the first show of a fully self-produced season lineup. In most past seasons, TUTS revived classic musicals while also presenting touring shows. This year all the musicals will be homegrown, including The Wiz, Disney’s Beauty and the Beast, Mama Mia!, Ragtime and Jerome Robbins’ Broadway. While the company will bring in directors and actors from all over, Knechtges has also committed to hiring local talent for both on and offstage.

So far, they’ve doubled and then tripled the number of local actors auditioning with each show since he directed Memphis in February. “I’m hoping we can attract even more talented people to live here and we’re able to provide employment,” he says. The other major casting commitment is to not be boring. 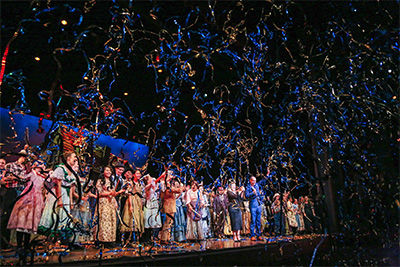 When I first spoke to him soon after his move to Houston, he told me that a company can only stage a musical like Grease in a traditional way a few times before the company and the audience get bored. While most of this season’s shows could be classified as modern classics or audience favorites, Knechtges says that’s no reason they can’t be staged or cast with 21st century perspective.

He gives Oklahoma! and its director Kevin Moriarty, the artistic director of the Dallas Theatre Center, as an example.

“Kevin is talking about the show as immigrants going to a new land, working very hard. Two separate groups of people who seemingly will never find common ground each give up a little bit of their freedom to form a new state. That sounds pretty modern to me.”

He believes even the singalong-able Mama Mia!, when seen and cast with a fresh eye, can surprise audiences. Knechtges will direct this “preposterous” tale of a woman who “doesn’t know who she schtupped to have this child” and stage it as a concert. He feels great love for the universality of its corniness.

“It doesn’t need to be three white women experiencing this. To me it’s timeless. It could be anybody. It could be someone from Sugar Land, the 6th Ward, somebody from the Woodlands,” he argues.

If the season began with a hoedown between theater and ballet, it ends with a celebration of both TUTS and Broadway’s past, the rarely produced compilation show Jerome Robbins’ Broadway. The St. Louis Municipal Opera Theatre (MUNY) had some controversy when casting The King and I segment of the show, which Knechtges stressed was a very “unfortunate” issue, caused by late changes in actor availability. He assures “all casting is going to be appropriate to the role” in TUTS’s massive production.

“There are very few theaters that could do it for the scope of the show, but we are inherently capable of doing it.”

Looking ahead, he still has many goals for TUTS, including a new works development series they plan to announce for the 51st season. Part of that series will likely include an annual commission for a new musical from a Texas team of writers. The goal of series will be to incubate new works the company can produce for the Hobby stage or beyond.

“My immediate vision is to reengage Houston and TUTS audiences in a higher level of artistic excellence here and really make musical theater important to them, not only as fun entertainment but as necessary for them as audience members living in Houston,” says Knechtges, but he continues to think into the future. “The grand scheme is to make a home for artists to create work that originates here and then we take to a greater audience, the world.”