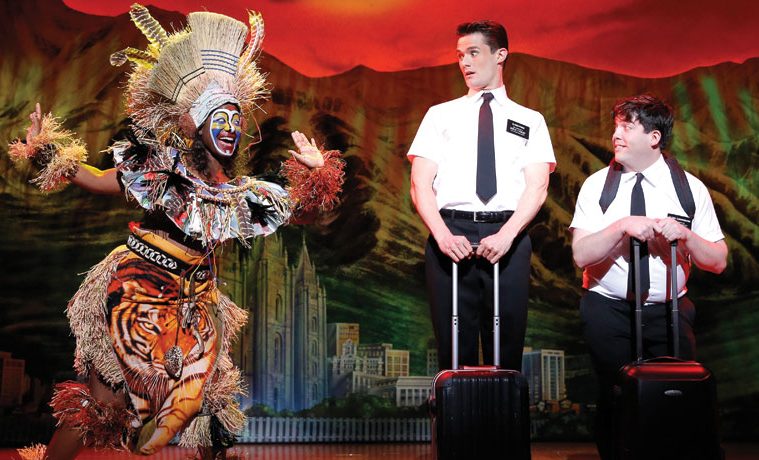 No Limits in the Book of Mormon

A centerpiece of the first act of The Book of Mormon is the song, “Hasa Diga Eebowai.” This Ugandan phrase punctuates the show’s irreverent version of “Hakuna Matata,” in which a tribe sings about AIDS, Africa, and telling God where he can stick his lightning bolts.

The secret weapon of this Tony award winning musical is the creative team of Matt Stone and Trey Parker of South Park fame, and Avenue Q’s co-creator Robert Lopez. For years, these men have been making crass wisecracks with cartoons and furry creatures. This time the jokes come puppet-free.

“I tell everyone The Book of Mormon is the musical for people who don’t like musicals and people who do,” says Samantha Marie Ware, who plays a Ugandan teenager who sets her sights on Salt Lake City. “My brother watched South Park, but I never really did, and it’s been interesting to me to watch the audience respond so well to the show’s edginess.”

The musical opened at Broadway’s Eugene O’Neill Theater in March 2011, and has seen full houses for more than two years running. While some critics complain that the show bows to popular culture and sensationalizes musicals, it’s easy to see the appeal of its catchy tunes and sharp satire.

The Book of Mormon lampoons the missionary culture of the Church of Jesus Christ of Latter-Day Saints. In this show, the church plops two wide-eyed Elders in a Ugandan village ridden with famine, poverty and AIDS. The writer’s quick, crude wit comes across in songs like “You and Me (But Mostly Me)” and “Joseph Smith, American Moses.” And Ware promises it’s “one laugh after another,” though the jokes in The Book of Mormon are decidedly not family-friendly.

The Broadway tour spends nearly two months in Texas; many performances are already sold out. It mounts first in Dallas at the Winspear Opera House, August 20 through Sept. 1. Then it runs at The Hobby Center in Houston Sept. 3-15; San Antonio’s Majestic Theatre, Sept. 17-29; ending at Bass Concert Hall in Fort Worth, Oct. 1-13.