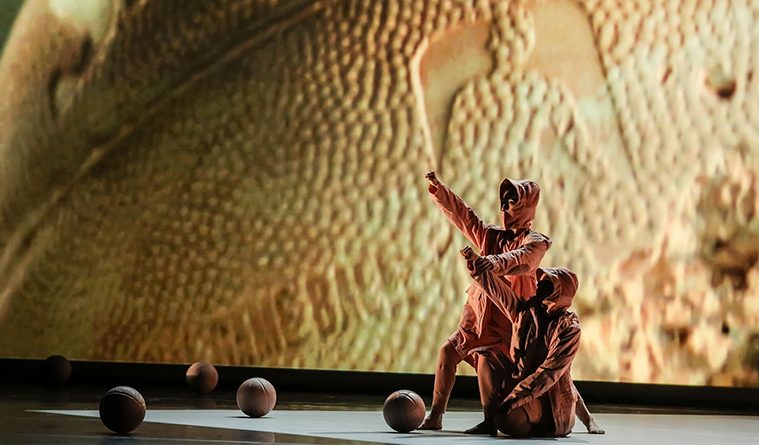 Laura Gutierrez and Callie Lyons in Jonah Bokaer’s Rules of the Game, with scenography by Daniel Arsham and music by Pharrell Williams at the Soluna Festival.
Photos by Amitava Sarkar. 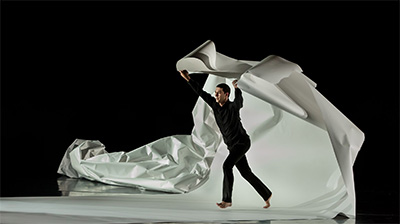 Jonah Bokaer in Recess, with scenography by Daniel Arsham.

Jonah Bokaer folded space in two in one sweeping motion. OK, so maybe he used a super long piece of paper to do that. Not everything that moves in a Bokaer concert is human. In fact, in the triptych of pieces he presented as part of the opening of The Dallas Symphony Orchestra’s Nancy A. Nasher and David J. Haemisegger Family Soluna Music & Arts Festival, the movement of objects was as important as the dancers.

Bokaer, an internationally known artist, has a long history collaborating with the visual arts and presenting his work in museum settings. Bokaer has recently received a 2016 Civitella Ranieri Foundation fellowship Award, in the category of Visual Arts, which is the first time in the Foundation’s history that a choreographer has received the award. Although Bokaer has a long history in Houston, with performances at DiverseWorks and through the University of Houston Cynthia Woods Mitchell Center for the Arts, this was his Dallas debut. The premiere of the evening, Rules of the Game, was developed though a workshop process in Dallas, so let’s salute the Soluna for commissioning work created in Texas.

Recess (2010) starts in a spare mood with Bokaer standing still. He does that well. He’s a minimalist at heart, fully aware of the architecture of his own body and how it fills a room. Movement choices are efficient, carved clearly in space, and without much adornment. Flow is used sparingly, and sometimes, the paper performs all the flowing. For example, when Bokaer’s perfect tendu unrolls the paper, we watch something as simple as the paper barreling across the stage. 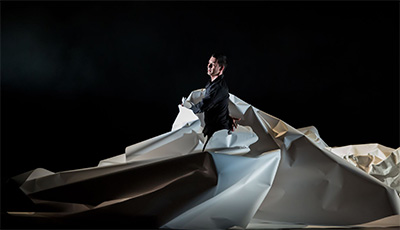 Jonah Bokaer in Recess, with scenography by Daniel Arsham.

Recess is Bokaer’s pas de papier, in that the shapes created by the paper are as dominant as his own. As an excellent partner he makes the paper look really good, taking on various sculptural qualities and holding its shape in ways that let the light give it more visual heft. Aaron Copp’s lighting design gave the shapes a luminous presence. Bokaer creates a stunning iceberg that then take a life on of its own, sneaking off in unexpected directions, thanks to James McGinn’s hijinks under the paper. A pristine white mountain range emerges later on in the work too.

Throughout Recess there’s a tension between the exactness of Bokaer’s movements and the rogue movements of the paper. He wraps himself inside the paper, which tears in unruly directions. I wonder who’s in charge here. Probably the paper, and that’s the fun in it. Imagine an origami where the paper folds the folder. Minimalism needs a little humor valve, and Bokaer finds it in these moments when we see him wrestling with the paper. Daniel Arsham’s clever scenography truly becomes an equal partner in Recess.

Recess enlists a potent mix of austerity and wit, two things we don’t usually see combined. Add in Stavros Gasparatos’s vivid score, the monumental backdrop of the Winspear Opera House, and the elements blend into a strangely intoxicating tincture.

If Recess is a good introduction to Bokaer’s brand of minimalism, Why Patterns (2011) takes that aesthetic further, especially in the use of objects, this time, ping pong balls, and what looks like thousands of them. If you were lucky enough to see the piece from above, you were able to see two dances at once, the random one performed by the balls and the one performed by the dancers trying to navigate around them. The first part of Why Patterns is performed within a square created by four tubes, which we eventually learn contain more ping pong balls. The dancers do their best, as Bokaer did in Recess, to contain the bouncing balls, but again, the balls will have none of it. When they sweep their legs and the balls roll, or random balls are tossed on to the stage, we see the dancers coping with a rolling and random landscape. It’s sweetly menacing, because, well, they are ping pong balls, and we all know that gentle sound of one of those babies rolling across the floor instead of towards our opponent. 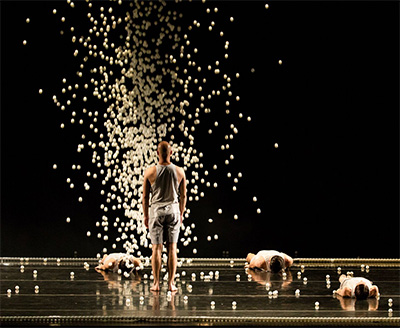 Performed with precision and savvy by Laura Gutierrez, McGinn, Szabi Pataki and Sara Procopio, Why Patterns also traffics in control between human and object, and for that matter the actual traffic between the two. Why Patterns is set to the Morton Feldman composition of the same name and a commissioned score by ARP/Alexis Georgopoulos, and the scenography is by Snarkitecture (Arsham and Alex Mustonen). As the piece draws to a close, I had the feeling that the humans should not have the last bounce. And sure enough, like a sneaky wink, a lone white ball bounced across the stage just as the lights faded.

The paint is still fresh on Bokaer’s world premiere Rules of the Game, again with scenography by Arsham, in that it feels still in motion. I imagine the work will evolve as it travels to its next destinations. Yet the elements are all there, but this time in a completely different scale. The title is a reference to the Luigi Pirandello play of the same name. Bokaer, in an interview, mentioned the Pirandello as a starting point, and I will just go with that.

With Arsham’s video projections of gigantic slow motion falling ceramic basketballs and ancient looking busts, we wonder what kind of apocalyptic world we have landed in, and suddenly it all doesn’t feel so minimal. Bokaer plays with scale, sometimes framing his dancers under a slow moving object as a curious dynamic emerges between the projections and the dancers’ movement. A particularly poignant juxtaposition occurs when the dancers nestle under the chin of a replica of McGinn’s head while McGinn bends away. 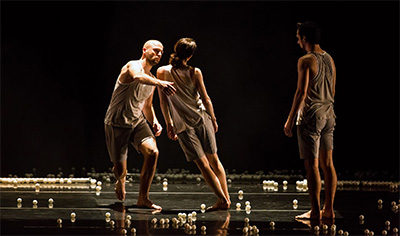 When the projections go away giving us a visual rest, the choreography punches up and suddenly the dancers look larger. Bokaer’s choreography moves in and out of tight groupings, rough and tumble partnering, and extremely athletic solos. Albert Drake takes center stage in his dynamic solo, his fluid lines and soft edges create a striking contrast to the nuclear winter atmosphere of the piece. No matter what is happening on the scrim, all eyes are on him.

Costumes by Chris Stamp/Stampd are shed during the course of the piece. Perhaps the dancers are acclimating to their new world. When the balls and heads start exploding it becomes harder to concentrate on the dancing below. But having a lot to look at is part of Bokaer’s choreographic engine. You shape the experience according to your own perception. As Rules of the Game continues, the balls and head enter the stage and into the dancers’ hands, where they finally get to play the game. And at this time, it makes total sense that they are now dressed in what looks like play clothes.

The excellent dancers, listed as performance collaborators, include Gutierrez, Drake, James Koroni, Callie Lyons, McGinn, Pataki, Procopio and Betti Rollo. The soothing, but mostly underwhelming music by Pharrell Williams was arranged by David Campbell and vibrantly played live by the musicians of the Dallas Symphony Orchestra. 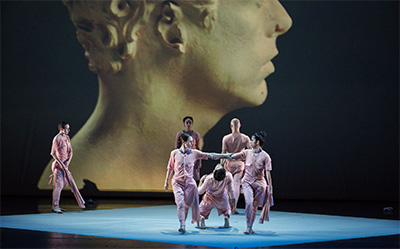 In Rules, Bokaer lets go of some of his formalist tendencies. The piece feels a little looser that the earlier works, free form and at times unruly. I imagine the rules of Rules will evolve over time as the piece tours, eventually landing at the BAM Next Wave Festival on November 10-12, 2016.

Like Recess and Why Patterns, Rules of the Game also dwells in the tension between object and mover. In Bokaer and Arsham’s rulebook, we humans exist in partnership with a world in motion. Play, rather than domination, seems to be at least one rule of the game.