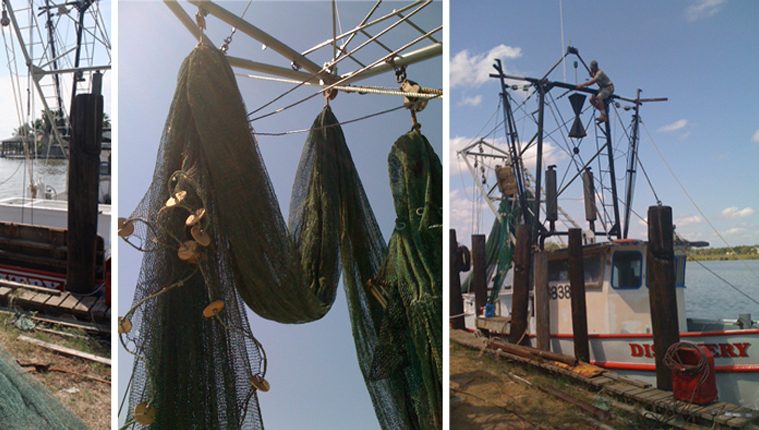 As I write, pharm people throughout the world are occupying their respective cities — gathering to protest the current economic condition. One of the main concerns of the protests is occupation itself — employment, or lack thereof. On that note, if you could have any job in the world, would you ever answer “on a ?”

Artists Eric Leshinsky and Zach Moser are doing exactly that: shrimping. Since January 2011, they have been occupying themselves as bay shrimpers in Galveston, Texas, launching Shrimp Boat Projects, a creative research project that explores Houston’s regional culture. Leshinsky and Moser believe bay shrimping offers unprecedented knowledge of the region.

That’s a tall order for those little shrimp. (Okay, okay. It’s a big deal for the artists, too.) Moser and Leshinsky are both trained as artists, with schooling and experience ranging from political science to sculpture. As current artists-in-residence at the University of Houston Cynthia Woods Mitchell Center for the Arts, Moser and Leshinsky are working to synthesize the competing interests of ecology, economy and culture.

The artists work in direct relationship to the land, attempting to translate their discoveries across diverse audiences and disciplines. In addition to boat mechanics and geography, I was curious what other lessons are they learning.

“We articulate the understanding we are pursuing by talking about the difference between information and knowledge with the major distinction being an idea of experience,” says Moser. “In a world so focused on information, it is not acknowledged enough that information without context is hollow.”

Finding appropriate forms to embody one’s ideas is an ongoing creative pursuit. But as artists committed to this specific region, Moser and Leshinsky recognize they need look no further than the bay itself. They are pursuing a fundamental regional identity for Houston through experiential learning, or learning-byshrimping.

The Mitchell Center has a history of supporting such enterprising artists-in-residence who have an interest in land use and related industries. And the results are astounding. For example, The Center for Land Use Interpretation (CLUI) established the Gulf Coast Field Office on Buffalo Bayou Partnership property and mounted the Blaffer Art Museum exhibition “Texas Oil: Landscape of an Industry;” Karyn Olivier created a city-wide installation incorporating 13 billboards along Houston’s downtown freeways; and Amy Patton developed the commissioned filmed theater work “Oil” (2010), inspired by Upton Sinclair’s novel “Oil!” and filmed entirely in a UH black box theater. Additionally, the artists-in-residence regularly work with UH students in seminars, workshops and semester-long coursers.

“Being Artists-in-Residence at the Mitchell Center for the Art has indeed been crucial to the formation of Shrimp Boat Projects,” explains Moser. “UH is the ideal context in which to research our pedagogical hypothesis that understandings of a place can be categorized as productive and/or relevant, and that methodologies of understanding a place directly inform this relevance. Coordinating classes and events in conjunction with the Mitchell Center (and in collaboration with the UH Creative Writing Program, School of Art, and Interdisciplinary Art Program), and its focus on new forms of interdisciplinary art practice, has allowed us to test these ideas with a variety of venues and audiences.”

As co-director of PLAND, a site-based, somewhat restricted access residency program, I’ve observed that the inaccessible nature of a place is often what draws people in. And shrimping is, for most of us land-dwellers, inaccessible.

To effectively communicate what they are learning while “on the inside,” Zach and Eric Shrimp Boat Projects in ways that are accessible: special events, films, lectures, and more. For example, during the DiverseWorks Art Space “State Fair” (think contemporary art fair meets street peddling), they set themselves up as seafood market vendors and sold fresh shrimp caught on the “F/V Discovery.” Additionally, they invite the public to learn from other artists who work with economy, and the ecology of a place.

On November 16, the Mitchell Center and Shrimp Boat Projects present a free lecture from Mierle Laderman Ukeles at UH followed by her conversation with Moser and Leshinsky addressing labor and art, moderated by UH School of Art Assistant Professor of Critical Studies Jenni Sorkin. Ukeles is best known for identifying herself as a “maintenance artist” and producing her manifesto “Maintenance Art — Proposal for an Exhibition.”

After more than 30 years of feminist-informed, service-oriented artwork, Ukeles continues to research “the hum of living” as Artist-In-Residence at the New York City Department of Sanitation, translating her research to the public and in turn creating a diverse audience. Shrimp Boat Projects will continue for at least the next two years, so the work has just begun for Moser and Leshinsky. With this first phase supported by the Mitchell Center, they are well on their way to discovering how effective their occupation as can be.

— NANCY ZASTUDIL
Nancy Zastudil is an itinerant curator and co-founder and co-director PLAND. She is working with the University of Houston Cynthia Woods Mitchell Center for the Arts to document and archive Shrimp Boat Projects.