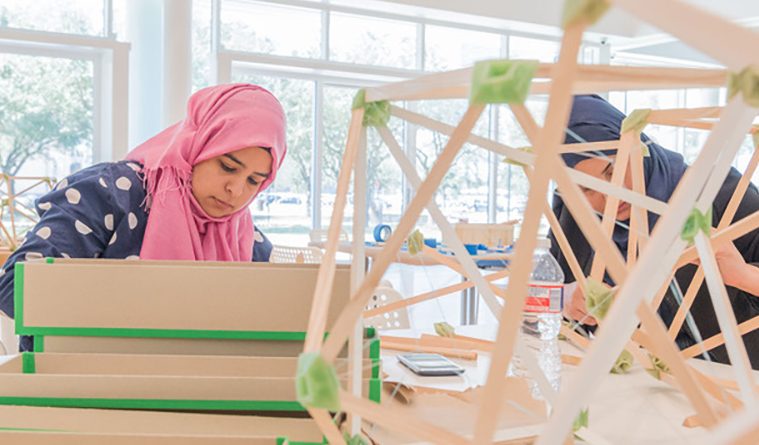 Olafur Eliasson, Green light –An artistic workshop, 2016. Coproduced by Thyssen-Bornemisza Art Contemporary. Image of the workshop at the Moody Center for the Arts, 2017.
Photo by Nash Baker. 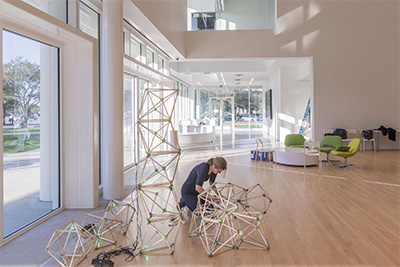 Olafur Eliasson, Green light –An artistic workshop, 2016. Co-produced by ThyssenBornemisza Art Contemporary. Image of the workshop at the Moody Center for the Arts. Photo by Nash Baker.

Olafur Eliasson is a Danish-born artist who has presented his installations and socially-riveting interventions around the world including The Weather Project at the Tate Modern, Blind Pavilion at the 50th Venice Biennale, and New York City Waterfalls  in New York City. In 2008, Eliasson’s Take your Time opened at the Dallas Museum of Art in collaboration with The San Francisco Museum of Modern Art and last year he presented The Collectivity Project, a large scale interactive white lego building installation, at the Museum of Fine Arts, Houston.

This February, Houston’s Rice University recently opened the Moody Center for the Arts, a new international arts facility, with the U.S. premier of Olafur Eliasson’s Green light – An artistic workshop which addresses the current international refugee crisis and geopolitical issues of global migration. The Moody Center and Eliasson are working directly with refugees, asylum-seekers, and migrants by inviting them to participate in a multifaceted program of shared learning that includes workshops, seminars, artists interventions, and film screenings Feb. 24th through May 6th. For Green light, Eliasson designed modular green light fixtures that are constructed during workshops and then made available for sale with proceeds benefiting Interfaith Ministries, Moody’s collaborator, to support ongoing work with international refugees.  A+C writer Paul Middendorf sat down with Eliasson to talk about the inner workings of the project. 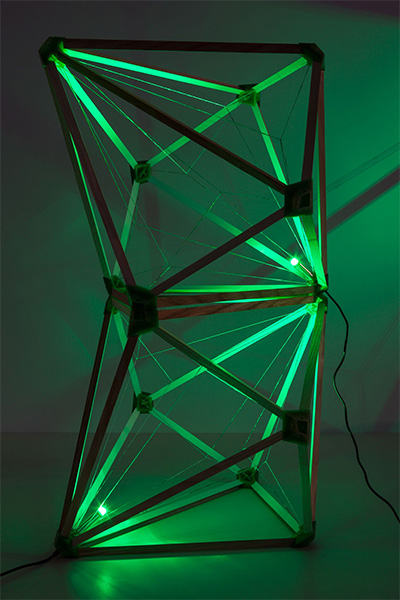 Green light is an ongoing collaborative project conceived by you and co-produced by Thyssen-Bornemisza Art Contemporary. Can you tell me about that process? Why is the project important for you to bring to the forefront?

OLAFUR ELIASSON:  In 2015 I was working in Vienna in collaboration with TBA21 on a show at the Belvedere Museum. We were working on the show while the refugee crisis was getting very serious and becoming more visible. It felt odd to work on a show in the middle of a city that was dealing with not knowing how to handle the refugee crisis. It was unprecedented. So we decided to do a project in a public space that would address “how to go about the refugee situation.” TBA21 contributed with social science resources, reaching out to NGOs and organizations that work with refugees shelters, translators, trauma experts, and so on. It was a growing project that became about how the cultural sector is capable of offering solutions and platforms that are productive and have positive outcomes. It is important to say that while this is my project, it is a collaboration with social scientists, social workers, and caretakers.

Your work seems to dance between playful and socially-grounded. Can you tell me about this dichotomy in your work and the role it plays in your projects and collaborations? Do you see Green light as a departure?

I think all art, in various ways, has social dimensions. Even looking at art is a fundamental way to look at yourself. Your brain tells you that what you see is what you are experiencing. But if you are looking at a painting, the interpretation exists within yourself and not on the wall. What I’m interested in is how engaging in art effects the viewer. For me, great art is capable of helping people negotiate with themselves who they are and what qualities they want in life. All of my art works in one way or another trying to address that. The works I do that are more immersive, like large scale installation, question what it means to actually take a stand in life. How do we find out who we are, how we translate ideas about ourselves into the way we live? Sometimes the works are successful and sometimes less successful. Green light is more of a workshop format where the immediate aesthetics are within a small handheld object. The space itself is a more pragmatic space. It’s a bit like a laboratory.

I find this project fascinating because of its overall depth of creation, your conception and delivery, the site-specific fabrication, and community-dependant completion. What makes the final object carry the weight of your message and voice on the subject?

The green light, the actual sculpture, functions on several levels. If you just have a straightforward informal relationship with it, I think it is a quite beautiful diamond-shaped object to look at. You can see the materials it is made of—it isn’t hiding anything. Now, if you want to take it one step further, and you look into the mathematics of it and actually take a closer look at the object, you will see it is made of sustainable materials. You can see the algebraic content and that it is derived from a cube which has been cut in a specific way. What has been taken away from the cube has the same mass as what is left. They are units that can be compiled together. Depending on how you put them together, they become a sphere or they can be a cube, or a wall, or ceiling, or floor. It is a modular system that could be used as an architectural component. 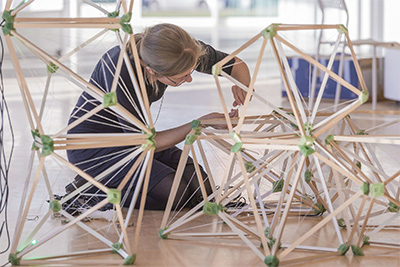 Olafur Eliasson, Green light –An artistic workshop, 2016. Co-produced by Thyssen-Bornemisza Art Contemporary. Image of the workshop at the Moody Center for the Arts, 2017. Photo: Nash Baker.

We are delighted to have been one of the three cities to host Green light. What is the significance of utilizing only three cities in a limited release of the project?

The project takes a lot of local motivation. We want it to continue and expand even further, and we are looking at how to replicate it, like “copy and paste.” To be totally honest, it wouldn’t have to be my Green light. It is also interesting to look at this as an example of how when you get people together in a way that allows them to share their labor and efforts, you can achieve a lot. The project will travel to other cities as well but, more importantly, it is the idea that people might be able to do more for each other than they think.

Now that the project is well underway, how have you gauged its success with so many moving parts? Are you pleased with its outcome so far? Is there a final conclusion to this project?

Questions of refugees, immigrants, inspiration, and fundamental human interaction are never going to be resolved. That is an ongoing challenge shaped by the times in which it is happening. I think Green light is a project that can live on for a while but can give seeds to other ideas. Obviously, we have seen immigration in different parts of the world and in various ways but one of the greatest challenges is in Europe. Where I grew up, we see the lack of integrated efforts from the countries that have played a role in creating marginalized groups or ghettos. I know there is a different history here in the U.S. but there are similar challenges. Successful integration relies on a larger fundamental question: How does a nation see its future? I am convinced that refugees and migrants can strengthen the future of our countries in prosperous way—socially, economically, and in terms of urban stability. In that context, Green light is trying to promote a humanistic or value-driven statement. I hope that we are one of many initiatives that can push that thinking forward.