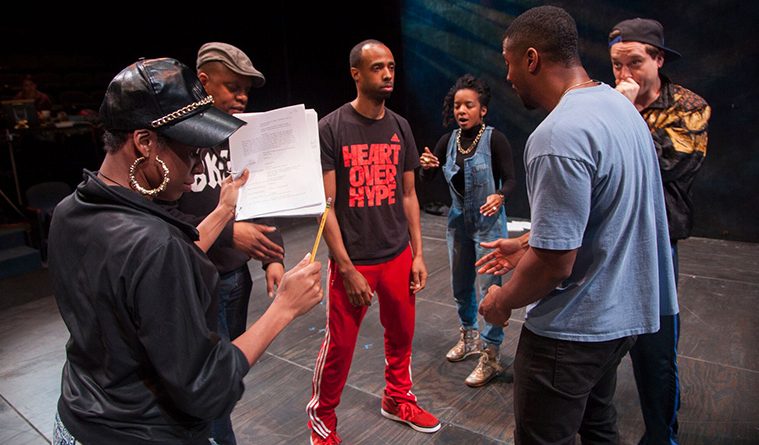 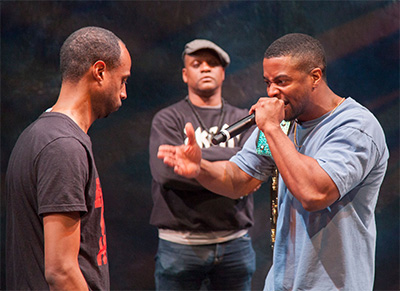 Scene: a bare stage anywhere—in a theater, a rehearsal hall, even on an outdoor platform under a tree.  An actor or two (or three or 20) enter with scripts in hand. Somewhere in the house a playwright looks on and listens to the actors and the audience, present and part of this experiment in change and process. This is not a traditional performance, but a reading of a new play and it’s theater of a different, unfinished and sometimes revelatory kind.

While I had attended play readings in the past, I didn’t gain an appreciation for them until two summers ago when I received a fellowship to the National Critics Institute at the Eugene O’Neill Theater Center. For decades, the O’Neill has hosted the National Playwrights Conference and the National Music Theater Conference, where writers come to workshop their plays, culminating in several public readings, while critics sharpen those reviewing skills writing non-publishable reviews of plays and musicals still in progress.

I returned to Houston with a deeper understanding and appreciation for play readings, and soon realized that not only were public readings of plays-in-progress happening throughout the local theater community but that reading festivals were becoming the height of theatrical fashion. So with reading series set to become the new black in 2017—every theater company that’s any theater company has got to have one—I set out to better understand the reading’s allure for companies and more importantly what’s in it for audiences.

In October of 2015, the recently formed Next Iteration Theater brought together five other companies to present ReadFest at the recently-opened MATCH. Although ReadFest was new, one of those companies, Wordsmyth Theater Company, had been focusing on play workshops and readings for almost a decade.

Elizabeth Earle had formed the company to produce two specific plays, after which Wordsmyth had to determine what kind of theater it wanted to become. “We decided that what was really needed in Houston was a theater company devoted to developing new work. Edward Albee had done play development in Houston before; but he wasn’t coming to Houston any more so there was a void,” Earle explains. 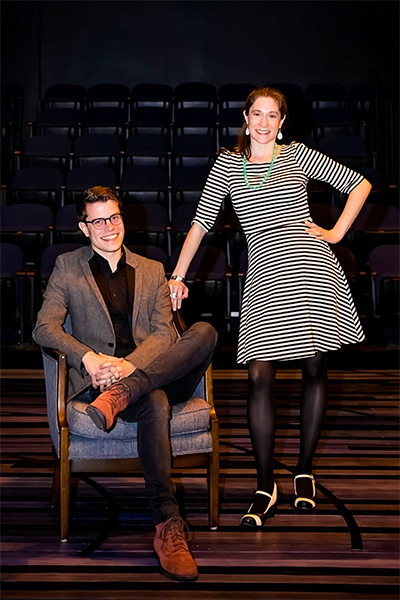 Another of the ReadFest gang of six, The Landing Theatre Company, created its own reading series, New American Voices, several years ago. (Its sixth annual event will take place April 1-2, 2017.) “From the inception, one of our goals of this company was to have a hand in the development of new works,” says artistic director David Rainey. “A reading series that seeks the best in playwriting on a national scale was in line with our mission and seemed like the best way to tap into what was happening with new plays around the country.”

But when Houston’s largest and oldest theater, the Alley, announced it too would produce not only a reading series but also a new play festival, I knew the reading format had reached starring role status. The Alley All New Festival is part of an initiative to premiere more new works at the Alley while also striving for a more “robust engagement with playwrights” says Elizabeth Frankel, the Alley’s Director of New Work.

The Alley began several different programs under this initiative, including scheduling public readings of plays in progress throughout the season, along with occasional workshops. In August, the theater hosted a weeklong workshop for singer/songwriter Susanne Vega’s new one-woman play Lover, Beloved, culminating with two public musical readings.

The Alley All New Festival debuted in late January 2016 and returns February 2-12, 2017. For 10 days, Alley audiences can attend free readings and workshop performances of five new plays from playwrights Robert Askins, Bekah Brunstetter, Christina Gorman, Rajiv Joseph and Kenneth Lin. As part of their regular season, The Alley will also present the world premiere of NSangou Njikam’s Syncing Ink, which was a part of the inaugural All New Festival in 2016.

Syncing Ink is a good example of how occasionally a play can go from reading to a full production at the same theater. Frankel recalls how Alley artistic director Gregory Boyd knew by the intermission of the festival’s Syncing Ink read that he wanted the play for the Alley’s 2016-2017 season. Typically, plays take a more meandering journey from reading to full production. Wordsmyth chose Phillip Dawkins’s Failure: A Love story as part of its Playwriting Reading Series in 2011. A year later, Chicago’s Victory Garden Theater produced it and there Kenn McLaughlin, artistic director of Stages Repertory Theatre, first encountered it and decided to bring it back to Houston for the Stages 2014 season.

Why have reading series become so popular?

“They are popular at least in part because they are cheap to put on,” explains Earle. “You can also do readings of plays you may not be able to produce. The play calls for lots of nudity? No problem; no costumes in a reading,  so no one gets nude. Lots of costly or almost impossible special effects? Those will just get read as stage directions.” 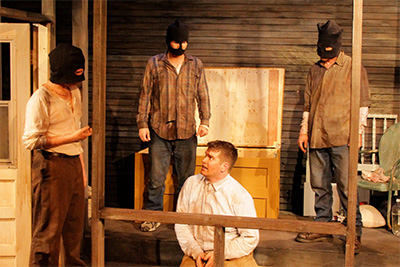 EXIT 27 by Aleks Merilo was part of the Landing Company Reading Series in 2012. Pictured: Danny Dyer as Ryker, James Monaghan as Dodge, Jack Ivy as Shyler and Tim Ashby as Brodie in the 2013 production of Exit 27. Photo by Anne Quackenbush.

David Rainey cautions that they’re not quite as frugal an endeavor as they may at first seem. “Readings series are more costly than most people realize. Readings for us typically make little to no money. In order to get through the sheer volume of hundreds of scripts submitted to us each year we have to hire readers who are paid a small amount for each script read,” he explains, but reaffirmed the creative endeavor is worth the cost.

“What the Landing, the Alley and Wordsmyth are giving to playwrights is validation for their stories and craftsmanship, a safe place to view and further develop their work, artists to breathe life into the work, and an audience to interact with—all of which are invaluable to the solitary process of playwriting,” says Rainey.

Three of playwrights featured in the 2017 festival—Kenneth Lin, Rajiv Joseph and Robert Askin—have had plays produced at the Alley, and two of the plays slated for the fest (Lin’s The Adventure of Huckleberry Finn and Joseph’s Describe the Night) were commissioned by the  Alley, so local audiences might see these works again. If not in Houston, perhaps someone else will give them a home. “Part of the point of having a festival is to share these great plays with other industry folk, in addition to your audiences, in the hopes they go on to have beautiful lives. If it’s not at the Alley, it’s elsewhere,” says Skyler Gray, Alley’s Literary Manager who works closely with Frankel.

With all the benefits of readings and reading series for playwrights and theater companies the question still has to be asked: What’s in it for the audience? Why would even the most ardent theater geek want to see actors sit around in chairs reading from pages on a music stand?

“We actually have a few people who prefer readings to full productions,” said Earle. “They like focusing on the words. They also like the discussion afterwards.”

Many readings give the playwright and audience a chance to ask questions of each other, so that the audience becomes part of the creation process. “What they also get out of it is the opportunity to see a fantastic play,” insists Frankel. “One benefit for any theater having a reading series, doing a festival or doing a workshop performance is that it gives them the opportunity to present more plays.” 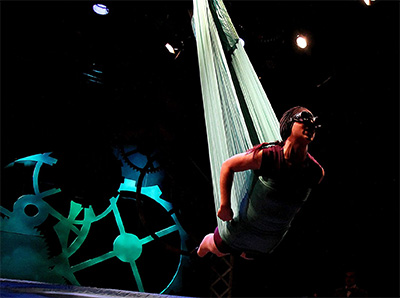 Kim Tobin-Lehl, co-artistic director of 4th Wall Theatre told me something similar when I asked about the company’s new reading series,  scheduled for March 2017. Instead of 4th Wall’s usual four-play season, they’ve opted to produce a reading series of plays by female playwrights. Tobin-Lehl readily admits cost factored into the decision but by choosing five to ten plays for the series, it also allows them to offer quality and quantity to their audience.

“I also think reading new plays is a wonderful way for people in the community to become aware of great new up-and-coming playwrights,” says Tobin-Lehl.

After my experience of being immersed in works-in-progress at the O’Neill and attending readings in Houston, I find part of the allure lies in the delight at discovering something new even if that play might not be quite formed. There’s also a bit of possessiveness if that discovery leads me to a creative work I know has the potential to be great, but that few people know yet, like discovering that brilliant artist or band long before anyone else.

When I confessed my own reasons for attending readings to Gray, he thought for a moment and then put it into terms we all can understand. “It’s like if you saw Adele in a small intimate room and now you have to see her at a massive stadium. New play readings are basically just like Adele, that’s the take away.”