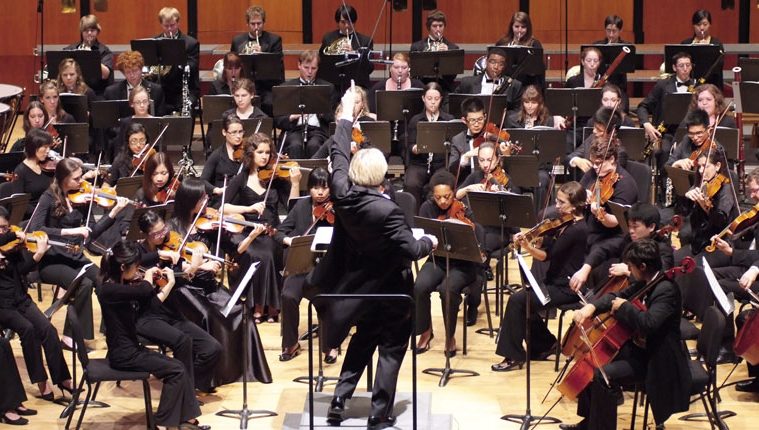 The Conductors of the Texas Music Festival

When is a conductor more than a conductor? When he (or she) is conducting the fellows at Houston’s premier summer musical festival.

The Immanuel and Helen Olshan Texas Music Festival (TMF), May 31 -June 29, is a nationally recognized summer music festival held at the University of Houston Moores School of Music.

Since 1990, it has grown into a summer festival to rival those at Aspen and Tangelwood, and this, its 24th season, garnered 350 applicants from across the U.S. (and seven different countries) for the month-long residency. Ninety-five musicians were selected to participate as fellows in the orchestra, with full scholarships, to live the life of professional musicians for a few short weeks.

The TMF orchestra gives four performances this summer, allowing Houstonians to see the stars of tomorrow as well as some of the best professional guest-artists and conductors.

This summer the conductors include Franz Anton Krager, U of H professor of conducting and director of orchestras; Horst Foerster of the Leipzig Academic Orchestra; Rossen Milanov, principal conductor of Orquesta Sinfonica del Principado de Asturias in Spain and music director of the Princeton Symphony Orchestra as well as the nationally recognized training orchestra, Symphony in C; and Carl St. Clair, a native Texan who now serves as music director of the Pacific Symphony in Orange County.

“Our goal is to provide young musicians with a real experience working with world class conductors,” says TMF General Director Alan Austin. “We are preparing them for a life in a professional symphony.”

Krager, who opens the festival, knows the situation well. “The only difference between conducting a pro orchestra and a talented student orchestra like TMF is the experience factor. Pros will already have played many of the works we program for TMF. Student musicians must be taught many of the technical demands and musical requirements, as well as the fundamentals and must learn the art of playing together as an ensemble unit. Conducting a student orchestra requires more patience, more teaching and more inspirational leadership, that’s all. The final product can be stunning because what talented students may lack in experience, they can make up for with youthful enthusiasm and sheer determination.”

Austin seeks out conductors who can provide a bridge to the professional world.

“You could put a very stern conductor on that podium, but he might not be able to coax the best performance out of the students,” says Austin. “They have to be passionate about working with young musicians and teaching them.”

This year— his fifth at TMF —  he will conduct the grand finale concert featuring Strauss’s “Dance of the Seven Veils” from Salome, Strauss’s Four Last Songs and Prokofiev’s Symphony No. 5 in B-flat Major.

“I will be here for a week,” says St. Clair, “much like guesting with a professional orchestra. But there is a big difference. These are highly proficient conservatory students and graduates — but they are here to learn. They are motivated and excited to be here, but as a conductor you have to inspire and motivate them. When I guest with an orchestra I might give them the musical goal of the piece we are rehearsing, but with TMF students you have to describe the technical way to obtaining that goal.”

St. Clair says that fellows often haven’t performed a piece they will do at TMF, and that’s one of the ways he can help them. Such as the Prokofiev piece he will be conducting.

“There is a lot to discuss and grapple with in Symphony No. 5 in B-flat Major,” he says. “With a professional orchestra I wouldn’t delve into all of that with the musicians but here I will.”

Even at home, St. Clair is an advocate of musical education for all ages, being essential in creating and implementing the Pacific Symphony education programs including Classical Connections, arts-X-press and Class Act.

St. Clair has been conducting at TMF since the mid 90s when he was first invited to come to Houston by his friend Krager. Alan Austin, who was a violinist fellow at the inaugural TMF in 1990, says it has been exciting to watch St. Clair grow as an educator over the decades.

“He’s become very passionate about working with the younger musicians,” he says. As for St. Clair, “working with Franz (Krager) and Alan (Austin) over the years has been a real blessing and a gift for me.

“I truly believe in the philosophy of the festival, training young musicians for a professional life.”

St. Clair also says that one of the things that sets TMF above other student festivals is the venue at University of Houston .

“For these young musicians, being able to rehearse daily and perform at the Moores Opera House, on the beautiful campus, is a real plus,” he says. The 800-seat, state-of-the-art opera house, opened in 1997, is considered to be one of the finest university opera facilities in the country. Oh, and as an added bonus, St. Clair’s Texas family gets to come to Houston and see him conduct.

—MARENE GUSTIN
Marene Gustin is a Houston based food and arts writer.