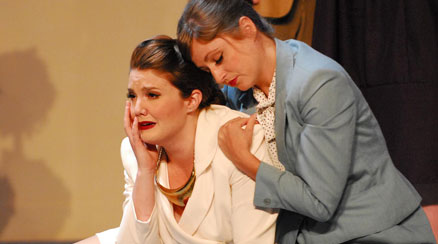 Review: Otello at Opera in the Heights

Sarah Beckham and Ann Sauder as Desdemona and Emilia in Otello, treat Opera in the Heights. Photo by Gwen Turner Juarez.

Gold medallions, check dapper suits, capsule and a man snorting heroin set the new scene of Gioachino Rossini’s Otello. Though still a tragic tale of a father’s prejudice and a daughter’s sense of duty, it is opera’s Scarface.

Rossini’s Otello is the first of two Houston opera premieres in Oh!’s 2012-2013 season (the second is Bellini’s I Capuleti e i Montecchi ). Unlike Verdi’s later (and generally more popular) version of Otello, Rossini’s Otello deviates widely from Shakespeare’s play. With Stage Director Erica Miller’s vision of a crime-riddled Venice in 1985, this production is unique in its reinvention of Shakespeare’s tragedy.

Despite the difficulty of ornamented excess in Rossini’s vocal writing, the majority of the lead singers made the music seem effortless. Tenor Eric Barry (playing Otello in the Ruby cast) sang with depth and breadth. Proving to be more than her sequin-bedazzled belt and cute shoes, soprano Sarah Beckham, playing Desdemona, impressed as she seamlessly navigated challenging high notes and cascading arpeggios.

Artistic Director and Conductor Enrique Carreón-Robledo continues to thrill with his talent and obvious enthusiasm for opera in his second season with Oh!. Under his precise baton, the orchestra delivered excellent articulation which complemented the vocal virtuosity of the soloists and chorus.

Despite the tragic ending, Oh! brings satisfying drama to a rare opera.