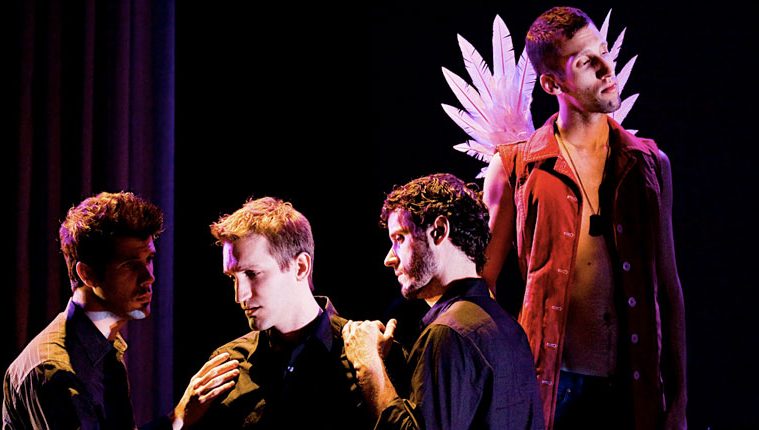 The edges of my chiffon gown tickle the red carpet and my lofty, leopard print shoes lift me onto the escalators at the Wortham Theater Center. Surrounded by the soaring whimsy of Albert Paley’s ribbon-like sculptures, I imagine the ensuing mayhem, should my dress catch in the escalator’s powerful electronic teeth, ripping the delicate purple fabric from my untanned flesh. Perish the thought.

Inside the theater, the velvet seats cozy up around me. The familiar murmur of polite chat pitter-pats under the endearing cacophony of musicians in the pit, as they glide over sundry musical passages. The lights dim and patrons hush; the orchestra tunes, and applause erupts as the conductor appears. It is opening night, and some of the finest singers from the far reaches of the planet will grace the stage. Oh, no! I’ve forgotten my opera glasses. Drat.

While the soprano’s high notes soar through the opera house, concurrently, all across Houston, there are other music makers making music, and other singers singing songs — and many of them live right under our noses, perhaps no farther than the neighbor next door.

Michael Walsh is a singer who has made Houston his personal and professional home, and enjoys a solo, ensemble, and teaching career. A graduate of the Cleveland Institute of Music and Rice University’s Shepherd School of Music, Michael has sung with Houston Grand Opera’s Opera to Go!, Opera in the Heights, Divergence Vocal Theater, Amarillo Opera, Central City Opera, and Utah Opera. Now, his focus is on music education and singing with Houston Chamber Choir, a classical music gem, founded and directed by Robert Simpson. Michael recalls hearing the choir for the first time, performing Bach’s Mass in B minor at Christ Church Cathedral.

“It was standing room only, and I remember standing in the last possible space for two and half hours, and I was riveted,” says Walsh. “I was spellbound. The next day I called Bob [Simpson] and said, ‘I have to be in this group.’”

Walsh has been singing with the choir for the past five seasons, and he thrives on the group’s camaraderie, professionalism, and commitment to engaging audiences through music.

“Each season it gets better. We love coming together to make world class music,” says Walsh. “We sing the great masterpieces, and really everyone in the choir has to be a virtuoso of their instrument or it just doesn’t happen; it’s being in a rare group of people where everyone is on their A game.”

Walsh is equally passionate when he talks about passing on the art of singing to his students at Lone Star College Montgomery and Sam Houston State University.

“When I was in college, it never occurred to me that, one day, the great love of my life would be teaching. In retrospect, everything was preparing me to become a more informed teacher. It became something I loved, especially when I started seeing my students succeed. I love giving back; it sounds cliché, but I do. Teaching is my favorite thing.”

Dennis Arrowsmith is another singer hailing from Rice University’s Shepherd School of Music. Like Michael, Dennis has carved out a singing career here in the Bayou City. He can be heard with Houston Grand Opera’s renowned chorus, or as a soloist with HGO’s Opera to Go!, and  — perhaps at his finest when touched by comedic genius — in leading roles with The Gilbert and Sullivan Society of Houston. Arroswsmith sees Houston as a boon for singers of all stripes.

“Houston is as diverse artistically as it is ethnically. One can sing with long established organizations or blaze new paths, and there’s a hungry audience for both,” says Arrowsmith. “In a city that’s ever growing, there is room for performances of all sizes — limited only by imagination and gumption.”

Shannon Langman Smith has imagination and gumption in spades, creating a niche for herself as a singer, music educator, and photographer. A graduate of University of Houston’s Moores School of Music, she is a frequent concert soloist with Memorial Drive Presbyterian Church under the baton of Houston Symphony Chorus director, Charles Hausmann. As a music educator, Smith produces recitals with professional singers and students, and she uses her photographic skills in service to young singers at the start of their careers.

“I have felt fulfilled and accepted in the Houston arts community like no other place, giving me freedom to stretch the possibilities of the artist I want to become, and open myself to mentor others,” says Smith.

Houston’s singers grace our grand opera, recital halls, churches, alternative venues, universities and schools. They likely live two doors down, just around the corner, or if you’re lucky, even upstairs — doing what artists do best: enriching our lives with music and enhancing the cultural landscape of our city.