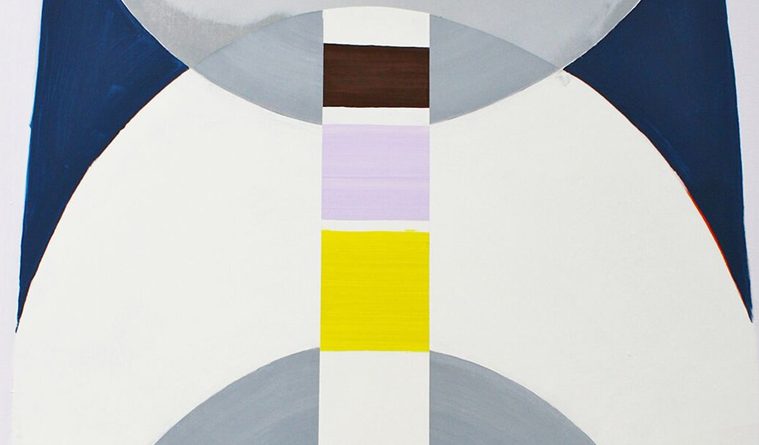 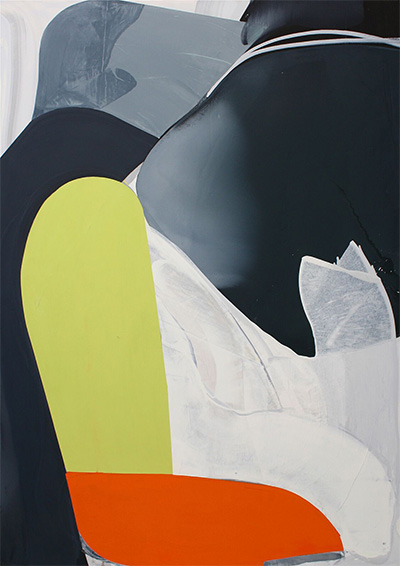 “I’m not a sarcastic painter,” Marcelyn McNeil tells me near the end of our conversation in her east Houston live/work space. She has just finished explaining the title of her upcoming solo effort at Dallas’ Conduit Gallery. Love and Theft, on view Sept. 10-Oct. 15, is a nod to her commitment to the old-school practice of painting and an acknowledgment of the constant appropriation and regeneration of formal abstraction in today’s teeming art world.   In the self-contained environment of her studio, the artist keeps the “art world” out, dealing with each painting on its own terms.

There is little in the way of clutter in McNeil’s series of open rooms, and canvases are leaned against the walls in various stages of completion. It’s a rare rainy day in late July and jazz wafts from some place in the house.

Of her work, McNeil says, “I feel like I have no subtlety.” At times this lack of nuance is striking, almost graphic. The bright matte colors cheerfully assert themselves upon the surface of the paintings as seemingly immutable forms. But under their bold facades are carefully worked and reworked passages. A painting usually takes “about a month,” she says. “I work on three or four at a time.”

“I want to address people bodily,” McNeil says of the scale of her work, which qualifies as large, but never stretches beyond about seventy inches. “The paintings are all about relationships between shapes and color. I don’t work serially ever,” McNeil declares, “I figure out a painting as I go.” What appears effortless and crisp in a digital  photograph of the work is, in fact, the hard-won seeking out of an image, which only synthesizes because of McNeil’s almost brutal objectivity as a painter. “[This is] a discovery process. The paintings are discovered while I’m working on them.” They come off as bold and fresh, the whites almost airy, because she is entirely willing to slice them up and turn them into floor tarps if they don’t “work.” She estimates that roughly “25 percent gets thrown away.”

It’s an attitude that has translated beautifully into her works on paper, which McNeil began experimenting with at a residency several years ago. “I work with two and three layer systems,” she states, delighting in the “little bit of shadow” produced by the layered paper. When I first encountered these pieces (several iterations ago), they were literally binder-clipped together. 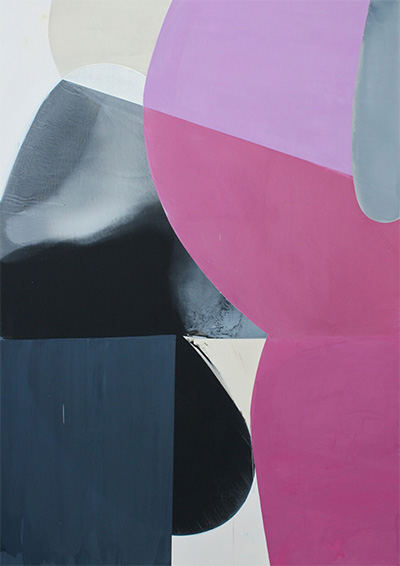 Almost shocking in their temporality, they were more of a proposal than a painting, a daring “what-if.” The many smallish paper pieces that McNeil will include in Love and Theft are not binder-clipped, but they will be exhibited without frames against a painted wall. Some include intricate weaving, and others reveal chunks of the wall behind them. In the paper works, McNeil shows little reverence for her chosen medium’s traditional rectilinear boundaries.

Before the opening of Love and Theft in September, a residency at the Vermont Studio Center in October, and an upcoming spring show at Houston’s Anya Tish Gallery, McNeil took the beginning of this year to “slow down a bit and get off the treadmill.” The result has been paintings that are “a lot busier than the old work.” A milky wash in a painting called When Things Settle Out reveals a new layer of risk-taking in her work: the pouring of paint which results in more “atmospheric” depth. McNeil knows she is “definitely working within a specific vocabulary,” but the work feels startlingly fresh precisely because we can see her constantly instituting and then testing the parameters of her own experiments.

“It’s almost impossible not to step on each other,” the artist says of her contemporaries in the painting field. Because of this tendency toward “theft,” whether intentional or incidental, McNeil eschews social media, although she has some conflicting feelings on the subject. She seems to have come to the opposite conclusion than many people, for whom more exposure and quantifiable “likes” generate an addictive (if small) daily dopamine fix that lifts us temporarily from the slog. Between the staccato tapping of the rain on the roof and the engulfing paintings around us, all of that digital chatter does seem superfluous. She adds, “Images are powerful things.”