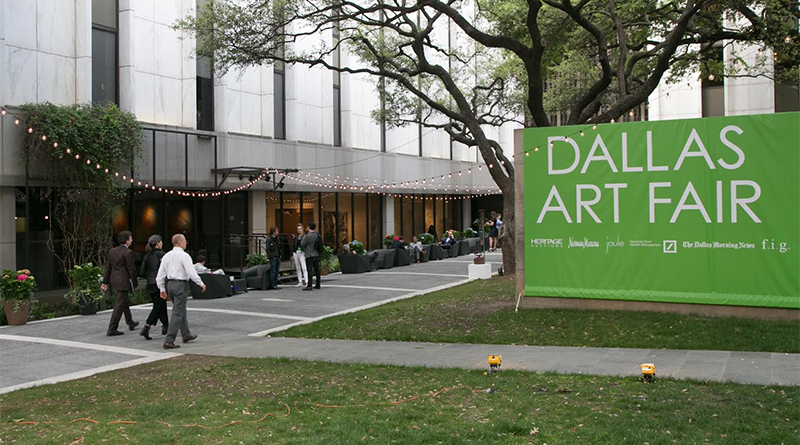 Painting the Town: The Dallas Art Fair Grows in Its Ninth Year

Chris Byrne and his co-founder, John Sughrue didn’t expect the Dallas Art Fair to grow like it has when they began the annual event nine years ago with 35 participants.

“We never started with the goal of 97 galleries,” Byrne says. And this year’s fair, which kicks off Thursday, April 6 and lasts through Sunday, April 9, is shaping up to be its most impressive yet. Set against the sprawling backdrop of the Fashion Industry Gallery, visitors will sample galleries from all over the world, while participating in the simultaneous Dallas Arts Week that Mayor Mike Rawlings introduced five years ago. Byrne is particularly proud of the week’s schedule, which works in tandem with openings all over town. “It’s really sort of pulling the best things and using the local community as a resource,” he says.

This year’s events coincide with the Nasher Prize Gala, the opening of an exhibition at The Power Station featuring the work of multimedia artist Steven Parrino, and the opening of exhibitions by Pia Camil, Keer Tanchack, and Ambreen Butt at the Dallas Contemporary. “It’s almost like there’s a real consistency in terms of the scheduling, although the content obviously is changing year to year,” Byrne says.

The local galleries love it because of the easy access for the Dallas community. People love art but they don’t always have time to keep up with the local scene, says Cris Worley, owner/director at Cris Worley Fine Arts

“It is an incredible way to reach out to the community at large, because there are a lot of people in Dallas interested in contemporary art, but they don’t necessarily make gallery going part of their routine,” Worley says. “They get to see Dallas galleries by comparison to galleries from other countries, from other cities of the country, and I think that they find that they are quite pleased with what they have in their own backyard.”

One highlight of the nearly 100 galleries (30 of which are new) in attendance this year is the world-famous Gagosian Gallery, which is participating for the first time ever. “We’ve been discussing it for several years,” Byrne says. The lauded network of galleries will present an entire booth (F2) featuring artist Piero Golia, who showed his Chalet Dallas work at the Nasher Sculpture Center last year. This year he is presenting Mariachi Paintings, featuring a series of 12 canvases made from the Looney Tunes-inspired backdrop used in the finale of his Chalet Dallas piece.

While famed international galleries are making their Dallas debut, local galleries are holding their own. In addition to several of their longtime artists, Cris Worley Fine Arts is featuring must-see pieces by artists that they’ve just begun working with, including the “process-driven” work of New York-based Robert Sagerman, whose paintings are inspired by his studies of Medieval Jewish mysticism and the idea that the repetitiveness of his art can empty the mind. Each piece is appropriately named with the number of strokes used to produce it. “They are very thick, and very tactile, and very luscious,” says Worley. The gallery will also be presenting the edgy, realist florals of New York-based Marc Dennis, who received his MFA from the University of Texas at Austin, and who is collected locally by philanthropist Nancy Rogers. “They’re very sexy and very, very beautiful.”

One of the pieces Worley is most looking forward to is a 78” by 104” oil painting by one of her longtime artists, Paul Manes. “There’s some political concepts behind this particular body of work,” she says.

Fellow Dallas gallery, Conduit, will be presenting pieces from some of their longtime artists including Susan Kae Grant, Kirk Hayes and Stephen Lapthisophon, says owner and director Nancy Whitenack.

As for the collectors, it’s a mix of Texas art lovers based close to home and out-of-towners looking for the next big gem. “I want to really credit Dallas and the institutions,” Byrne says. “I mean I think that there’s real excitement nationally and internationally about the city and the city’s contribution to visual arts.”

In an effort to reach deeper into the community, students can get free admission to the fair on Sunday, April 9 and will receive access to specialty programming that day. Students will see firsthand that this year’s impressive roster of participants is a testament to Dallas’ expanding art scene. “More than ever now, artists and dealers are looking to Dallas as an incredible resource and an incredible venue for showing and working in the market,” Worley says.