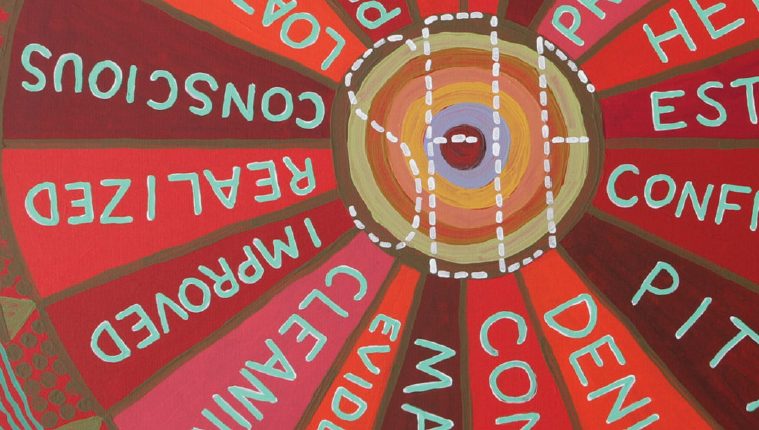 Shimmering mosaics in Ravenna, here meticulously woven textiles in the Middle East and suggestive labels in mass produced clothing are among the many inspirations for Dallas artist Pamela Nelson. For the past 30 years, she has been creating work rooted in contemporary American culture, as well as in ancient crafts. Her upcoming exhibition, “TEXTiles”, opening November 19 at Craighead Green Gallery, synthesizes many of these different strands.

Additionally, she is completing commissions for two of the city’s most important new buildings, the Dallas Convention Center Hotel and Parkland Hospital. Nelson has a wide-ranging world view from years spent living abroad as well as from time spent serving on the US Commission of Fine Arts, a presidential appointment that she has held since 2001.

She spoke with A+C contributor Nancy Cohen Israel about her upcoming show and future projects.

A+C: The exhibition’s title, “TeXTiles,” is ripe with meaning. What do you hope viewers take away from the work?

PAMELA NELSON: “TEXTiles” implies multiple meanings. I have been intrigued by word play for some time and have been revisiting earlier work based on game boards. The games we play are meant to give us glimpses into who we are. They are also responses to our current times. For this exhibition, I painted “Self Without End” and I’m thinking of current culture and books such as “Self Matters” and “Make Yourself Matter.” The exhibition’s title also refers to hand worked textiles. The geometry of the hand is important to me. While traveling, I have noticed that work done primarily by women, particularly textiles, rugs and quilts, is often viewed more as craft than as art even though it affects the most people. “Exclamation Quilt” is a fusion of textiles and words. Using 32 individual pieces, I created a “quilt” of exclamations. Early in my career, I studied graphic design and did some freelance work as a designer. I am still interested in typography, one of the inspirations for this work.

“TEXTiles” is also about technology, typing and texting. There are many typos that autospell makes and that human fingers make that become ironic. Additionally, I am fascinated by hand painted signs. “Flag Day” is a diptych that has been influenced by these signs. It could be renamed “Flag Minute” since that is about the length of our attention span. We have the freedom to be as dumb or misinformed as we want to be. And that is tied up with the fate of the United States. Finally, labels of all types interest me as they provide a shortcut way of thinking. I worked with the homeless at the Stewpot for many years and found that there are so many labels for that population. In many cases, they completely miss the mark for the individuals within it. One of the larger works in the exhibition, “Errata,” has that label woven and blending into a quilt-like pattern, bringing together all of these threads. The exhibition will also include a wall of “mosaics.”

How do those differ from the rest of the work?

Every show needs a surprise. In this case it will be the “Light Perpetual” series. When I was in Ravenna, I was struck by how each unique tessera had been hand placed to create a magnificent whole. “Light Perpetual” tries to capture that, using individual sequin mosaics stitched into larger circular patterns and sewn onto handmade Indian paper. Each sequin is placed by hand with a different angle of reflection, meant to capture the ethereal quality of light. The circle figures prominently in much of my work, representing eternity as well as the primary geometry of repetition.

Describe some of the sources of inspiration for your work.

Early on, I was inspired by the embroidered appliqués that my grandmother made. That led to looking at work traditionally done by women. I had the unique opportunity of living in Europe as well as the Middle East. Both places gave me an appreciation for native textiles, sacred geometry, rose windows and game boards. As a result of these experiences, I have drawn connections with quilts, textiles, carpets, borders and patterns as well as the two-dimensional game boards that speak to ornament and order.

How do your upcoming public projects relate to the spaces for which they are being created?

“Game Dallas” will be installed in the Convention Center Hotel. It is a 6’ x 8’ acrylic on canvas of a game board showing interwoven paths of hand written destinations. With Game Dallas sitting in the middle, paths featuring the city’s most interesting destinations radiate and retrace onto themselves, creating its own unique topography and giving visitors an idea of local places they should see.

The Parkland project is particularly exciting. I have designed a 4’ x 8’ embroidered tapestry for the new lobby that will be a collaborative piece with six different embroidery cooperatives in rural Honduras. For the past six years, I have been working with Honduras Threads (www.hondurasthreads.org) to bring work to these communities and enable the women in them to support themselves, their families and their communities. For this project, I designed a tapestry with a world map in the middle. A border listing the 100+ languages that are translated weekly at Parkland lines the perimeter. This work shows not only the community formed by the hospital but also the one formed by this larger group of women whose craft will be recognized for the art that it is.