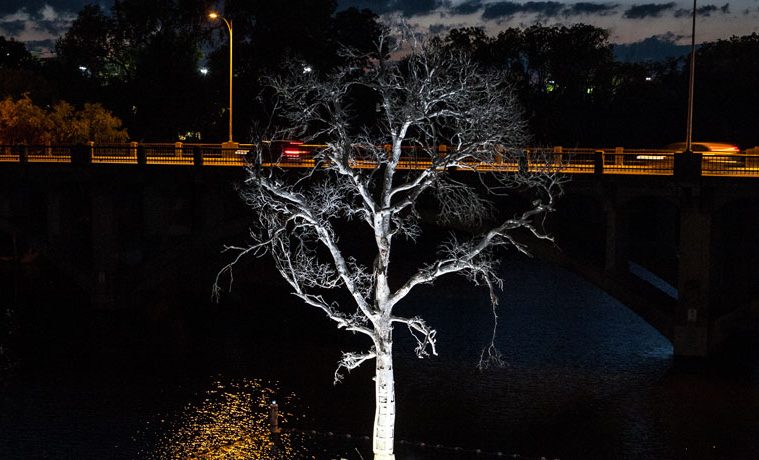 EDITOR’S NOTE: Since this story went to press, the THIRST tree has been severely damaged by flooding in Austin. Women & Their Work is trying to raise $15,000 for repairs. Click here to donate. 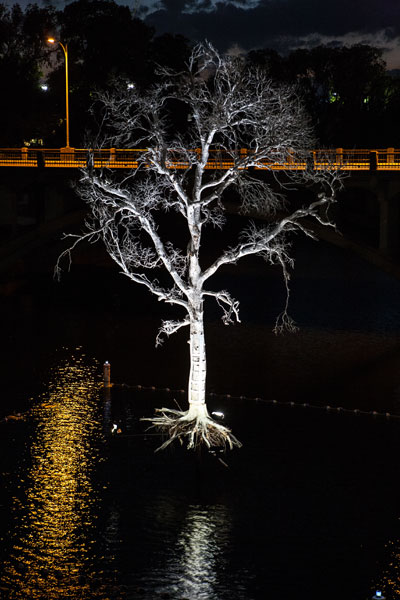 Central Texas has undoubtedly faced hardship over the past two years. In 2011, a drought left the Texas landscape barren and dying. It was the longest dry spell Texas had faced since the 1950s, lasting a solid seven months without any substantial rain to alleviate farmlands and fill water reservoirs. Crops dried up. Animals turned to skin and bone as opportune grazing fields became brown.  Lake levels plummeted. Adding insult to injury, a season of dry, harsh weather brought on relentless wild fires, the most notable of which destroyed 25,000 acres in Bastrop County during November of that same year.

The drought was a story of rural life facing problems that seemingly had no solution. Livelihoods, the totems of hard work and perseverance that are engrained in Texas mythology, were burned down in an instantaneous wave of flames. The pain and exhaustion felt by victims and their families was devastating. But, in many ways, these stories existed on the periphery.

Women & Their Work Gallery took up the challenge of bringing these natural concerns to a larger stage. For the THIRST on Lady Bird Lake project, executive director Chris Cowden collaborated with architects Emily Little, Norma Yancey, landscape architect Cassie Bergstrom, and UT associate professor Beili Liu to install a public art piece that depicted this loss of natural life. THIRST emerged from not only a unification of creative minds within the city, but also through a large grant from the Robert Rauschenberg Foundation’s Artistic Innovation and Collaboration Project. It seeks to commemorate the 300 million trees that perished during the drought and to instigate a larger conversation about the water shortage Texas is facing in upcoming years. 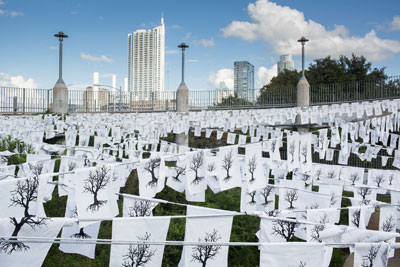 THIRST is a site-specific installation located in the heart of downtown Austin within eyeshot of the Lamar pedestrian bridge. It is comprised of a 30-foot tall dead oak tree, painted white, sitting atop Lady Bird Lake, and 14,000 white prayer flags that bear the image of the dead tree which line the Lake’s trails. (Please note that the tree was already dead and excavated from private land for this particular use, instead of being discarded to a local landfill.)

The tree’s roots jut out desperately to reach the lake below but are unable to quench their thirst, an allusion to our insatiable desire to maintain a lifestyle dependent on unsustainable water resources. The prayer flags drape runners and passers-by with the reminder of the trees that once were and the conditions that still plague Central Texas. THIRST is an expansive project that reaches into the epicenter of Austin’s outdoor scene and has received notable attention from the city’s inhabitants.

However, the symbolism expressed by THIRST is unfulfilled. The project becomes another visually appeasing attraction within Austin, an aesthetic talking point for residents, without raising serious questions about environmental concerns or prompting deeper responses from viewers. Its assumed juxtaposition of recent natural plights and future water complications is lost in the visual amalgamation of sculpture and screen-printed flags. At first glance, it’s hard to even comprehend the project, let alone to connect with the human stories of the drought’s toll. 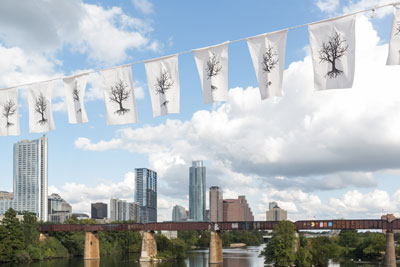 To further emphasize the artists’ desire to start a conversation about environmental concerns,THIRST launched an online initiative to document the project from the audience’s perspective with the hashtag #THIRSTART.  Many of the tweets offer short recitations of the project’s mission without any further positing. Some don’t even include a description, just a snapshot of the flags or tree, while some users claim the sculpture is a spooky installation done by the city in preparation for Halloween. The reasoning behind #THIRSTART is either copied directly from the project’s placards or is simply overlooked entirely. With this audience documentation, THIRST boils down to a snapshot shared online. It’s disheartening to see a project that speaks to a dramatic, dangerous turn in Texas’ cultural and ecological history so readily commodified.

Of course, the impact of THIRST on Austin is still unfolding, and there is still time to clarify the project’s intentions for its audience. But given THIRST’s siting in a location known more for its exercise trails and social components than a place of reflection, it feels merely like a decoration of one of the city’s hotspots.