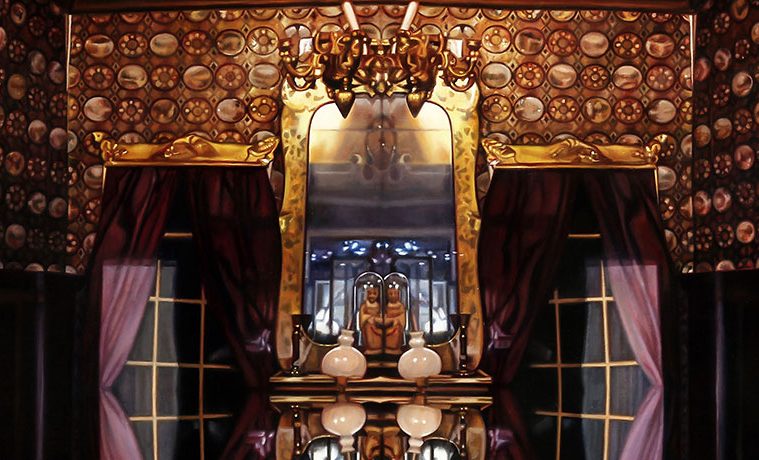 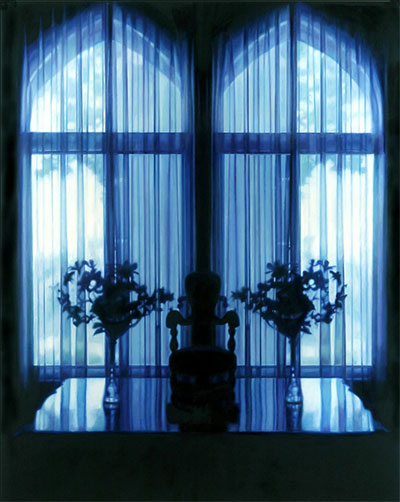 With Parallel Spaces Cris Worley Fine Arts opens the first solo exhibition of Patti Oleon’s mysterious paintings.  Based in San Francisco, Oleon is represented on the west coast by various galleries and her work has been exhibited in several museums in California and beyond.  This show brings her work to an entirely new audience in North Texas where it will certainly delight viewers.  Described in the press release as a “conceptual realist,” her work begins with photography and morphs through computer editing into a final image, which she transfers to either oil on linen, panel, or both.

The images themselves, eight in all, depict interior spaces that are unpopulated by figures, the only exception being Holy Bravado, 2013. In this painting, floating putti and regal figures with flowing drapery are the images in a painted ceiling from a historical period that ranges from the Renaissance to the Rococo. In this large painting the ceiling mirrors itself and turns horizontally as if hinged in the center, and the play of light forms the viewer’s entry point.  In this case, brilliant yellows and blues provide the skillfully rendered “backlighting” that the figures play off of. The source could easily be a ceiling fresco by Andrea Pozzo or Giovanni Battista Tiepolo.

Oleon’s work may also bring to mind the photography of Candida Hofer, whose interest in the interior spaces of historical buildings has produced monumental imagery.  Both reduce the spaces to the built environment, but where Hoffer investigates “objectivity,” Oleon constructs reflective and layered visual puzzles and conundrums.

In art history there are significant examples of the interaction between perceptual metaphysics and painting:  Velazquez’ Las Meninas, 1656, Manet’s A Bar at the Folies-Bergere, 1882, and Picasso’s Les Demoiselles d’Avignon, 1907.  Issues raised by these works about reflection, space, and the indecipherable pathways of vision they depict have left much for historians and philosophers to ponder in countless accounts and arguments for years, with no definitive resolution.

Oleon takes the problem a step back by concentrating on a depopulated perspectival space that challenges the viewer to accept her reorganization of reality.  Nowhere is this more pronounced than in Helix, 2013, a roughly 53×53 inch, square shaped painting that features two mirrored, curving staircases in light blue, floating magically in front of each other and flanked by two empty ornamental archways that border the left and right edges of the canvas.  The title refers to DNA and the painting, like DNA Oleon contends, defies total understanding.  Other shadows appear between the main staircases that look like the same structures, only turned on their axis and in darker hues.  Are they reflections or perhaps the same ones from an alternate time and place, fused by the artist into a type of whole?  Might she suggest that multiple dimensions can come together in painting?

These are the types of questions that will come to mind as visitors absorb the color and depth of each of the paintings.  Almost mesmerizing and whimsical at the same time, the paintings also represent the continued vitality of painting itself, a pursuit that continually reinvents itself in the face of so many detractors that never fail to proclaim its demise again and again.